In 1891, after obtaining a new 30-year franchise, the Toronto Railway Company went to work electrifying Toronto’s streetcar system. The TRC was a private company, led by William Mackenzie and James Ross. Mackenzie made his fortune in railway construction; together with Donald Mann, he would go on to build a railway empire before it collapsed by the end of the First World War. Mackenzie would also control other street railway and interurban lines in Ontario, including the Toronto and York, the Toronto Suburban, and the Niagara, St. Catharines, and Toronto.

By 1894, the TRC became fully electrified, providing quicker and more reliable service. In the twenty-five years that followed, new electric railways radiated out of Toronto to points such as West Hill in Scarborough, Port Credit, Woodbridge, and even as far away as Lake Simcoe and Guelph. But after a short sprint of service expansion within the City of Toronto, the TRC refused to extend its services beyond Toronto’s city borders of 1891. The City of Toronto was forced to form its own public streetcar company in 1911, and became determined to take complete control over urban transportation services once the TRC’s franchise came to an end.

Maps presented only show revenue routes, including peak period variations and some seasonal routes, such as Exhibition services. I omit some minor service and route changes. I welcome constructive feedback as I plan to re-publish these maps elsewhere.

Electrification of the Toronto Railway Company began when the Church Street line was converted on August 16, 1892. The last horsecar made its trip on McCaul Street on July 18, 1894. The TRC extended several routes in Toronto’s west end, including King, Dovercourt, Bloor, Dundas and Carlton.

The Davenport Street Railway Company began operations on September 6, 1892 between Toronto Junction at Keele and Dundas Streets, and Bathurst Street at the CPR tracks, a short walk to TRC Bathurst Cars. The Weston, High Park & Toronto Street Railway Company began operating the same year within the Junction, from Evelyn Crescent to Keele Street, later extending east to the Toronto City Limits at Humberside Avenue. These two companies merged in 1894 to create the Toronto Suburban Railway.

The Toronto and Mimico Railway was the city’s second radial. After a troubled start in 1892, it extended west to New Toronto by 1894. The Toronto and York built east from Queen Street and Kingston Road to Blantyre Avenue in Scarborough Township. Two short spurs served the town of East Toronto (near today’s Main/Gerrard intersection) and down to the Beach.

END_OF_DOCUMENT_TOKEN_TO_BE_REPLACED 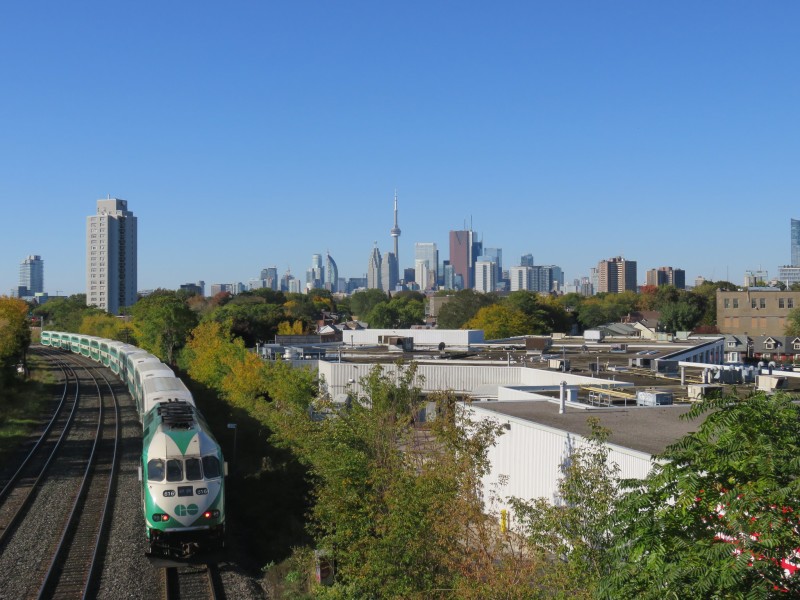 GO Transit train from the Pape Avenue footbridge, near the proposed site of Gerrard Station

At its last board meeting on December 8, Metrolinx presented an update on the status of twelve new GO Transit rail stations, all located on existing lines. Eight of these proposed new stations are located in the City of Toronto; and six of those are station locations once promised as part of John Tory’s SmartTrack proposal. Unfortunately, the proposed new station designs (all available in this Metrolinx report) appear to be similar to existing GO stations in the suburbs, with needlessly large bus loops, PPUDOs, and parking lots. Development opportunities are limited.

Transit connections at some proposed stations, like St. Clair West, are poor or practically non-existent. This is rather unfortunate, as SmartTrack was originally proposed as a frequent, subway-like service between Mississauga and Markham, with full TTC fare integration. Today, it’s merely six additional stations on existing GO Transit rail corridors. Without quick and seamless connections to the subway and surface TTC routes, the ability to provide any transit relief is compromised.

I have more to say on this at Spacing Toronto.

Over the last few months, I have researched many books and maps and created a series of maps that attempt to illustrate the history of Toronto’s street railways, from 1861 to the present. Toronto is one of only a few cities in North America to continually operate a street railway network (others include Boston, Philadelphia, San Francisco, and New Orleans), which remains one of the busiest and most expansive tram systems in the world.

Before the Toronto Transportation Commission was created in 1921, Toronto was served by several private streetcar firms. The Toronto Street Railway, which began operations in 1861, built Canada’s first streetcar system; two routes were opened that year, with small railcars pulled by horses. The TSR’s successor, the Toronto Railway Company, electrified the network, but with few exceptions, refused to expand it beyond Toronto’s 1891 borders. Only with the creation of the publicly owned TTC was Toronto’s streetcar system unified and modernized to be the envy of cities across the continent.

Creating these 38 maps was a challenge, because published materials covering the pre-TTC era (before 1921) are sparse. William Hood’s Street Railways : Toronto: 1861 to 1930 provides some history of Toronto’s earliest transit services, but with only some details. I also consulted Transit Toronto’s route histories and other books such as Robert M. Stamp’s Riding the Radials and John F. Bromley’s Fifty Years of Progressive Transit which covers the years from 1921 to 1971.

This post, the first of three, will cover the years from 1861 to 1891, the era of the Toronto Street Railway (TSR), when horse power ruled the streets. I do not cover every year, and I omit some minor service and route changes. But this, I hope, accurately illustrates the rise, fall, and renaissance of Toronto’s streetcar system.

1861
The TSR begins operations on September 10, 1861, serving a small provincial city of less than 50,000 people. The first route, Yonge, operates from Yorkville Town Hall, just north of the city limits, to St. Lawrence Market at King and Jarvis. A second route, Queen, was established in December of 1861, running between the market and the Ontario Hospital at the corner of Dundas Street, now Ossington Avenue.

END_OF_DOCUMENT_TOKEN_TO_BE_REPLACED 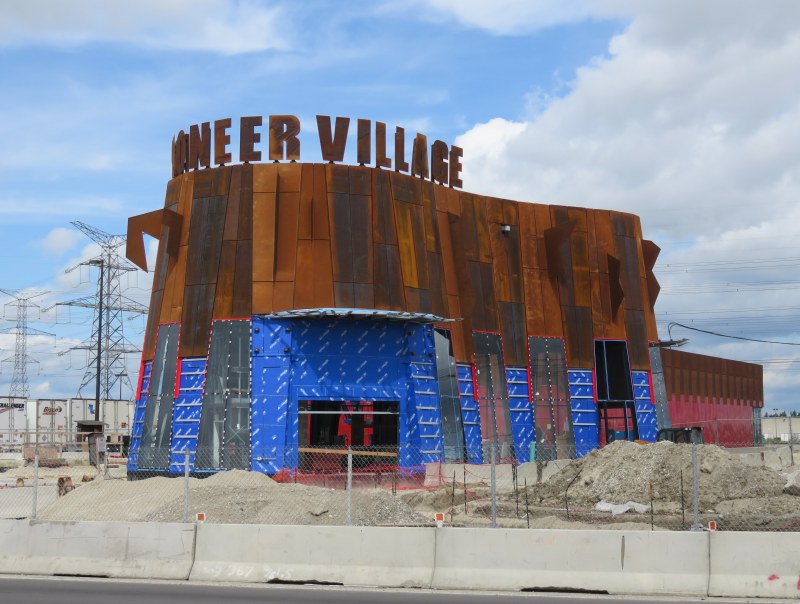 By the end of next year, the Toronto Transit Commission (TTC) Line 1 subway extension to Vaughan will finally open, two years later than originally planned. The line will provide relief for thousands of York University students and employees and improve service to transit-starved northwest Toronto. It will terminate at Highway 7 in Vaughan, at the ambitiously (and in my view, ridiculously) named Vaughan Metropolitan Station, posing a challenge to cartographers and designers everywhere.

When the $3.2 billion subway extension begins operating in December 2o17, it will be the first new major subway project since the opening of the five stop Sheppard Subway in 2002. It is also the first subway line to cross the City of Toronto boundary. (Coincidentally, this subway extension will cost the same as the proposed one-stop extension of Line 2 to Scarborough Centre.)

Aside from the delays, the big price tag, and the silly Vaughan station name, there are two more issues that will arise, and which have yet to be completely figured out: how four separate transit agencies will re-route their buses once the subway opens, and the necessary question of fare integration once that happens.

END_OF_DOCUMENT_TOKEN_TO_BE_REPLACED

Note: This article was previously published in Spacing Toronto on April 13, 2011.

One of Toronto’s greatest debates concerns Yonge Street’s controversial claim as “the World’s Longest Street.” Indeed, the Guinness Book of World Records published Yonge Street’s status as the true record until 1999; a bronze art installation in front of the Eaton Centre at Yonge and Dundas has a map of Yonge Street extending to Rainy River.

This claim rests on the rather tenuous claim that that the 1,896 kilometre length of Yonge Street from Queen’s Quay on Toronto’s Harbourfront to Rainy River via Highway 11, at the Minnesota-Ontario border is in fact, the longest continuous “street.”

While a popular claim, I’ve been a skeptic of this local legend. Highway 11 and Yonge Street have never been one in the same, especially after the downloading of Highway 11 south of Barrie by the Harris government in the late 1990s.

In 1920, Yonge Street was added to the Ontario provincial highway systemas Highway 11, which extended from Downtown Toronto as far as the end of Simcoe County, at the Severn River north of Orillia, where an unnumbered highway continued through the unincorporated Districts of Muskoka, Parry Sound and Nipissing to North Bay. In 1937, Highway 11 assumed the Severn River-North Bay portion and the newly-completed North Bay-Hearst section.

During the Second World War, the section between Nipigon and Hearst was completed; it finally provided a complete provincial highway link between the Manitoba and Quebec borders and formed a crucial part of the Trans-Canada Highway until the more direct Highway 17 link from Sault Ste. Marie to Wawa was completed in the 1960s. Indeed, Highway 11 could still claim as the longest signed route within a sub-national entity but several national routes, such as US Interstates and US highways, are longer. In fact, the last reference to Yonge Street on Highway 11 north of Holland Landing is a short section of former Highway 11 in south Barrie.