There’s an episode of The Simpsons where Homer Simpson changes his name to Max Power, after he’s ridiculed for sharing the name with a buffoonish television character. It’s not a great episode — it came out at the time the show was in transition from its glory years to the “Zombie Simpsons” era — but it has a few good laughs.

On important transportation projects, the John Tory way is the wrong way, but costlier. We’ve seen this several times during his mayoralty.

When it came time to replace the underused eastern section of the Gardiner Expressway, Tory and his suburban allies on council voted in favour of a more expensive “hybrid” option that maintains much of the elevated highway, instead of a cheaper at-grade option that would provide a better pedestrian realm on the Eastern Waterfront and better support new development.

In Scarborough, Tory stubbornly supports building a one-stop subway extension that was last estimated to cost $3.35 billion dollars, instead of supporting a seven stop LRT route from Kennedy Station that would extend the existing grade-separated Scarborough RT route to Centennial College and Sheppard Avenue. A proposed SmartTrack station at Lawrence East (whose estimated construction cost has risen from $26 million to $155 million) may not be able to be built while the Scarborough RT is still in operation.

And on February 27, Toronto’s Public Works and Infrastructure Committee (PWIC) voted against plans backed by city staff, the local councillor, John Filion, and many residents and road safety advocates, to transform Yonge Street in North York Centre between Sheppard and Finch Avenues. This section of Yonge Street is due for reconstruction, hence the opportunity to rethink the street to better serve the community.

The REimagining Yonge Street plan seeks to improve the pedestrian realm with widened sidewalks, would add new cycling infrastructure. To make room for these improvements, two traffic lanes — used for street parking outside of weekday rush hours — would be removed. This stretch of Yonge Street has seen many new condominium towers built over the last decade, and there are three subway stations serving this stretch of Yonge Street.

Mayor Tory, who has the power to select committee chairs and members, stated his preference for the status quo on Yonge Street, suggesting that the bike lanes be moved one block west, to Beecroft Avenue. PWIC moved for this alternative option as well, even though city staff reported that the change would cost an additional $20 million.

The decision to maintain the status quo on Yonge Street benefits commuters outside of Toronto more than local residents, so it is puzzling why Mayor Tory has declared his support — once again — for an option that puts drivers first. Nearly three-quarters of rush-hour drivers on Yonge Street through North York come from York Region. A majority of residents take transit, walk, or cycle; they would benefit from a safer, more pleasant street. Moving the bicycle route to Beecroft Avenue serves to move cyclists out of the way of cars, rather than providing a direct route with better access to transit, shops, and homes.

With Doug Ford focused on the Ontario Progressive Conservative party leadership race, there are — as of yet — no high-profile challengers to Mayor Tory’s re-election bid. There is no need to pander to a voting bloc angered by a so-called “war on the car” unless Tory actually supports suburban commuters over his own constituents. And this decision will only cost more money.

Once again, Mayor John Tory has chosen the wrong way. 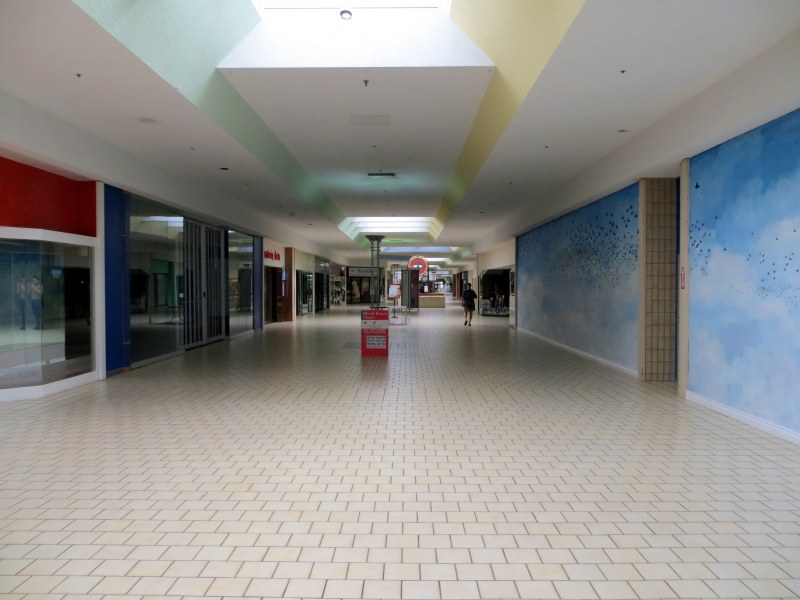 Bayside Mall, formerly the Sarnia Eaton Centre, on a Saturday morning in 2013. Most stores are vacant or occupied by non-profits or independent businesses.

The Toronto Eaton Centre, large, famous, and vital, is only one of many malls built in the downtown cores of Ontario cities between the 1960s and 1990s. From Thunder Bay to Cornwall, the construction of new enclosed shopping centres were seen as a necessary tool to keep the old city centres vibrant and relevant in the face of competition from new suburban malls. But only in the province’s two largest cities did the concept work. Elsewhere, these urban shopping complexes were left largely vacant within ten years of opening, when leases expired. When the Eaton’s department chain went bankrupt in 1997, huge voids were left behind that developers and municipalities struggled to fill.

The Toronto Eaton Centre was opened in two phases between 1977 and 1979. It added hundreds of shops and new office space to Downtown Toronto, anchored by a new Eaton’s flagship and was connected to the Simpson’s store across Queen Street. Today, the Eaton Centre is Canada’s second largest mall (including the Hudson’s Bay/Saks Fifth Avenue building) and the Toronto region’s second most productive shopping centre in terms of sales per square metre. In Ottawa, the downtown Rideau Centre, opened in 1983, is the busiest and most productive mall in that region (Retail Council of Canada, 2016).

But elsewhere in Ontario, downtown malls — mostly built with municipal and/or provincial government support — have been, without exception, commercial and urban development failures. Not only did they suffer from high vacancy rates, they helped to wreck the downtown cores they are located in rather than foster the economic revitalization they once promised.