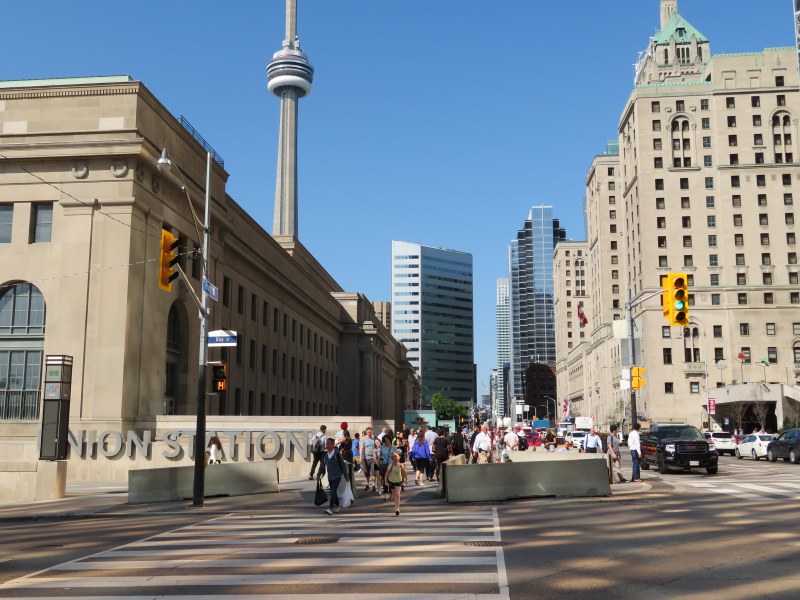 Last year, the City of Toronto hastily installed Jersey barriers in front of Union Station. This was a response to a tragic criminal act on Yonge Street in North York on April 23, 2018. A single individual drove a rented cargo van down the busy sidewalk, killing 10 and injuring 16 more before he was apprehended by police. As one of Toronto’s busiest pedestrian areas, city officials decided that the plaza in front of Union Station required special protection in the wake of the attack in North York.

Sixteen months later, the temporary barriers remain, needlessly restricting pedestrian flows. Temporary Jersey barriers, normally used on roadways to protect construction sites, are long and awkward for pedestrians, making it even more difficult to access some of the city’s busiest crosswalks. During peak periods, these become pinch points, making it especially difficult for anyone crossing against the flow to get through safely. Pedestrians using mobility devices, strollers, or carrying wheeled bags are especially affected.

Employment at the financial district with commuters headed to and from GO trains and the subway at Union Station, tourists, residents, and fans headed to and from games and concerts at Scotiabank Arena all contribute to the high pedestrian activity in this part of Downtown Toronto.

Since the April 2018 attack, drivers have continued to mount sidewalks and crashing into bus shelters, buildings, and pedestrians. Early this morning, the driver of a stolen Range Rover crashed into a parked car on College Street, entered the sidewalk, hit a guidepost and then a transit shelter, injuring a pedestrian waiting for a streetcar. The driver then fled on foot. Other pedestrians have been injured and killed this year even when they are using signalized crosswalks correctly, and with all due care.

At Bay and Front, despite the huge crowds of pedestrians, traffic signals favour motorists. Left turn signals make pedestrians wait longer at crossings before having to navigate around vehicles illegally blocking the crosswalk in addition to navigating the haphazardly placed Jersey barriers. The video below shows the danger of crossing this intersection.

In his March 25 column in the Toronto Star, Jack “The Fixer” Lakey was not very sympathetic to complaints about the barriers, writing that “they are clearly a pain for people when foot traffic is heaviest, but we couldn’t help but think they would be effective in stopping a driver bent on another deadly attack.”

Lakey then writes that the city is working on permanent barriers that will be “smaller, more aesthetically pleasing and easier to navigate for pedestrians,” with installation this year. It is now almost September, and nothing has been done.

It is hard to argue against barriers in certain places to better protect pedestrians from dangerous motorists. But the Jersey barriers at Union Station are not a sufficient response. Permanent bollard-style barriers would be a definite improvement, and it is disappointing to see the city drag its heels on this.

Meanwhile, the priority afforded to motorists at this downtown intersection, and the lack of enforcement of traffic laws makes it clear that little thought has been afforded to ensuring the safety of all road users. Dropping some road barriers on a sidewalk and calling it a day is unacceptable in a city that is supposedly committed to a Vision Zero action plan.