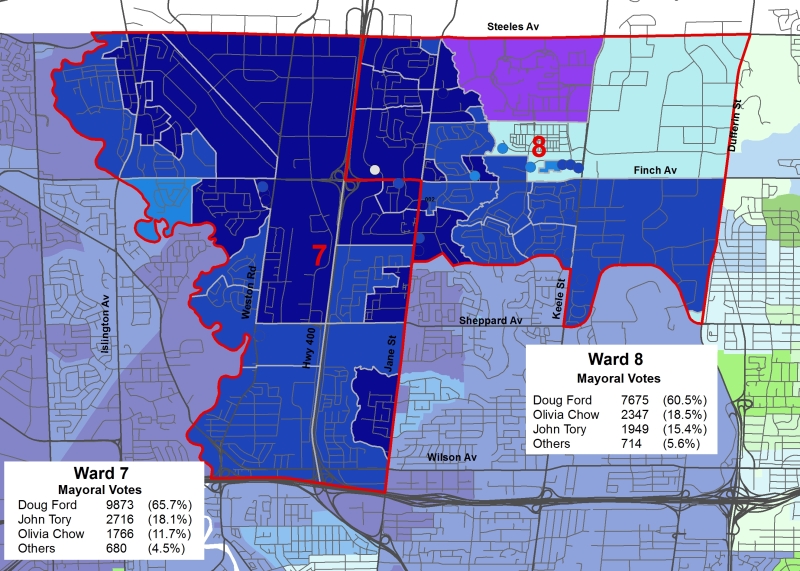 In this post, I take a look at how the good people of Wards 7 and 8 voted in the 2014 Toronto municipal election. Wards 7 and 8, located in North York, straddle the Jane-Finch neighbourhood. Ward 8 extends east to Dufferin Street and includes York University, while Ward 7 extends west to the Humber River.

To say that I am disappointed by these election results, particularly in Ward 7, would be an understatement. Both wards voted overwhelmingly for Doug Ford for mayor. Ward 7 returned Giorgio Mammoliti to office.

Poll results of the mayoral race in Ward 7

In Ward 7, every poll voted for Doug Ford by at least a 20% margin. Ford won 65.7% of all votes cast for mayor, one of his best ward-level results.

At least the results in Ward 8 were a bit more interesting. Along with Ward 17, it was one of only two where the winner, John Tory, came in third place. While over 60% of electors in Ward 8 voted for Doug Ford, two polls thought differently. Poll 007, York University, voted for Olivia Chow; Ford came in third place there. In Poll 021, a small poll located in a senior’s home, Chow and John Tory tied for first. In two more polls, Ford won by narrow margins; Poll 020, the townhouses adjacent to York University (Chow came in second), and Poll 034, new condos built near Downsview Station (where Tory came a close second).

Poll results of the mayoral race in Ward 8

Giorgio Mammoliti, the councillor for Ward 7, has been in municipal politics since 1995. He was a NDP MPP in Bob Rae’s government from 1990 to 1995, after losing his seat, he was elected as a North York city councillor. He has been on Toronto City Council since 1998, and he ran for mayor in 2010 before dropping out in July to run for re-election, and has been most notable for being Toronto City Council’s resident troll and one of Rob Ford’s closest allies.

Among his dubious accomplishments, Mammoliti claimed that Parkdale was a district full of pedophiles, he proposed brothels on the Toronto Islands, promised to “weed out the communists” opposed to Rob Ford’s agenda of service cuts, and proposed to build the world’s largest flagpole to draw tourists to his ward. He opposes transit improvements such as the Finch West LRT, and even had basketball hoops removed because “they seem to attract the wrong crowd outside.” Mammoliti has been in trouble several times for campaign finance violations, including holding an illegal $80,000 fundraiser last year attended by lobbyists, developers and other businesspeople for which he is still under police investigation.

But at least Mammoliti faced some serious competition for city council. The leading challenger in 2014, right-leaning Nick Di Nizio, ran against Mammoliti in the previous election.  In 2010, the year Rob Ford was elected mayor, Di Nizio came in second, with 29.5% of of the vote. Mammoliti won that year with 43.8% of all votes cast. 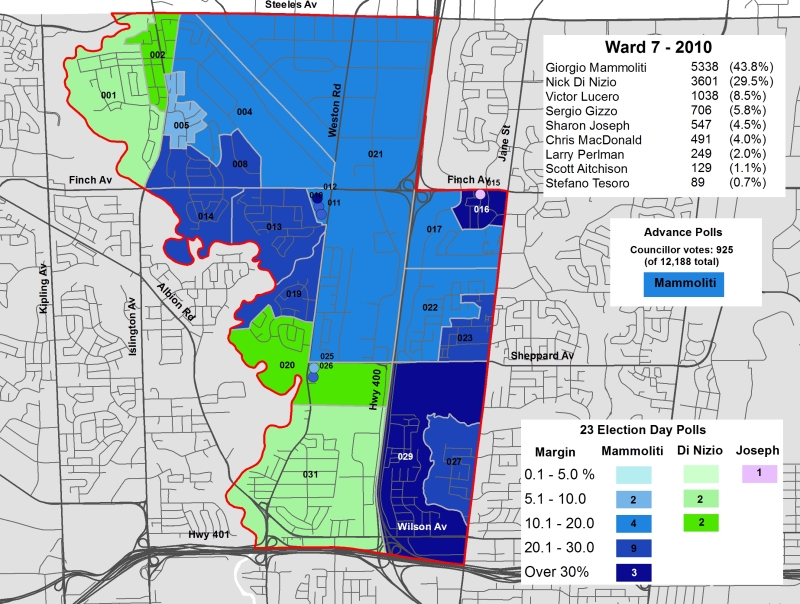 Poll results of the 2010 council race in Ward 7

Unfortunately, the council race results in 2014 turned out almost the same as in 2010; Mammoliti even managed to increase his share of the vote from 43.8% to 46.1%. Di Nizio also did better in 2014, but it wasn’t nearly enough to unseat Mammoliti. Mammoliti polled strongest on the east side of the ward, closest to Jane Street and in high-rise towers near Finch Avenue and Weston Road. Di Nizio did best in areas of high home-ownership to the south and east, closest to the East Humber River, debunking some myths about Mammoliti’s supporter base.

Keegan Henry-Mathieu, a former member of the Toronto Youth Cabinet, was looking to better serve the ward’s residents, focusing on transit, social services and the needs of the ward’s poor and racialized populations. Despite endorsements from alternative media outlets and the Toronto and District Labour Council came in a disappointing sixth place.

Happily, I expect that Henry-Mathieu will continue to work hard for the community and we will be hearing lots about him in the future. On the other hand, it seems that only the judicial system will be able to force Mammoliti from office. 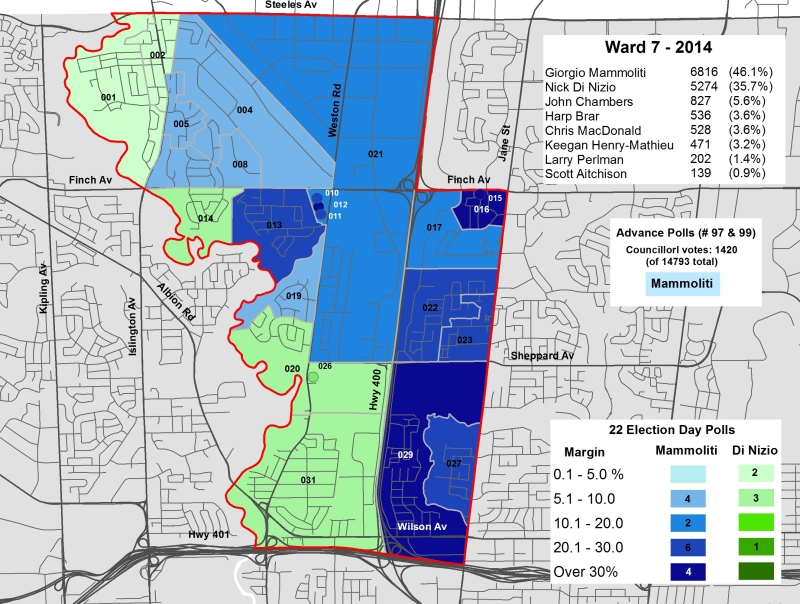 Poll results of the 2014 council race in Ward 7

Anthony Perruzza, re-elected in 2014 with over 70% of the vote, is nominally a member of council’s left-wing, though his voting record is somewhat unpredictable. He defeated right-wing councillor Peter Li Preti in 2006 after running unsuccessfully in Ward 8 in 2000 and 2003. Like his colleague Giorgio Mammoliti, Perruzza was an NDP MPP in Bob Rae’s government; both lost their seats when Mike Harris’ Progressive Conservatives came to power in 1995. But unlike Mammoliti, Perruzza has a socially progressive record on city council.

Since Perruzza won in every poll in Ward 8 by at least a 30% margin over his main challenger, Arthur Smitherman, I did not bother creating a ward level map for the council race there.