In my last post, in which I discussed the gaps in the Golden Horseshoe’s transit network (and offered unsolicited advice to Metrolinx), I used the example of Milton, in which a carpool lot served by several GO Transit bus routes was largely disconnected from the rest of the local transit system, and located several kilometres from the main GO hub at Milton Station.

When I pointed out that Milton Carpool lot, at the junction of Highways 401 and 25, was only served by Milton Transit’s route 1A/1B, which runs only during rush hours, Twitter user YIGE corrected me:

@Sean_YYZ Milton Carpool Lot is served by Trans-cab off-peak & Saturday (regular fare+$0.50). Booking ahead is a pain, but *it's something*

YIGE is correct. Milton Transit does offer a Trans-cab service in the residential areas north of Main Street in Milton, as well as some of the institutional and industrial zones north of Steeles Avenue. I did not see it in the “System Map and Routes” section of the website; it has its own page elsewhere.

Trans-Cabs, are contracted taxi services that are intended to serve suburban or rural areas that would be inefficiently served by fixed bus services, but require a connection to the transit network. Several cities and towns in Ontario offer these services.

In Milton, Trans-Cab operates between 8:30 AM to 2:30 PM, and between 5 PM and 6 PM on weekdays, and from 7:10 AM to 7:40 PM on Saturdays,  times when route 1A/1B does not operate. The service requires a 50-cent premium on top of the Milton Transit fare, and the transfer point isn’t at the GO Station, where all eight fixed route buses connect, but at a point in Downtown Milton where only Route 2 connects. Anyone headed elsewhere must then transfer to Route 2 to the GO Station, and transfer yet again. It’s not at all convenient, and the service ends far too early in the evening, especially for commuters and students headed home from Kitchener-Waterloo or Guelph. And unlike connecting between GO and Milton Transits at the station, there’s no co-fare available to any other GO bus service.

Passengers must also request a ride at least an hour in advance if heading to the transfer point; passengers heading to the Trans-cab service area only have to let the Route 2 operator know they need the service. 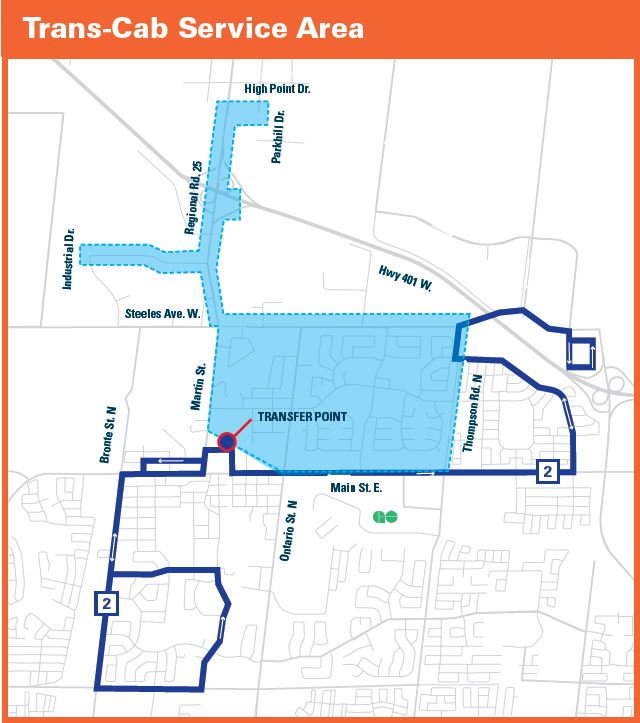 In the Greater Toronto and Hamilton Area, Hamilton Street Railway also provides a Trans-Cab service, serving exurban areas in Stoney Creek (Winona) and Glanbrook. Like Milton, the Trans-Cab service requires a 50 cent premium above the regular fare, and requires a transfer to a regular bus route. In Glanbrook, the service is offered Monday through Saturday from 6 AM to 7 PM, and in rural Stoney Creek from 5AM to 1AM. The HSR system map shows the Trans-Cab service areas. Like Milton, pick-ups have to be arranged at least an hour in advance.

Peterborough and Greater Sudbury also operate Trans-Cabs; again, in those cities, they serve outlying areas that are difficult to serve with fixed bus routes.

The Hamilton example illustrates where Trans-Cabs make more sense: in outlying areas where demand is low, the population density sparse, but there’s a need for transit access. In Milton’s case, operating a fixed route serving the urbanized area north of Main Street makes more sense, especially as it links to a major GO Transit connection;. In Milton, a Trans-Cab might be more useful, say, for serving areas outside the Milton urban area, such as Campbellville and Mohawk Racetrack.

Really, either the Town of Milton/Milton Transit, or GO Transit should work to get the gap between the Highway 401/25 carpool lot and the town transit system fixed properly. An inconvenient Trans-Cab service simply doesn’t cut it.

This entry was posted in Transit and tagged GO Transit, Metrolinx, Milton. Bookmark the permalink.