The upshot of the new, lower UP Express fares 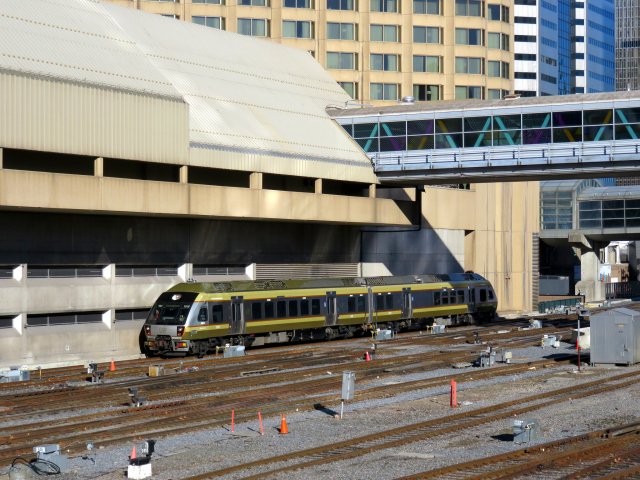 Earlier this month, I commented on the poor ridership numbers of UP Express, Metrolinx’s airport rail link between Toronto’s Pearson International Airport and Union Station. I suggested that despite the embarrassing ridership figures, UP Express (UPX) was no white elephant. I argued that instead, the rail service could be a useful transit link for residents of North Etobicoke, Weston, Mount Dennis, and West Toronto.

Later today, Metrolinx’s Board of Directors is expected to approve a major fare reduction for UPX slashing fares by over 50 percent. The Globe and Mail broke the story yesterday; today the Toronto Star has more details.

The UPX fare between Union Station and Pearson will still be priced at a premium compared to the equivalent GO Transit fare — the cash fare from Union to Malton Station is $7.70, or $6.84 with a Presto card.

Interestingly, before UPX was launched, Metrolinx conducted studies on potential ridership and fares. One study, by Steer Davies Gleave, that some UPX trains might even at capacity by August. You can read Metrolinx’s market research and ridership studies (with some details redacted) here. Obviously, there weren’t enough well-heeled business travellers willing to ride UPX for $27 each, or even enough local residents willing to pay $19 with their Presto card.

This change in pricing makes UPX much more attractive for commuters in the Junction/Junction Triangle neighbourhood, as well as those living in Weston. The lower fares should help increase ridership between Pearson Airport and Union Station as well. It’s a good start, but it isn’t enough.

Last year, I commented on GO Transit’s “fare by distance” structure, which charges disproportionately high fares for short distances, and very inexpensive fares for long commutes.  While GO offers co-fares to suburban transit agencies, it offers no such fare integration with the TTC. GO Transit offers free parking at suburban rail stations, burying the cost of building and maintaining its parking lots into the fares of every passenger, whether they need parking or not.

The charts below show the single ride and Presto fares, per distance travelled in 2016, with the new UPX fares. Per distance travelled, a GO Transit fare to Union Station to Exhibition, Bloor, and Danforth is more expensive than going from Toronto to Pearson Airport via UP Express. 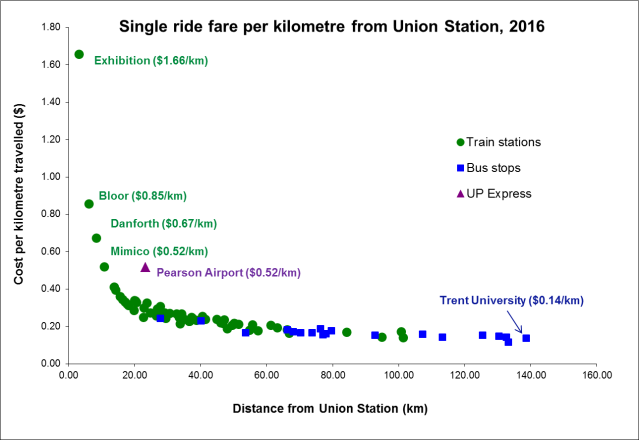 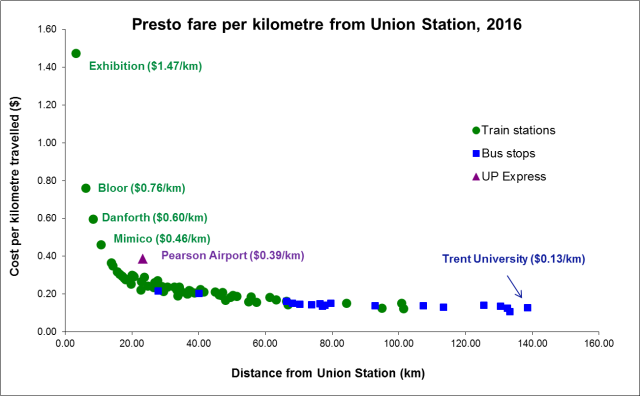 Metrolinx is in the midst of developing a new fare integration strategy, so hopefully these concerns will be addressed. Once the TTC completely rolls out Presto at all subway stations and on all buses, it will be technically simple to adopt a GO-TTC co-fare, and UPX should be part of this as well. There are tens of thousands of jobs at the airport and in the surrounding offices and industrial parks. With proper fare integration with TTC, Miway and Brampton Transit (all of which serve Terminal 1), UPX could become much more useful to many more commuters.

Lowering UP Express fares is a good start, a welcome acknowledgement that the rosy forecasts of business travellers crowding the airport trains were never reached. But lowering fares isn’t enough: with proper fare integration, UP Express can offer far more utility than simply being an airport rail link.

This entry was posted in Toronto, Transit and tagged GO Transit, Metrolinx, TTC, UP Express. Bookmark the permalink.

4 Responses to The upshot of the new, lower UP Express fares