Riding along the McNicoll hydro corridor in northern Scarborough

Earlier this summer, I took two rides from my downtown apartment to suburban locations. On one ride, I biked northeast to Agincourt, on another trip, I biked to Downtown Brampton on a route that took me past the Humber River and Etobicoke Creek. I experienced different standards for on-street and off-road cycling routes. The City of Toronto generally does better, but suburban cycling infrastructure generally depends on off-road trails, rather than on-street bike lanes and cycle tracks.

In the urban, central part of Toronto, bike lanes and cycle tracks (separated bike lanes located along major streets) are the predominant form of cycling infrastructure. While there are some bike lanes in suburban Toronto and in other municipalities like Mississauga and Brampton, most bike routes, if they exist, are off-road multi-use trails, in ravine or hydro corridors, or alongside major roads, like sidewalks.

Multi-use paths are pleasant to ride on, but they’re often treated as recreational trails, rather than transportation corridors. Most paths are not cleared of snow in the winter (winter cycling really should be encouraged), and they are often isolated from the adjacent road network and local destinations, and they can meander, rather than follow straight lines. Road crossings can often be awkward.

Bike lanes, which offer less protection from motorized traffic at least are integrated with the rest of the street grid, and are generally more direct. But on fast-moving suburban arterials, they aren’t ideal without separation. This is where the side-of-road path comes in.

The solution in Mississauga and Brampton is the side-of-road shared pathway, which follow major roadways such as Derry Road and Bovaird Drive. These shared paths act like sidewalks, but are paved with asphalt instead of laid concrete, and are wider. But at every intersection (and even some private driveway crossings), cyclists are expected to stop, dismount, and walk their bikes across intersections built to move cars and trucks quickly, often featuring wide turning radii and channelized right turns.

There are only a few examples of side-of-road shared pathways in Toronto, such as Eglinton Avenue through Etobicoke. But Toronto, unlike Brampton or Mississauga, designates “side-rides” next to crosswalks; there are no signs instructing cyclists to dismount. I suspect that the instructions to dismount are because cyclists are using crosswalks (the domain of pedestrians) and also for liability reasons. “Dismount and walk bike” instructions are ignored by most cyclists whenever signs of this sort are posted.

These types of paths also have the potential for pedestrian-cyclist conflicts, but on suburban roads, where pedestrian traffic is limited, it’s a reasonable idea. They’re safer than painted on-street bike lanes, especially in industrial areas where there are many trucks. But there needs to be much more attention to where they cross intersections; putting up “stop and dismount” signs isn’t a worthy answer.

“Cyclists dismount – walk bicycle across roadway” – Derry Road, Mississauga. Note the wide turning radius in the foreground, and the channelized right turn lane on the other side of the intersection.

Similar crossing of multi-use path at Eglinton and Kipling Avenues in Etobicoke. Cyclists are simply instructed to yield to pedestrians, and use the pink-tinted “cross-ride” next to the crosswalk.

Ravine trails and side-of-road multi-use paths make Brampton look quite bicycle-friendly on Google Maps, as shown below in a screengrab. But Highway 410 remains a barrier to safe east-west travel, and the safety of some of those side-of-road paths is poor at busy intersections. Connections are lacking, especially in the older parts of the city. Ravine paths are not cleared of snow in the winter, as Brampton (and other municipalities) designated potentially useful cycling routes as ‘recreational trails.’

Another problem is the lack of curb cuts. Routes that are designated for cycling on city maps and on Google do not feature curb cuts where they cross roadways, another barrier not only to cyclists, but pedestrians using wheeled mobility devices or strollers.Cyclists must jump the curb, ride on the sidewalk, or dismount and remount at each curb. Below is the intersection of one pathway in Bramalea, which provides an otherwise useful off-road route between schools, residential subdivisions, and shopping centres. Also note the lack of a crosswalk at this four lane road.

In Toronto, at least, newer multi-use paths meet every road with a marked crossing, and on routes such as the Gatineau Hydro Corridor, there are pedestrian and bicycle signals, with cross-traffic controlled by traffic lights. 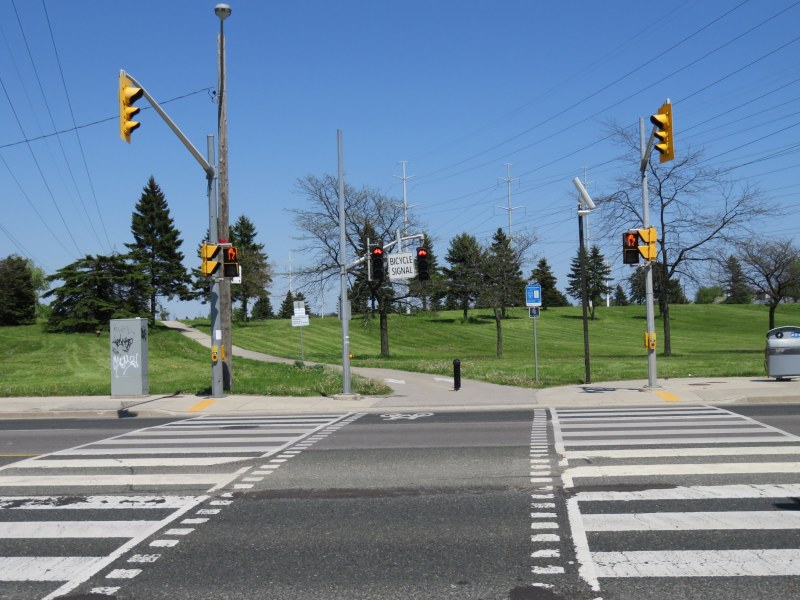 Brampton has a few bike lanes, such as on Birchbank Drive in Bramalea and Rutherford Road in central Brampton. But these aren’t due to high cycling demand, but are really traffic calming techniques: a four lane road is narrowed to two traffic lanes, with permanent parking and bike lanes painted in. The bike lanes on Rutherford don’t even connect to any other cycling infrastructure in Brampton. 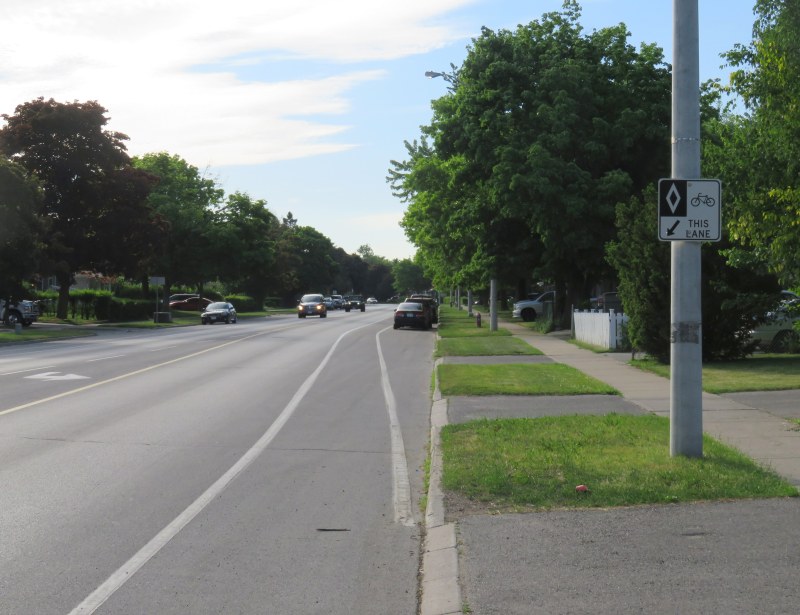 In Toronto, bike lanes in the suburbs are also rare, and don’t usually connect to other cycling routes. In Scarborough, two suburban road that had bike lanes — Pharmacy Avenue and Birchmount Avenue — had their lanes removed. A pity, as these roads could be used to connect the Gatineau corridor with other cycling routes like the Taylor Creek trail. 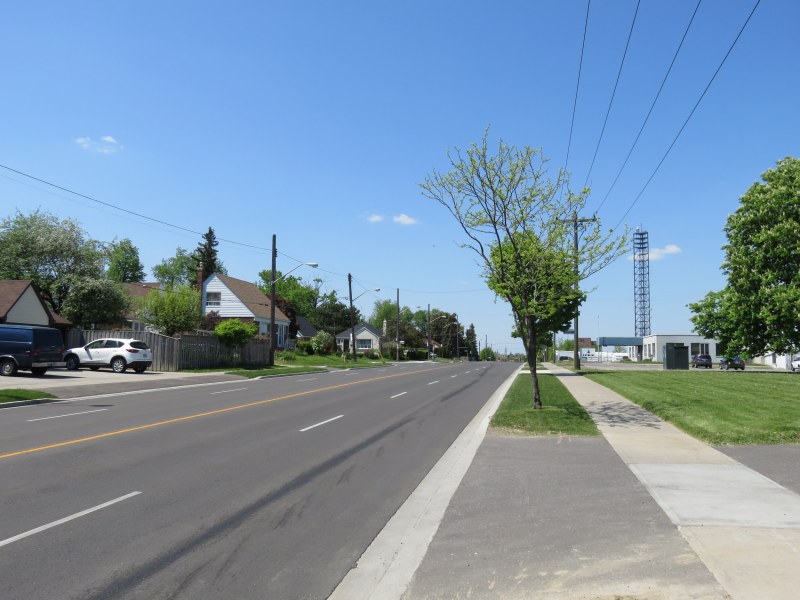 Pharmacy Avenue, a minor arterial where bike lanes were removed. Lanes here could connect the Gatineau Hydro Corridor to the Taylor Creek Ravine.

Suburban municipalities should be more welcoming of cyclists. It’s a environmentally friendly, low-cost, and flexible mode of transportation that anyone can learn. Brampton has a very good pathway master plan, developed in 2002, but many of its recommendations — such as curb cuts — were never implemented and many connections remain unrealized.

Side-of-road multi-use paths are an inexpensive way of providing separated cycling infrastructure, but intersections need to be made safer for pedestrians and cyclists crossing. This means wide crosswalks and “cross-rides,” eliminating channelized turn lanes that serve only to allow motorists to speed through intersections, and providing curb cuts and safer crossings where multi-use paths cross suburban roadways. Until then, pouring asphalt and calling it cycling infrastructure simply isn’t good enough.

2 replies on “Suburban cycling infrastructure: the 416 versus the 905”

Interesting blog post. I live in Oakville and there are no curb cuts along our bike trails. I only know of one; for some reason a traffic island was installed last year right where the trail and the street intersect and they cut the curbs while they were at it. Even the traffic island itself is cut along the crossing. Those bike crossings you see in Toronto are pretty cool too. So far I’ve only seen one of those on Third Line and Dundas in Oakville (right by the new hospital) and the traffic light for the bike traffic is installed to but not yet in operation for some reason.

Marshall’s observations are important information for someone like myself, as I love to do distance virtually uninterrupted by road crossings. Rail trails are almost invariably wonderful for that. You know you can access them, and do a good hour or more of not having to consult endless maps, and compromise your continuity after finding out what’s on the map, and what’s reality are two very different things.

Disjointed fragments of ‘cycle paths’ usually equal a ‘disjointed experience’…and a disincentive to exploring regions where the likelihood is that you’re going to be stuck in the middle of suburbia with no way out save the way you came, or along dangerous and confusing arterial roads, which is exactly what you wanted to avoid in the first place. Every time I access the ‘headwaters’ of the Humber West Trail at Claireville Reservoir, I’m tempted to explore to the northwest, but I know I’ll have a guaranteed uninterrupted ride (Hwy 401 bridge reconstruction besides) to the rest of Toronto’s extensive cycling trails by following the Humber downstream. The Humber West Trail may not be the most direct way to the Toronto waterfront, but temporary 401 bridge work besides, it’s a very good route to get there. Toronto’s valleys have some incredibly good trails that actually lend themselves to getting across town. Only a few, however, connect you to ‘escape routes’.