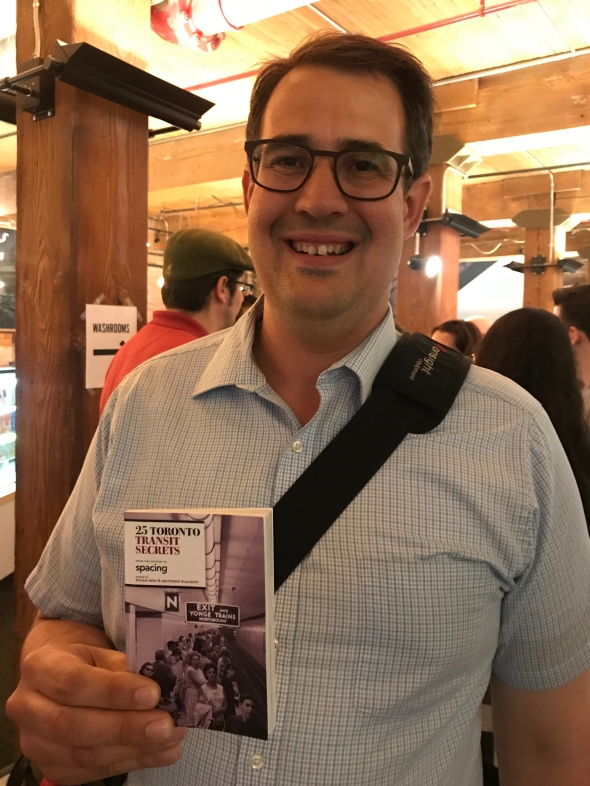 Earlier this week, I attended a book launch at the Spacing Store at 401 Richmond Street West here in Toronto. While I have been to numerous book launches, often to support friends and colleagues, it was the first time it was for a book that I contributed to.

As some of you may know, I am an occasional contributor to Spacing Magazine and Spacing’s website. My writing has allowed me to think and learn more about Toronto, and meet fellow engaged Torontonians. Spacing’s latest book, 25 Toronto Transit Secrets, contains stories, photographs, and maps that detail both the history and the operations of the TTC. For my part, I wrote about the ghostly reminders of abandoned streetcar routes, the history of the convoluted Harbord Streetcar, and what happens to the TTC’s streetcars when they’ve reached the end of the line.

There are many other great stories as well. Read about the TTC’s safety mascot, Barney the Beaver, Toronto’s two ghost stations (Lower Bay and the lesser-known Lower Queen) and a history of the ferry service to Toronto Islands.

25 Toronto Transit Secrets is edited by Dylan Reid and Matthew Blackett, who both deserve a lot of credit. Any writer knows that their work is dependent on editors not only proof-reading their work, but also providing guidance and support. I am always grateful for their encouragement and providing the opportunity to be published.