Where, exactly, is Northern Ontario? 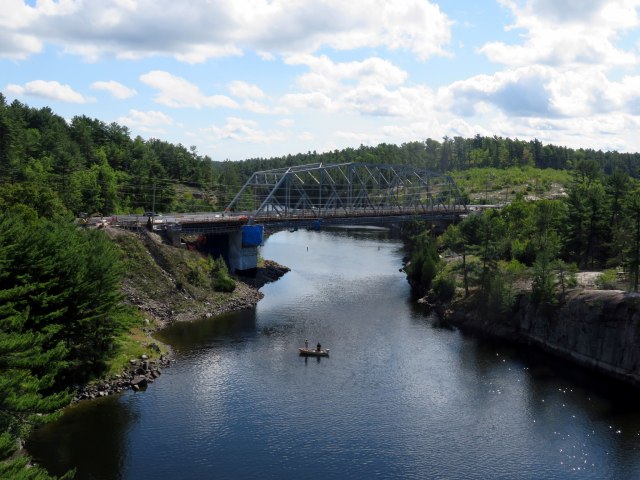 The French River at Highway 69, where Northern Ontario truly begins

Last week, the leaders of the three major provincial parties (Liberals, Progressive Conservatives, and the New Democrats) met in Parry Sound, at a debate dedicated to issues specific to Northern Ontario. It was the second of three debates scheduled ahead of the June 7, 2018 general election.

But is Parry Sound, a town that’s only a two hour’s drive north of Toronto (when free of weekend Cottage Country traffic) really a part of Northern Ontario? That depends on who you ask. Even government agencies disagree. In my opinion, though, Parry Sound isn’t in Northern Ontario, even though the district it’s located in shares some characteristics of this vast part of the province.

Despite living my entire life in the Greater Toronto Area, I have an affinity for Northern Ontario, particularly the northeastern part of the province. My father’s hometown is Timmins, one of my siblings lives in Sudbury, and I have visited both cities many times. I made a trip up to Sault Ste. Marie to ride the Algoma Central Railway passenger train between Sault Ste. Marie and Hearst and back before it was cancelled, and I still lament the loss of the Northlander, Ontario Northland Railway’s passenger train between Toronto and Cochrane that was terminated in 2012. I even made it all the way to Moosonee, on the James Bay coast.

The northern part of this province covers a huge area — over 800,000 square kilometres, larger than France, Belgium, and the Netherlands combined — but has a population of just over 750,000. It is even crossed by a time zone boundary. Despite my connection to the region, I still have to yet to make a proper visit to Thunder Bay and Northwestern Ontario.

The North includes many First Nations communities accessible only by plane or ice road. Other communities, with names like Dryden, Kapuskasing, Iroquois Falls, and Kirkland Lake, were established to serve mines or pulp mills — resulting in a very different economic landscape than the agricultural and industrial south. In recent decades, many of those mines and mills have closed, eliminating many towns’ only major employer.

In a province dominated by the urban centres in the Greater Golden Horseshoe, Ottawa, and London, it’s too easy to ignore the North.

So how do people actually define Northern Ontario?

Traditionally, Northern Ontario begins at the French River, Lake Nipissing, and at the Mattawa River. North Bay, which calls itself the “Gateway to the North” sits right on this line. For administrative purposes, this includes the entirety of Sudbury and Nipissing Districts, which extend south of the French and Mattawa Rivers, and includes most of Algonquin Park. It also includes Manitoulin Island, which can only be reached year-round from the north, through Sudbury District.

The Canadian Shield, the defining landscape of most of Northern Ontario, starts further south. Driving north from Toronto on Highways 400 or 11, the shield starts about where Simcoe County ends and Muskoka District starts. But the Canadian Shield also encompasses large sections of the City of Kawartha Lakes and Peterborough, Hastings, Frontenac, and Lanark Counties and the entirety of Haliburton County.

The various definitions of Northern Ontario, including the county, regional and district boundaries.

Whether Parry Sound and Muskoka are considered part of Northern Ontario is very much a political question. In 2004, the newly elected Liberal government chose to remove Muskoka from the areas eligible for provincial grants meant for northern communities — Muskoka being a reliable Progressive Conservative seat, and the riding of the previous PC premier, Ernie Eves.

Parry Sound District, while not, in my view, part of Northern Ontario, at least shares some similar characteristics with neighbouring Sudbury and Nipissing Districts. It includes many isolated communities, and apart from the Town of Parry Sound itself, it has a very sparse population. Muskoka, on the other hand, is more urbanized with three larger towns, and is much more popular for recreation, particularly during the summer. Muskoka also has a regional government — the District Municipality — while much of Parry Sound District’s land is unorganized — meaning lands without any municipal government.

And if one considers Muskoka to be part of Northern Ontario, why not also include Haliburton County, which also has a sparse population and is relatively isolated from the urbanized south? A line needs to be drawn somewhere, and there is no valid reason why Muskoka should ever be considered a part of Northern Ontario. There might be a case for Parry Sound District, but definitely not cottage country.

This entry was posted in Ontario, Politics and tagged boundaries, Northern Ontario, Ontario. Bookmark the permalink.

5 Responses to Where, exactly, is Northern Ontario?