In this post, I examine the results in three west-end wards – Wards 13 and 14, Parkdale-High Park, and Ward 18 Davenport. (I previously mapped and commented on Ward 17 Davenport.)

Ward 13, includes part of the Junction as well as the relatively affluent Baby Point, Swansea, and Bloor West Village neighbourhoods. John Tory won this ward by a comfortable margin. Wards 14 and 18 selected Olivia Chow. Doug Ford came in a very distant third place, winning only a few polls. With a few exceptions, the polls east of Parkside/Keele voted for Chow; west of there, mainly for Tory.

All three incumbent councillors were re-elected: Sarah Doucette in Ward 13, Gord Perks in Ward 14, and Ana Bailão in Ward 18. Of the three council races, only Ward 18 was competitive. New challenger Alex Mazer ran against Bailão and lost by only 800 votes. 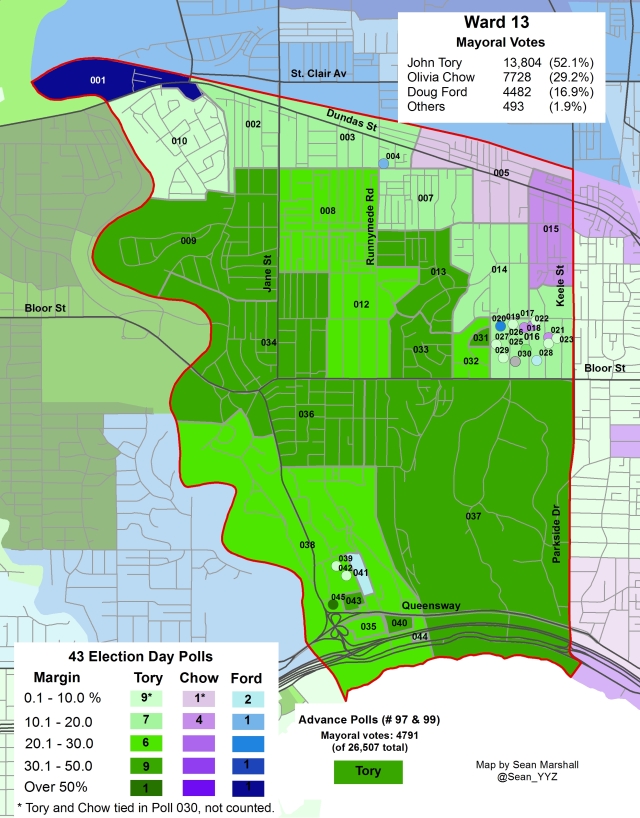 Poll results of the mayoral race in Ward 13

Tory won most polls in Ward 13, doing especially well in Baby Point and parts of Swansea and High Park. Olivia Chow won two polls closest to the Keele/Dundas intersection, the heart of the gentrifying Toronto Junction neighbourhood. The high-rise apartment cluster near Keele and Bloor was mixed; Tory, Chow and Ford won a few polls. Doug Ford won two TCHC polls: 001 (where he got 71% of the vote) and Poll 020, as well as a poll containing two older condo towers in Swansea (Poll 041) and a private rental in High Park (Poll 028).

First-term incumbent Sarah Doucette was re-elected with 65.6% of the vote in Ward 13; she also won every poll by at least a 25% margin. Second place candidate Nick Pavlov took only 10.6% of the vote.

Poll results of the mayoral race in Ward 14

Olivia Chow won most polls in Ward 14; John Tory came in first place (by a small margin) in polls closest to High Park in Roncesvalles Village, and in the “West Bend” neighbourhood northwest of the Bloor/Dundas intersection. The only polls Doug Ford won were seniors’ residences, nursing homes, and one TCHC property in Parkdale.

Veteran councillor Gord Perks easily held onto Ward 14 with 55% of the vote, though challenger Charmain Emerson, also running on a progressive platform, did quite well; she earned 32.2% of the vote. Perks won all but one poll, however, tying with Emerson in Poll 033.

Poll results of the councillor race in Ward 14

Olivia Chow won all but three of the 27 election-day polls in Ward 18. Tory came first in poll encompassing two condominium towers near Queen and Gladstone, while Ford was the first choice in two seniors’ homes.

Poll results of the mayoral race in Ward 18

The council race in Ward 18 was one of several to watch in the last election, and became a two-horse race. First-term incumbent Ana Bailão was an effective centrist on city council and a good community councillor. She played a pivotal role in council’s decision not to contract out cleaning services at city properties, a blow to Mayor Rob Ford’s agenda.  But she also pleaded guilty to an impaired driving charge after drinking with casino lobbyists. Alex Mazer, a lawyer, businessman, and policy advisor, ran on Bailão’s left; he was endorsed by the Toronto Star and NOW magazine.

But like most incumbents seeking re-election, Bailão was returned to council, but it was a close race. Just over 800 votes separated the two leading candidates. There’s no clear geographic pattern to how each poll voted, except that Mazer did the best in the Dufferin Grove neighbourhood and the new condominiums south of Queen Street. Bailão is an immigrant from Portugal, which likely helped in a ward with a large Portuguese-Canadian and Brazilian-Canadian community.

Personally, I would have preferred Alex Mazer to win in Ward 18, but Ana Bailão has proven herself to be a fairly good city councillor. I wish her the best in her second term.

Poll results of the councillor race in Ward 18