In this post, I examine the results in four downtown wards – Wards 19 and 20, Trinity-Spadina, and Wards 27 and 28, Toronto Centre-Rosedale.

Olivia Chow, the early favourite to defeat Rob Ford, was a long-time city councillor. Chow represented Ward 20 before she ran and won in Trinity-Spadina for the New Democratic Party in the 2006 federal election. In order to run for mayor, Chow resigned as an MP early in 2014. A by-election was called for June 30. Joe Cressy hoped to keep the seat for the NDP, but Adam Vaughan, Chow’s successor as Ward 20 councillor, won the by-election for the Liberals by a wide margin. In the provincial election held earlier that month, Rosario Marchese, one of a very few NDP MPPs left from the Bob Rae era, lost to Liberal candidate Han Dong. Trinity-Spadina’s demographics were changing, especially with new condominium towers going up in new neighbourhoods like City Place and Liberty Village. And this mattered in the 2014 municipal election.

Of the four downtown wards, John Tory came in first place in three: Wards 20, 27, and 28. Olivia Chow did not win her own ward, even though she represented it in municipal and federal politics for decades. Interestingly, John Tory is also a Ward 20 resident, so he, like Doug Ford, won his own ward. Tory makes his home in a large condominium apartment in Poll 013, Chow lives in a house in Poll 024. At least Chow won her poll.

The map at the top of this article illustrates each poll’s first choice for mayor, without gradients based on the margin of the win. What can clearly be seen is that the older, more established neighbourhoods (with the exception of Rosedale and Yorkville) voted for Chow. The new condominium neighbourhoods voted for Tory. Doug Ford won a few polls – Moss Park and several other TCHC housing properties, but managed only to get 12.6% of the vote in these four wards.

But what really strikes me is the north-south divide. Queen Street is a clear dividing line between the new condos to the south (Liberty Village, Fort York, City Place, Entertainment District, the Waterfront and Financial Districts) and the older neighbourhoods to the north. Other areas with many new condo towers, such as around Yonge/Church/Bloor and along Bay Street, also picked Tory. 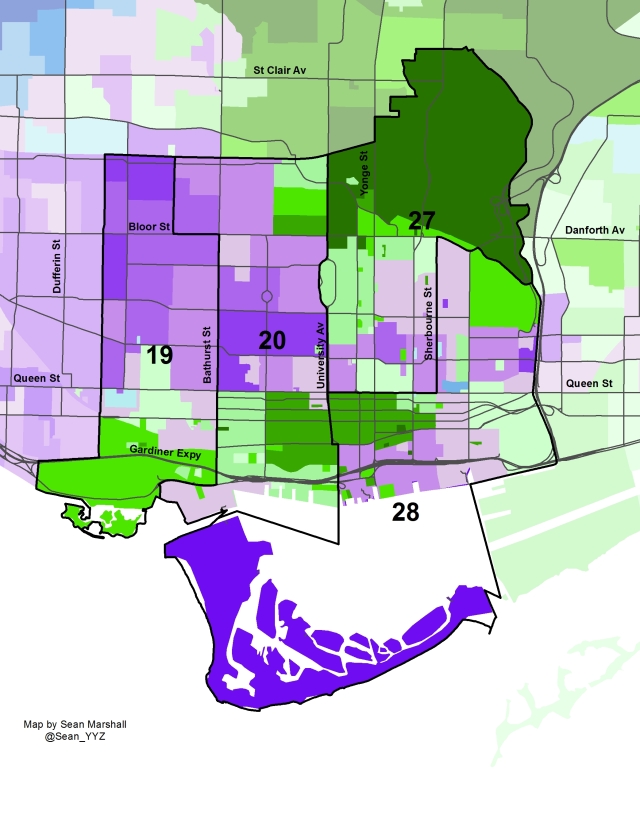 What really surprised me was that Tory came in first in the Church-Wellesley neighbourhood. Olivia Chow and her late husband Jack Layton were some of the greatest allies of the Toronto’s LGBT community, going back to the 1980s, when gays and lesbians did not enjoy the societal acceptance and support that they increasingly do now. I suspect that the spectre of a Doug Ford victory (the Fords have been rightly accused of being homophobic) convinced many voters to back Tory as Chow’s campaign floundered, and this might have been an important factor here.

Except in Ward 20, where Councillor Adam Vaughan moved on to federal politics (Ceta Ramkhalawansingh filled in as a interim council appointee), each incumbent councillor – Mike Layton in Ward 19, Kristyn Wong-Tam in Ward 27, and Pam McConnell in Ward 28, were easily re-elected.

In Ward 20, Joe Cressy, after losing the federal by-election, ran for council in a crowded, open race, and won 42% of the vote and 54 of 68 election-day polls. There were other very good candidates, like Terri Chu (who came in second with 12.4%), Albert Koehl, and Anshul Kapoor, but Cressy had the organization and some name recognition from his run for MP. Cressy also had the endorsement of NOW, the Toronto Star, and the Labour Council. Fringe mayoral candidate Sarah Thomson also ran in Ward 20 after withdrawing from the mayoral race, despite her name recognition and nearly winning Trinity-Spadina for the Provincial Liberals in 2011, came in third with 9.5% of the vote.

First-term incumbent Mike Layton won every poll in Ward 19 by a large margin, so I didn’t create a map of the council race there. Layton won with 83.7% of the vote, second place Scott Bowman took 9.9% of the vote. Also running were Albina Burello and George Sawision, who got 3.8% and 2.6% of the vote, respectively.

Poll results of the mayoral race in Ward 19

I described the result of the council race earlier in this post, but it is interesting to see the poll results. Eight candidates won at least one poll in Ward 20.

Poll results of the mayoral race in Ward 20

Poll results of the councillor race in Ward 20

In Ward 27, first-term incumbent councillor Kristyn Wong-Tam (and one of my favourite councillors) won every poll. Her nearest competitor was Megan McIver, who only won 17% of the vote. Interestingly, Wong-Tam had the least support in Rosedale, narrowly winning Poll 009, which contains Chorley Park, where a NIMBY backlash against a public trail construction project probably factored into that result. Also interesting is seeing the split in the vote for Tory and Chow in the Church-Wellesley area. Neither Tory nor Chow won any of those polls, by a large margin; in one poll, both candidates tied. Needless to say, Ford came in a very distant third.

Poll results of the mayoral race in Ward 27

Poll results of the councillor race in Ward 27

Incumbent Pam McConnell won with 55.8% of the vote and every poll but one: Poll 062, the new high-market “Pier 27” condominium development at the foot of Yonge Street. The winner of that poll was fourth-place challenger Andy Melnyk.

Poll results of the mayoral race in Ward 28 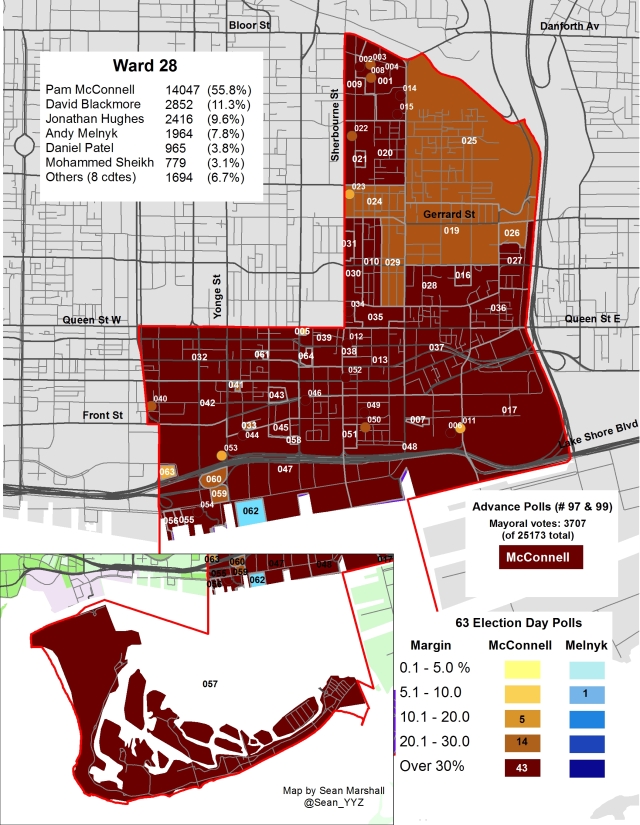 Poll results of the councillor race in Ward 28