In 2014, Scarborough elected ten city councillors. Since that election, one councillor, Ron Moeser, died in office, while two others, Raymond Cho and Chin Lee, resigned to run for provincial office. Cho, representing the Ontario PCs, was successful, while Lee, running for the Liberals, was not. Neethan Shan was elected in Ward 42 in a by-election to fill Cho’s seat. Jim Hart was appointed in Ward 44 by council after Moeser’s death, and Miganoush Megardichian was appointed in Ward 41.

With the new 47 ward model approved by city council for the 2018 election, Scarborough was allocated the same number of wards, though boundaries shifted to reflect changes in population. Two of the new wards – 44 and 47 – had no incumbent running, opening those wards up to new voices.

With Premier Doug Ford’s move to cut city council to just 25 wards, Scarborough went down to just six wards. In Wards 20 and 22, incumbents faced off against each other. Councillor Glenn De Baeremaeker, famous for his support of the Scarborough subway extension, decided that the odds were against him and withdrew his candidacy. De Baeremaeker’s old ward was cut in half and redistributed evenly to new Wards 21 and 24. Had he decided to run again, it would have meant running against fellow council veterans Michael Thompson or Paul Ainslie, both of whom had a geographic advantage in not losing any of their former territories.

Of the remaining three races in Scarborough, only Ward 20 was interesting. There, incumbents Michelle Holland-Berardinetti and Gary Crawford ran against eight challengers. In Wards 21 and 24, Councillors Thompson and Ainslie won with over 65 percent of the vote and nearly every poll. I did not map the results of those two races.

Crawford was first elected in Ward 36 in 2010 after serving as public school trustee. He previously ran for the provincial Progressive Conservatives in 2007. Ward 36, whose southern boundary was Lake Ontario, was Scarborough’s most affluent ward and included the Scarborough Bluffs. Holland-Berardinetti, the spouse of former Liberal MPP Lorenzo Berardinetti, was also first elected in 2010, representing Ward 35. Both councillors were re-elected by wide margins in 2014.

Bill 5 resulted in Wards 35 and 36 merging, with only a small part of old Ward 36 shifting to new Ward 24. The number of voters in each of the two former wards was almost equal, but Crawford won a very a tight race; only 411 votes separated the two incumbents.

Though Mohsin Bhuiyan originally registered to run against Crawford in the 47-ward model, he placed first in five polls in former Ward 35, in the Dentonia Park and Scarborough Junction neighbourhoods. He placed third overall, with 10 percent of the vote, but he drew more votes from Holland-Berardinetti than from Crawford. Suman Roy, a food advocate endorsed by the Toronto Star and NOW Magazine, was only able to get 5.4 percent of the vote, coming in fifth. 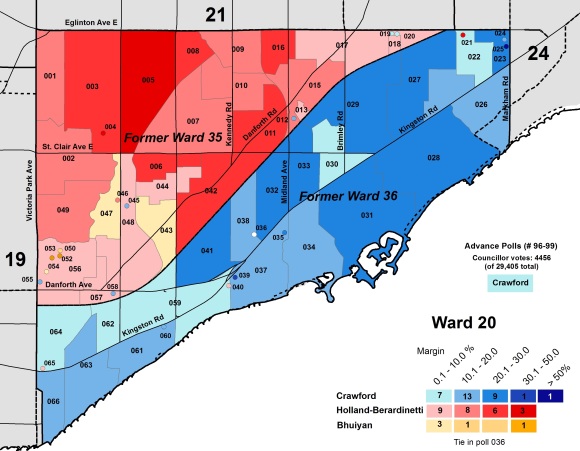 Michael Thompson was first elected to Toronto City Council in 2003. In the 2014 election, he won with over 80 percent of the vote. In the larger new ward, the share of the vote fell to 69 percent. While he’s a thoughtful conservative and a good constituency councillor, Thompson also supported Doug Ford’s unilateral cut to city council.

Paul Ainslie was first elected to Toronto City Council in 2006, after being appointed to council in a neighbouring ward in 2005. A principled centrist, Ainslie served on Tory’s executive committee and was re-appointed in 2018. Ainslie won in 2018 with two-thirds of the vote in Ward 24, placing first in all but three polls.

The Gardiner Expressway isn’t so much a barrier to the waterfront because it’s a looming, elevated eyesore: the railway viaduct isn’t pretty to look at either. It’s a barrier to the waterfront because the roadways around the Gardiner: the on ramps, dual left turn lanes, channelized right turns, and the ground-level Lake Shore Boulevard below it, are hostile to pedestrians. Pedestrians are expected to  yield to cars and trucks at many points; there are many missing crosswalks, and where pedestrians can cross, they must wait for long waits to do so as traffic light cycles prioritize through vehicles.

In the 1950s, when the Gardiner was planned, the waterfront was a mess of railway spur lines, warehouses, and grain silos. Downtown was several blocks north, on the other side of passenger rail yards and Union Station. So it was not the type of place — nor the era — where creating pedrestrian-friendly enviroments was deemed important.  But since then, the rail yards were redeveloped, the waterfront got new parks, cultural spaces, residents, and shops. The Gardiner Expressway hasn’t kept up.

It took me 8 minutes, 30 seconds to cross this intersection legally. And I'm an able-bodied younger adult. #walkTO pic.twitter.com/WfJ8txXb6t

At Spadina and Lake Shore, it took me 8 1/2 minutes to legally cross at Spadina and Lake Shore (and I’m a healthy, younger, able-bodied adult without parcels or a rolling a stroller). As pedestrians are banned from crossing east-west on the north side of the intersection, and north-south on the west side, I had to return to the corner of Spadina and Bremner/Fort York and walk on the other side. And even that was an unnecessary ordeal.

The local councillor, Joe Cressy (Ward 20) is on it, and is working on solutions for next year. The Bentway Park will be a good addition as well (even if I haven’t warmed to the name.) But it’s a shame that as a city has grown around this area, the Gardiner remains so difficult to get around on foot.

Read more in my latest article in Torontoist. 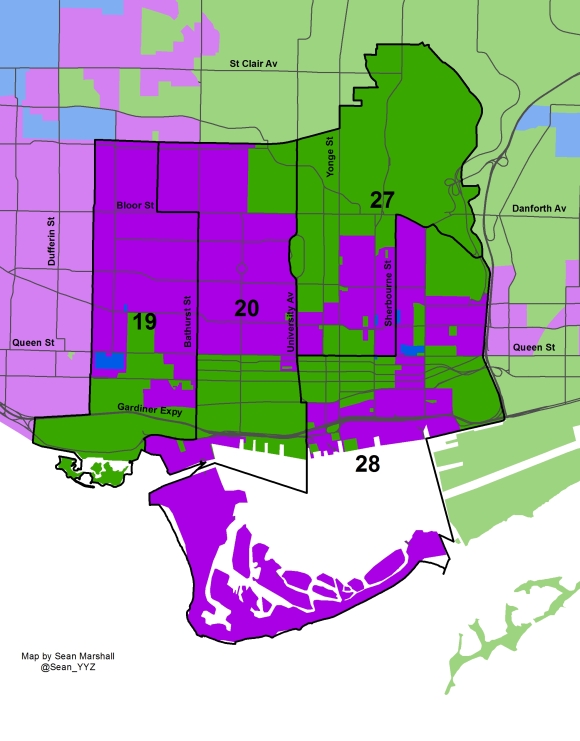 In this post, I examine the results in four downtown wards – Wards 19 and 20, Trinity-Spadina, and Wards 27 and 28, Toronto Centre-Rosedale.

Olivia Chow, the early favourite to defeat Rob Ford, was a long-time city councillor. Chow represented Ward 20 before she ran and won in Trinity-Spadina for the New Democratic Party in the 2006 federal election. In order to run for mayor, Chow resigned as an MP early in 2014. A by-election was called for June 30. Joe Cressy hoped to keep the seat for the NDP, but Adam Vaughan, Chow’s successor as Ward 20 councillor, won the by-election for the Liberals by a wide margin. In the provincial election held earlier that month, Rosario Marchese, one of a very few NDP MPPs left from the Bob Rae era, lost to Liberal candidate Han Dong. Trinity-Spadina’s demographics were changing, especially with new condominium towers going up in new neighbourhoods like City Place and Liberty Village. And this mattered in the 2014 municipal election.

Of the four downtown wards, John Tory came in first place in three: Wards 20, 27, and 28. Olivia Chow did not win her own ward, even though she represented it in municipal and federal politics for decades. Interestingly, John Tory is also a Ward 20 resident, so he, like Doug Ford, won his own ward. Tory makes his home in a large condominium apartment in Poll 013, Chow lives in a house in Poll 024. At least Chow won her poll.

The map at the top of this article illustrates each poll’s first choice for mayor, without gradients based on the margin of the win. What can clearly be seen is that the older, more established neighbourhoods (with the exception of Rosedale and Yorkville) voted for Chow. The new condominium neighbourhoods voted for Tory. Doug Ford won a few polls – Moss Park and several other TCHC housing properties, but managed only to get 12.6% of the vote in these four wards.

But what really strikes me is the north-south divide. Queen Street is a clear dividing line between the new condos to the south (Liberty Village, Fort York, City Place, Entertainment District, the Waterfront and Financial Districts) and the older neighbourhoods to the north. Other areas with many new condo towers, such as around Yonge/Church/Bloor and along Bay Street, also picked Tory.

What really surprised me was that Tory came in first in the Church-Wellesley neighbourhood. Olivia Chow and her late husband Jack Layton were some of the greatest allies of the Toronto’s LGBT community, going back to the 1980s, when gays and lesbians did not enjoy the societal acceptance and support that they increasingly do now. I suspect that the spectre of a Doug Ford victory (the Fords have been rightly accused of being homophobic) convinced many voters to back Tory as Chow’s campaign floundered, and this might have been an important factor here.

Except in Ward 20, where Councillor Adam Vaughan moved on to federal politics (Ceta Ramkhalawansingh filled in as a interim council appointee), each incumbent councillor – Mike Layton in Ward 19, Kristyn Wong-Tam in Ward 27, and Pam McConnell in Ward 28, were easily re-elected.

In Ward 20, Joe Cressy, after losing the federal by-election, ran for council in a crowded, open race, and won 42% of the vote and 54 of 68 election-day polls. There were other very good candidates, like Terri Chu (who came in second with 12.4%), Albert Koehl, and Anshul Kapoor, but Cressy had the organization and some name recognition from his run for MP. Cressy also had the endorsement of NOW, the Toronto Star, and the Labour Council. Fringe mayoral candidate Sarah Thomson also ran in Ward 20 after withdrawing from the mayoral race, despite her name recognition and nearly winning Trinity-Spadina for the Provincial Liberals in 2011, came in third with 9.5% of the vote.