Does Scarborough need a subway extension? (No, it doesn’t.)

The Scarborough Rapid Transit (SRT) line, opened in 1985, is in dire need of replacement. The SRT was planned as a grade-separated LRT route (here what it would have looked like), but the province pushed a new automated light metro ICTS technology. ICTS was developed by the Urban Transportation Development Corporation, then owned by the provincial government (UTDC’s technologies are now owned by Bombardier). ICTS has proven to be successful elsewhere, particularly for Vancouver’s SkyTrain, but not so much in Toronto.

The city and province originally agreed to replace the ageing SRT with an extended LRT line, which would have been fully grade-separated. It would provide a rapid, high-quality transit route similar to LRT networks in Calgary or San Diego. Repairs to the existing line and new ICTS rail cars would have been expensive and difficult. For example, a tight tunnel between Ellesmere and Midland Stations would require complete reconstruction to fit the larger cars Bombardier still produces for Vancouver.

In 2010 Rob Ford got elected on a promise of building “subways, subways, subways,” and with the province, had the fully funded, shovel-ready LRT conversion and expansion put on hold. Queen’s Park was wary of Ford’s support in those early years, and the Liberal government afraid of losing seats in Scarborough to the Conservatives. Interestingly, left-leaning councillor Glenn De Baeremaeker was one of the most vocal champions of the subway.

The alignment for the Bloor-Danforth subway extension from Kennedy Station, which has not yet been decided, would probably be routed via Eglinton Avenue, Danforth Road, and McCowan Road, with stops at McCowan and Lawrence, McCowan and Ellesmere (or closer to the Scarborough Town Centre Mall) alignment to Sheppard Avenue, and McCowan and Sheppard.

Council had the opportunity in 2013 to reverse its stance, but it unfortunately voted 26-18 to pursue the subway. Paul Ainslie (my favourite councillor in Scarborough), voted for the LRT, the only councillor from that part of Toronto to do so. In return, Mayor Rob Ford robo-called Ward 43 residents, falsely accusing the Ainslie of not consulting with his constituents when he decided to back the LRT. Ford was later forced to apologize by order of the integrity commissioner.

Ainslie has it right. Support for the subway extension, even in Scarborough, isn’t as strong as many of its politicians’ rhetoric makes it sound. Some polls even suggest that residents in Scarborough support LRT. Mayoral candidates David Soknacki (who dropped out in September) and Olivia Chow supported going back to the LRT plans, but Doug Ford and John Tory backed the subway.

So here we are. John Tory, elected mayor of Toronto, promised to continue with plans to build the Scarborough subway extension, despite its higher cost and his commitment to SmartTrack. On the campaign trail, Tory has not come out fully supporting LRT construction on Finch West or Sheppard East, two of the three pieces of the Transit City plan that are still funded. (The Eglinton-Crosstown LRT, the only Transit City route so far underway, is being built by the province through Metrolinx.)

Today, we learn that Councillor Glenn De Baeremaeker wants a fourth station along the subway extension (near Eglinton and Danforth Road), saying that “it’s no use having a subway if no one one can get access to it.” Ironically, earlier, funded plans for transit in Scarborough would have provided access to rail transit to many more people than a three (or four) stop subway extension.

Of course, these rail transit maps ignore the surface transit (bus) system, which actually delivers the most riders to the TTC’s subway. But to keep things simple, here are a few maps that illustrate what the plans are for Scarborough, and what could have been.

The current plans for rail transit in Scarborough

The above map is what the plans are for Scarborough at this point in time. I mapped the Bloor-Danforth subway extension based on the most likely alignment via Eglinton and McCowan. I also included the route of John Tory’s SmartTrack plan. The fate of the Sheppard East LRT is still up in the air. Note how close SmartTrack (with more stations than the existing Stouffville commuter line) and the subway extension parallel each other. 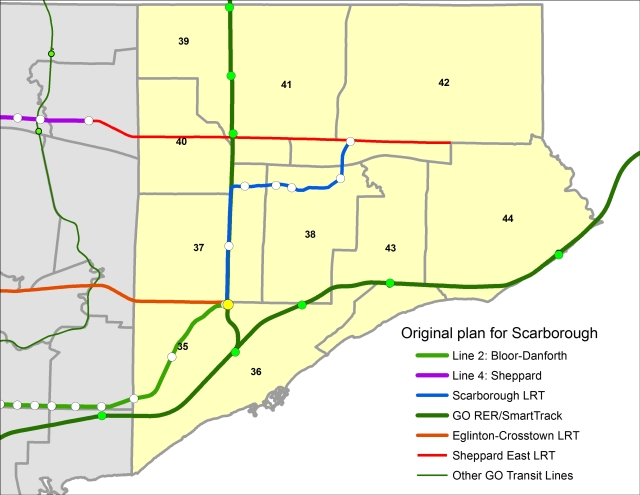 The committed plan for rail transit in Scarborough, as of 2010

The above map shows what the plans were back in 2010, just before Rob Ford’s election.

The province, after significant scaling-back of Toronto’s original Transit City plan, was still comprehensive, including the SRT replacement and extension to Sheppard and Progress (serving Centennial College along the way) and the Sheppard East LRT to Conlins Road (where a facility would provide car storage for both LRTs). Improvements to GO Transit’s commuter lines would provide more frequent trains, with possible fare integration.

A full-build out of transit projects in Scarborough

Had Transit City been funded in its entirety, Scarborough would have a fourth LRT route; the Scarborough-Malvern LRT was proposed for Eglinton Avenue East, up Kingston Road and into Malvern via Morningside Avenue and the University of Toronto’s Scarborough Campus. A second phase of the Scarborough LRT extension would have taken it into Malvern as well. Kennedy Station could have been the Union Station of the east; with a subway line to the southwest, a regional rail line, and three terminating LRT routes to the north, east, and west.

Not pictured in any of these maps is the Downtown Relief Line (which was not part of Transit City) or the Don Mills LRT line (which had serious planning flaws south of Eglinton Avenue and would have been better as part of the DRL subway.)

Transit City certainly had its flaws, but it was, of all the plans for Scarborough, the best one that I’ve seen. Certainly, LRT is the way to go; it’s a shame that “subways, subways, subways” is still the mantra at City Hall and Queen’s Park.

This entry was posted in Maps, Toronto, Transit and tagged Scarborough, Subway, Transit. Bookmark the permalink.

4 Responses to Does Scarborough need a subway extension? (No, it doesn’t.)