On Thanksgiving weekend, my partner and I made the trip out to Stratford to get away from Toronto for two days and see two shows: Macbeth and The Hypochondriac. Both plays were excellent, and we had a lovely time strolling through Stratford’s downtown and parks as well. We took the train to Stratford, unfortunately it’s not a very convenient option for festival goers, nor for anyone visiting Stratford or for those who live there.

The Stratford Festival production of Macbeth  (my favourite of the Shakesphere plays I studied in high school) was flawless (Globe and Mail review here). Ian Lake was brilliant as the lead character, the production was fast paced and full of surprises; the set and the weird sisters were especially delightful. (This was in contrast to Stratford’s production of Hamlet last year, which was rather clunky and dispassionate,  apart from Adrienne Gould’s splendid performance as Ophelia.) The Hypochondriac, a new take of Molière’s Le malade imaginaire, was a hilarious satire of the medical profession, performed in homage to its 16th century origins but with regards to its modern audience for its humour to connect. Ian Lake performed again, but in a supporting role as a foppish doctor-in-training who was clearly unqualified for the profession. (Globe review.)

Stratford itself, a city of 30,000 residents, is worth visiting, even if legitimate theatre isn’t your thing. Stratford’s downtown, full of preserved Victorian and Edwardian commercial and public buildings, is bustling. There are many good restaurants and shops to visit, including an independent bookstore and two chocolate shops. There’s a Sunday farmers’ market behind City Hall, and the riverfront is nicely landscaped. There are dozens of hotels and B&Bs in the city that cater to theatre goers and other tourists.

The Shakesphere Festival was formed in the 1950s as the city’s primary industries– furniture manufacturing and railway servicing — were in decline. The gigantic Canadian National Railway locomotive shops, closed at the end of the steam era, remain sitting abandoned. Before Stratford capitalized on Shakesphere, it was best known for a general strike in 1933 where furniture factory workers and chicken pluckers picketed for better working conditions. Since the strike was led by the Communist Workers’ Unity League, the military was called out to suppress the work stoppage. But the soldiers and workers only confronted each other in games of softball and the workers eventually returned to work. 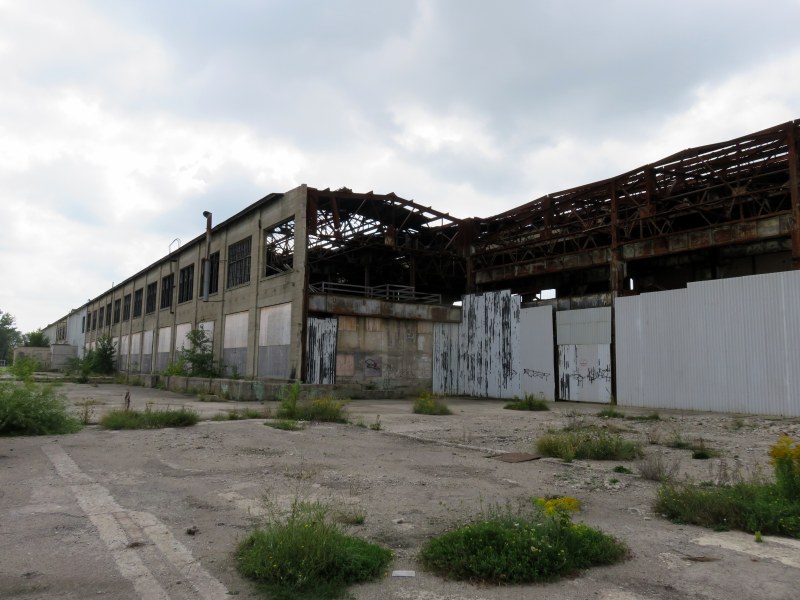 The hulking ruins of the CN Stratford Shops, closed in 1960 and damaged in a 2003 fire.

We left Union Station on Train 85 on Saturday, October 8, and arrived in Stratford at 1:20 PM, nearly two and a half hours later, but only 11 minutes late. Stratford’s matinee performances begin at 2:00 PM sharp, which would make for a rushed taxi ride to the Festival Theatre. Luckily, we didn’t have anywhere to be until the 8:00 PM performance of Macbeth. Instead, we checked into our hotel, went for a walk, and had a relaxed dinner.

VIA Rail’s Toronto-London-Sarnia schedule, which includes service to Stratford. (Source)

It didn’t use to be this way.

In 1955, there were six daily trains between Toronto and Stratford and five trains to London. None of those trains were particularly fast, as they made up to sixteen stops en route to collect passengers, parcels and mail. There was also daily Gray Coach bus service from Toronto, continued by Greyhound, until the 1990s. (At Stratford, bus and train connections could be made to Owen Sound, Goderich, Hamilton, Brantford, and Niagara.)

In the 1970s and 1980s, there were four to five trains between Toronto, Stratford, and London. The train would take two hours, five minutes. Today, there are just the two trains a day to Toronto and London, and no scheduled coach services. London and Kitchener/Waterloo, both important economic and educational centres that are less than fifty kilometres away from Stratford, are accessible only via the meagre train service provided, or by car. (I wrote a bit about the decline of intercity bus service here.)

Part of the problem is the deteriorating track VIA trains must travel on west of Kitchener. GO Transit now operates four weekday round trips between Toronto and Kitchener, all in the peak direction. GO also runs buses between Kitchener/Waterloo and Bramalea GO Station and Square One in Mississauga. Apart from a frustrating 10 mile per hour speed limit west of Guelph Central Station, the track east of Kitchener is in good shape with continuously welded rail and a newly installed signal system. Metrolinx (GO Transit’s parent agency) purchased the track between Georgetown and Kitchener in 2014.

Crawling along between Kitchener and Stratford aboard Train 85

But west of Kitchener, Canadian National (CN) still owns the line, leased to Goderich-Exeter Railway, a short line railway owned by Genesee and Wyoming. GEXR, which operates local freight services, has allowed the track to deteriorate. Between Kitchener and London, the track is still bolted and speeds reduced in several places. At times, Train 85 is reduced to speeds of 16 kilometres per hour (10 MPH) through this section.

The provincial government has dreams of high speed rail linking Toronto, Pearson Airport, Kitchener, and London. VIA Rail, on the other hand, has been pushing for incremental improvements, including new passenger equipment and a dedicated track between Toronto, Ottawa, and Montreal to provide more reliable and frequent services, with modest increases in speed.

Between Toronto and London, incremental improvements, like those sought by VIA Rail, is definitely the way to go, not high speed rail. HSR will ignore important markets like Guelph (a city of over 100,000 and which has a large university) and doesn’t help travellers headed to intermediate destinations such as Brampton and Stratford. Improving reliability, re-routing freight traffic and upgrading tracks, especially through Downtown Guelph and west of Kitchener, should improve travel times by at least 20 minutes between Toronto and Kitchener, and at least 30 minutes to Stratford. A return to five daily round trips would also represent a significant improvement, as would two-way GO service. High speed rail shouldn’t be necessary to make train travel an attractive option for many travelers. It would certainly make it easier to get to the Stratford Festival as well.

In the meantime, the Stratford Festival offers a bus service that allows Torontoians to easily access the festival without a car. The bus picks up festival goers near Union Station and drops them off at the theatre’s front door. It’s fast (less than two hours) and inexpensive, only $25 return. But passengers are required to have their theatre tickets with them to ride, so it doesn’t help local residents reach nearby cities. It is also of limited use for potential visitors living elsewhere. An improved train service would not only benefit Stratford residents, it would make the festival more accessible to visitors living in places like Kitchener, Guelph, Brampton, and London.