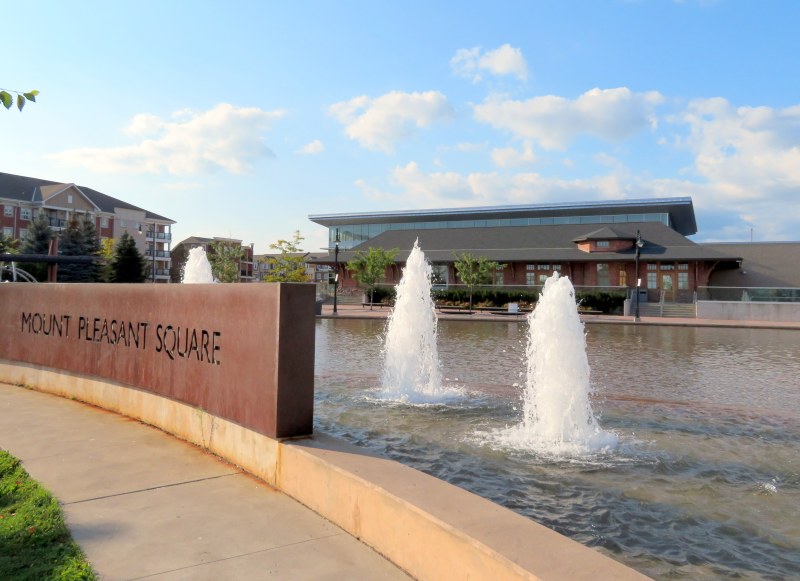 A few weeks ago, I visited Cathedraltown, a subdivision in north Markham built in the new urbanist style. Cathedraltown made the news thanks to a controversial metallic sculpture of a cow installed in a parkette. (Last week, Markham City Council voted to move the sculpture.)

I came away disappointed by Cathedraltown. Despite a dense built form, and a main street lined with storefronts, it did not live up to the new urbanist promise: it was still a very car-centric subdivision, without the retail, nor the density required to make it a walkable community. The central focus is a Slovak-Catholic cathedral, recently re-opened after lengthy dispute between the development company and religious leadership. “No trespassing” signs still stand in front of the imposing church. Transit connections are poor, making a car virtually necessary to get even to nearby employment areas.

Mount Pleasant, in Brampton, fares somewhat better, despite some similar issues to Cathedraltown. What distinguishes it though are superior transit connections, and a better-programmed central focus.

Mount Pleasant started off as a small settlement between Brampton and Georgetown, where Highway 7 and 3rd Line West (later Creditview Road) crossed the Canadian National railway line between Toronto and Guelph. For most of its existence, it was little more than a collection of houses, two churches, a motel and a service station. By the 1960s, the local trains no longer served the flag stop there, and Highway 7 — now Bovaird Drive — bypassed the hamlet on a new railway overpass in the 1960s, also severing Creditview Road. 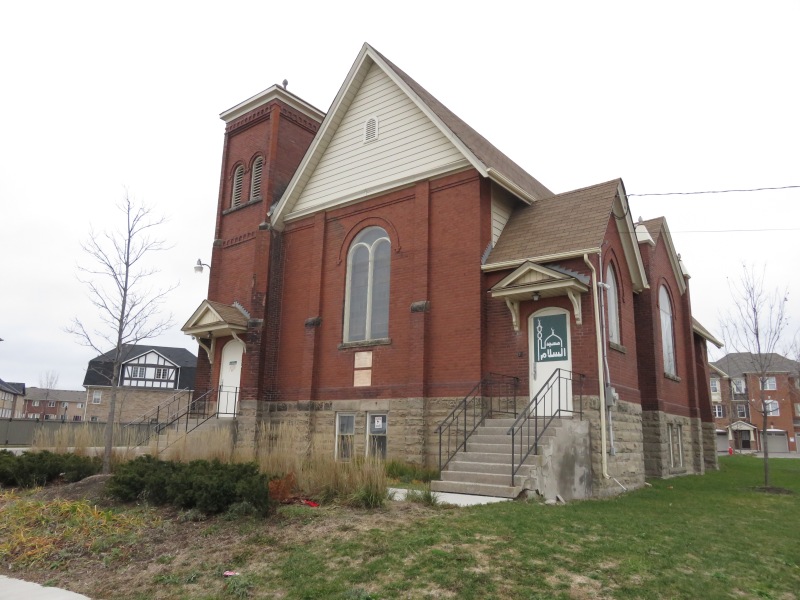 Mount Pleasant GO Station opened in 2006, just as northwest Brampton was transforming from farmland to new subdivisions. The GO Station was built like any other in Toronto’ suburbs: a large parking lot, bus loop, and pick-up and drop-off area, with easy access to Bovaird Drive. But on the north side of the tracks, the City of Brampton, and the developer, Mattamy, tried something different.

At the core, the City of Brampton built a new library branch that incorporates the dismantled Canadian Pacific Railway station that used to stand on Queen Street in Downtown Brampton. (The station was moved in 1980 to a then-rural site on Creditview Road when it was threatened by demolition by the CPR. But the station building was left to rot before heritage conservationists carefully dismantled the structure.) Behind the library is a public school. In front, there’s a public square that includes a small playground, as well as a reflecting pond that’s a skating rink in the winter. 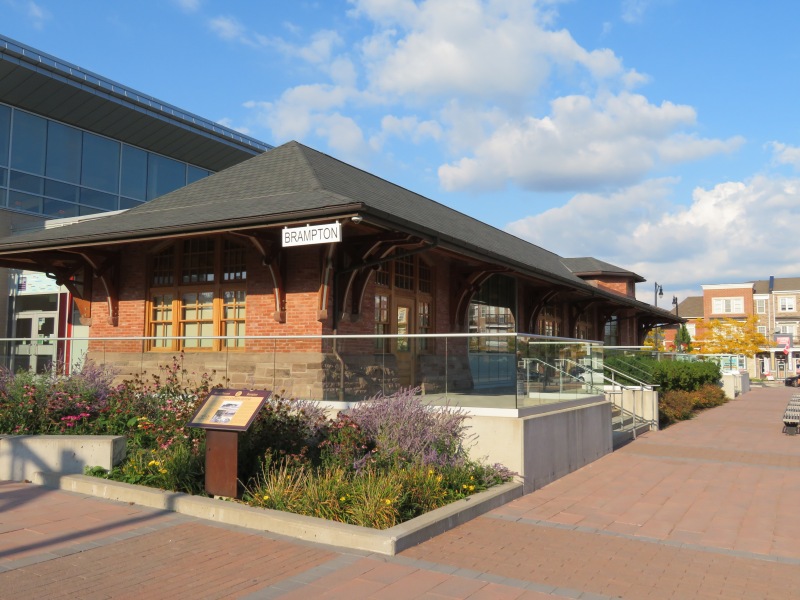 To the west of the square are several low-rise apartment buildings, the sort of “missing middle” housing needed in Toronto’s established urban neighbourhoods. To the east are several retail/residential blocks, the sort of mixed use buildings that are uncommon in new subdivisions. The storefronts are all mostly occupied with businesses serving the local neighbourhood, such as hair salons and spas, a convenience store, a dentist’s office, and a restaurant. To the south are entrances to the GO Station and the bus loop for GO and Brampton Transit buses. 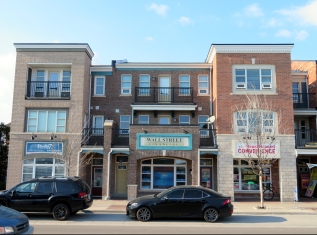 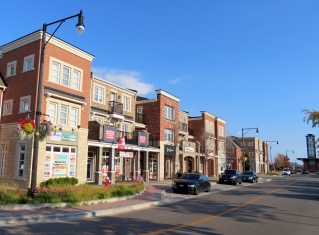 Beyond are townhouses and detached and semi-detached houses, on small lots. While there’s good density immediately surrounding the square, the good urban density does not continue for long, limiting the market for the local retail spaces. Furthermore, the strorefronts cannot be seen by motorists on Bovaird Drive, and it is not easy to drive from Bovaird to Mount Pleasant Village. 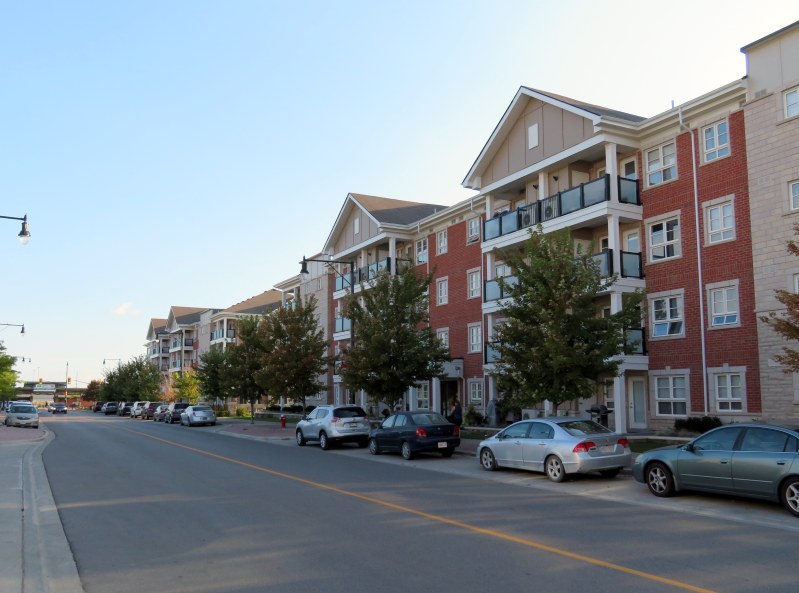 “Missing Middle” apartments on the west side of Mount Pleasant Square

The semi-successful new urbanism at Mount Pleasant Village contrasts with the surrounding development in northwestern Brampton. East of Mount Pleasant Village, there’s a large big-box shopping centre anchored by a Fortinos supermarket. To the south, the GO Transit parking lot and six-lane Bovaird Drive dominates the landscape. To the south of that, there is more typical suburban residential and commercial development. Mount Pleasant is nice, but it’s very limited, without the large urban population necessary to support interesting retail. But by virtue of a centralized public school and good local and commuter transit connections, it is possible for a family in Mount Pleasant Village to live without a car, or at least minimize their need for one. 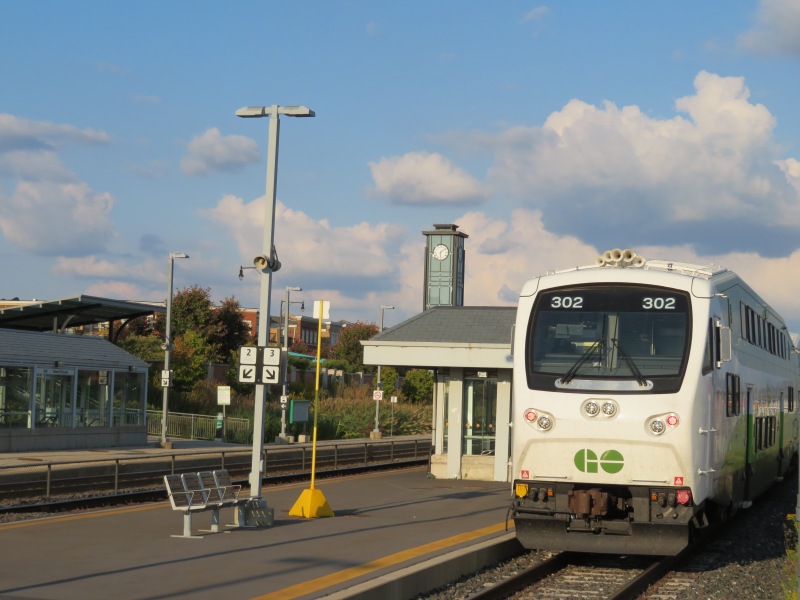 What I found most encouraging, though, was the small market that takes place on Thursday evenings at Mount Pleasant Square between June and October, from 5PM to 9PM, which I came across during my recent visit. The market hours are timed for when the afternoon GO trains arrive from Toronto Union Station. This is the kind of programming necessary to make this a true urban community. 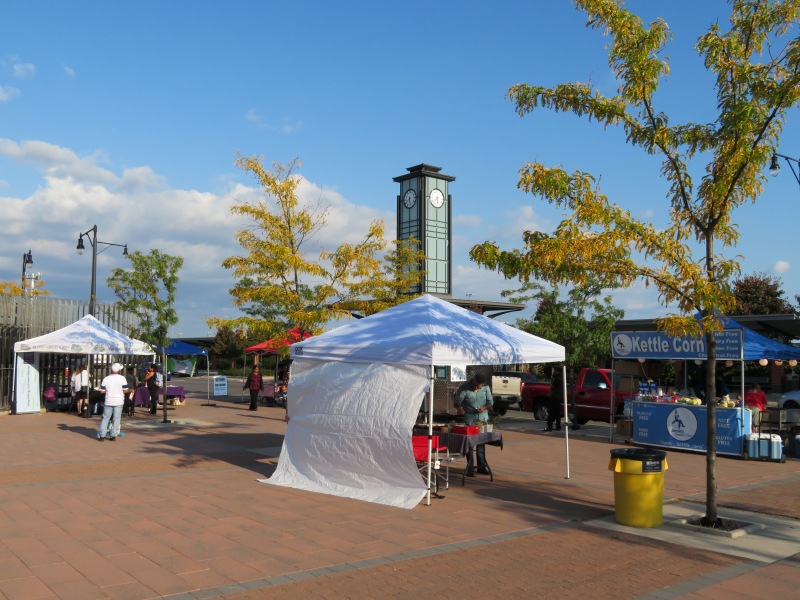 What makes Mount Pleasant work better than Cathedraltown or Cornell in Markham is the better transit access and a good, useful central public space. There are some initiatives, like the market, to encourage people to linger and support local businesses. But like other GTA new urbanist subdivisions, it’s too small, and not dense or large enough to support retail and other amenities to make it a great walkable community. There are no major employers nearby either to support local businesses, and residents must drive or take transit to work.

Brampton will likely have more luck encouraging intensification and development of its existing urban downtown core, which is slowly attracting new and more interesting businesses, as well as new residential development. Downtown has even better transit connections as well. (Though there are threats there too: Metrolinx plans to build a new GO parking lot, replacing houses and offices, and Brampton Council rejected a direct Hurontario-Main LRT connection.)

Mount Pleasant is better than most new subdivisions in Greater Toronto, but it’s not quite bold enough.

I’ve spent a fair bit of time thinking and wondering about this neighbourhood, but have never managed to get out for a visit. Thanks for this post!

Good article. I share your feelings about our new ‘communities’ – I think they are lacking in large part because they try to be perfect right out of the gate which is impossibly hard compared to communities that evolved over decades with all that local wisdom and experimentation along the way. Hopefully these places aren’t cast in stone and have left some room for evolution over time. Good comparison of the two, but I wonder if the failure of Cathedraltown is really about the fact that churches just really aren’t that much of a high traffic attraction in 2017 (Particularly if they are pastiche and boarded up). It the locals don’t all regularly attend the church, it would take some a very strong congregation or some spectacular architecture to bring any meaningful number of people into the village – otherwise it’s just a park. Lacking this, a simple utilitarian, high traffic focal point (like transit hub or market place) is a much better bet for creating activity.