I continue the mapping of Toronto’s 25 council races by taking a look at two Scarborough wards.

Ward 22, Scarborough-Agincourt, was a battle between two right-leaning incumbent councillors, Norm Kelly and Jim Karygiannis. Ward 23, Scarborough North, was one of only two wards that didn’t have a councillor running for re-election.

Ward 22, Scarborough North, pit 77-year old council veteran Norm Kelly against 63-year old council rookie Jim Karygiannis. They share similar politics (both are centre-right councillors, and both are former Liberal MPs), but have different styles. Ward 22 is bounded by Victoria Park on the west, Midland Avenue on the east, Highway 401 on the south, and Steeles Avenue on the north.

Norm Kelly was first elected to municipal politics in 1974 as an alderman on Scarborough council and a Liberal MP between 1980 and 1984. He returned to Scarborough council in 1994 and has served on Toronto City Council since the 1997 amalgamation, and was a reliable ally on council for mayors Mel Lastman and Rob Ford.

Under Mayor Ford, Kelly was named deputy mayor in August 2013, only a few months before council stripped Ford of most of his powers as his personal scandals deepened. Kelly assumed most of the mayor’s responsibilities and served admirably.

Despite his personal popularity and his right-leaning credentials, Kelly was left outside new mayor John Tory’s inner circle. Instead, Kelly, who became better known as “@norm” spend his time boosting his social media presence, getting into Twitter spats on behalf of rapper Drake, and pitching merchandise. His millennial-baiting “6 Dad” act was cute for a short time, but became increasingly irritating, especially as his hip social media presence contrasted with his conservative politics and his denial of climate change.

Jim Karygiannis was a Liberal MP from 1988 to 2014, and had a reputation as a socially conservative Liberal. Despite being a sitting MP, he chose to resign and run for city council, perhaps feeling out of place in a more socially progressive caucus. Karygiannis’ first term on council was unremarkable, but he is known as a community-oriented councillor, responsive to local needs (though I very much disagreed with his response to the death of a young boy in his ward after he was struck by a car on a residential street earlier this year).

Kelly was disadvantaged by the fact that part of his old ward, Ward 40, was not included in the new Ward 22 (the area south of Highway 401 and north of Ellesmere Road), while the entirety of Ward 39, Karygiannis’ turf, was part of the new ward. On the east side, the boundary shifted slightly eastward, from the GO rail corridor to Midland Avenue.

In the end, Karygiannis won with 46.8 percent of the vote to Kelly’s 37.0 percent. Karygiannis placed first in all but three polls in former Ward 39, and also 9 polls on Kelly’s old turf. The “6 Dad” finally got his long-overdue retirement. 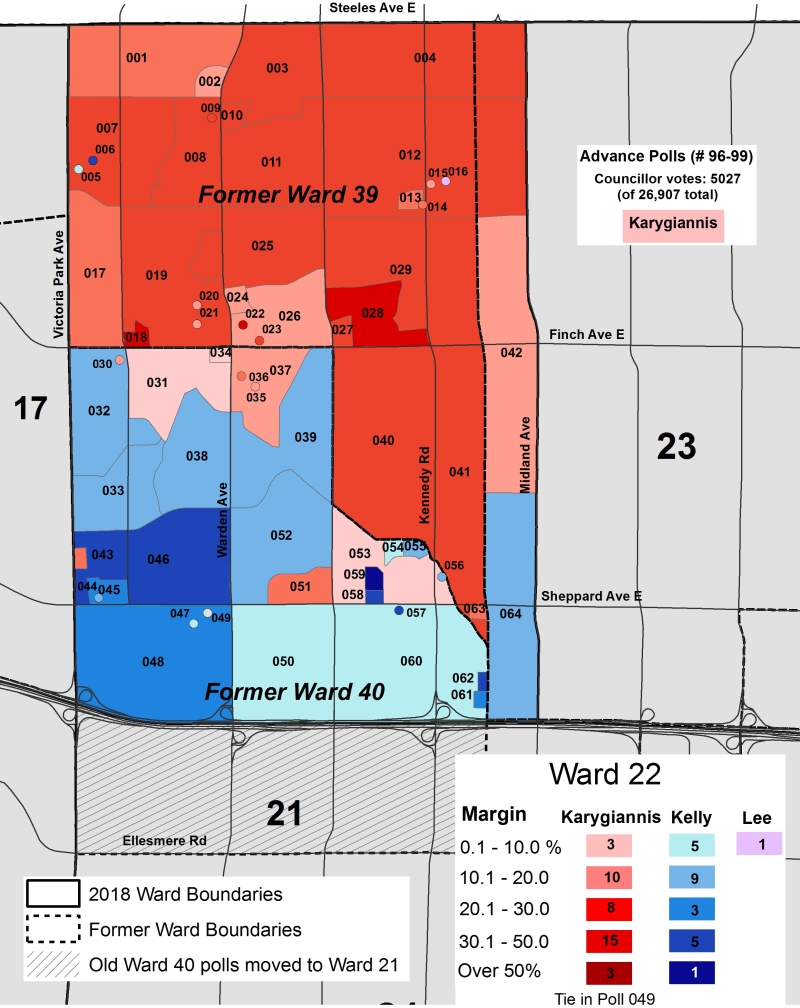 Ward 23 was one of only two council races that didn’t have a councillor seeking re-election (the other was Ward 19). Chin Lee, who represented the area for many years, resigned early this year to run for provincial office as a Liberal, and was replaced by an appointed councillor. Though Lee lost, he did not seek a return to municipal politics, unlike his colleague Shelley Carroll.

The new Ward 23, located north of Highway 401 between Midland Avenue and Neilson Road, encompassed almost the entirety of former Ward 41 and the western third of former Ward 42, previously represented by Neethan Shan.

Among those running in Ward 23 were Cynthia Lai, past president of the Toronto Real Estate Board; Maggie Chi, who worked as a constituency assistant in Councillor Lee’s office; Felicia Samuel, who ran for the New Democrats in the 2018 provincial election. Lai had run in the 2014 election against Chin Lee, placing second with 23.0 percent of the vote.

In 2018, Lai won, getting 27.0 percent of the vote in a crowded field of eleven candidates. Chi placed second, with 20.0 percent of the vote. Samuel came in third. Lai and Chi did best in the northwestern part of the ward, where a large segment of the population identifies as Chinese-Canadian. Samuel did well in former Ward 42, especially in Malvern. Maggie Chi placed first in only three polls, but she was the second-place candidate in most polls that picked Cynthia Lai.

I was expecting to see Felicia Samuel do better because of her impressive run for provincial office in the same area. That was a bit of a disappointment.

Also worth noting that Lai was the provincial PC candidate in the 2005 Scarborough-Rouge River byelection that elected Bas Balkissoon for the Liberals.