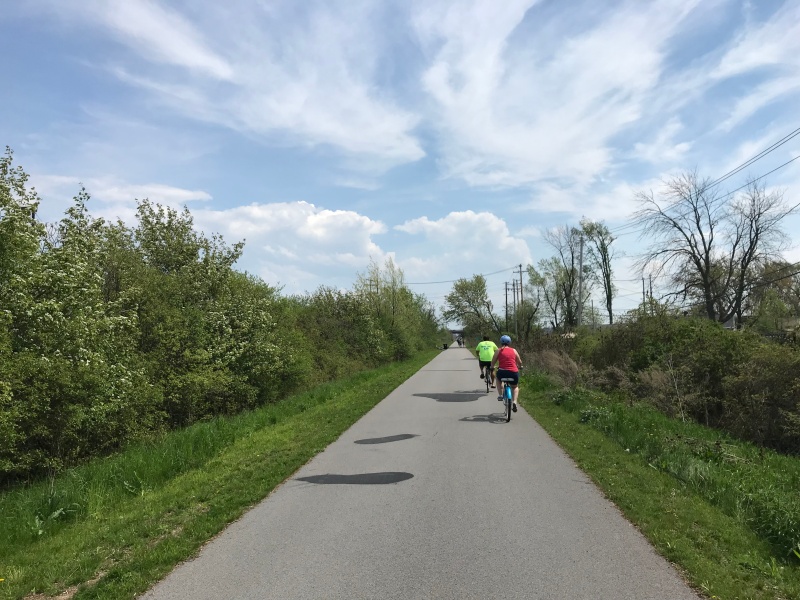 Back on Victoria Day weekend, I biked down to Toronto’s Union Station, loaded by wheels onto a GO train, and headed for Niagara. I have biked through Niagara before, and it is a very pleasant place for cycling, with many paved paths, quiet roads, and paved shoulders and bike lanes along many busier roads. Charming towns such as Niagara-on-the-Lake and Port Colborne offer many places for cyclists to eat, drink, and stay. If you haven’t yet done so, GO Transit’s bike train is worth checking out this year.

It is also possible to cross the border by bike as well, where there are many great bike routes and parks worth exploring. On my last trip, this is exactly what I did. 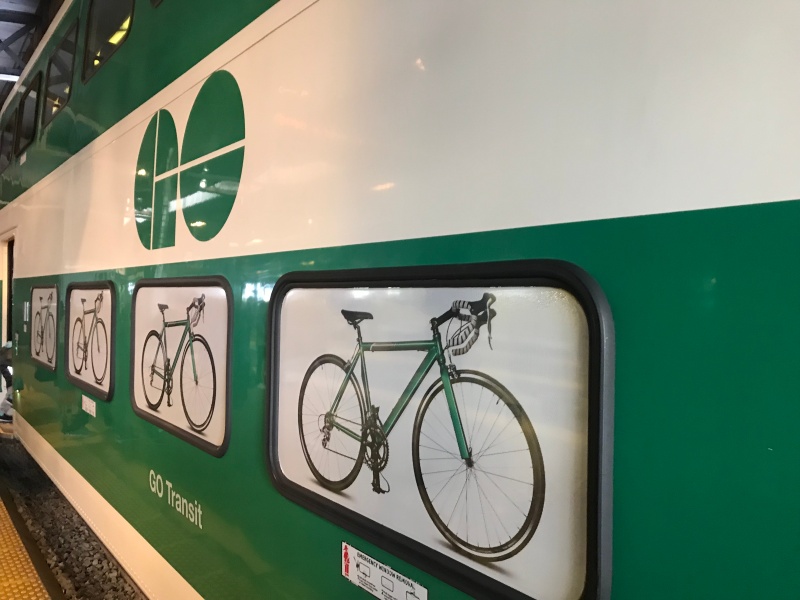 The Peace Bridge, at the end of the Queen Elizabeth Way in Fort Erie, also permits pedestrians and cyclists, though cyclists must walk their bikes on the sidewalk. A multi-year rehabilitation project closed the sidewalk, but work was recently completed and the sidewalk will open shortly. In the meantime, the Peace Bridge offers a shuttle van (I called on July 1 2019 to confirm its operation, the representative I spoke to advises to call the Peace Bridge office to request a pick up). The Peace Bridge’s website offers detailed instructions on how to access the crossing on both sides.

The Peace Bridge is free to pedestrians and cyclists in both directions, though cyclists on the Rainbow Bridge are charged $1 (US or Canadian) to travel to Canada.

I chose to take the Rainbow Bridge both ways. It being a long weekend, I had to wait in traffic both ways, but at least the views are decent, and it’s a flat bridge deck.

Crossing the Rainbow Bridge by bike means waiting in traffic…

…though at least the view is nice

Once across in Niagara Falls, New York, it is easy to access Niagara Falls State Park, which offers great views of the Falls, and is free to enter (though there are charges for parking and for accessing the viewing tower and lower gorge trails). Cyclists are asked to dismount and walk in sections of the park, though it is a reasonable request due to the crowds.

I then biked along the Niagara Scenic Parkway upriver towards Tondawanda. The parkway was formerly named the Robert Moses State Parkway, but it has since been tamed to improve pedestrian and cycling facilities along the Niagara River, with the road closed completely at the Rainbow Bridge, and narrowed elsewhere. I doubt the Power Broker would have approved. 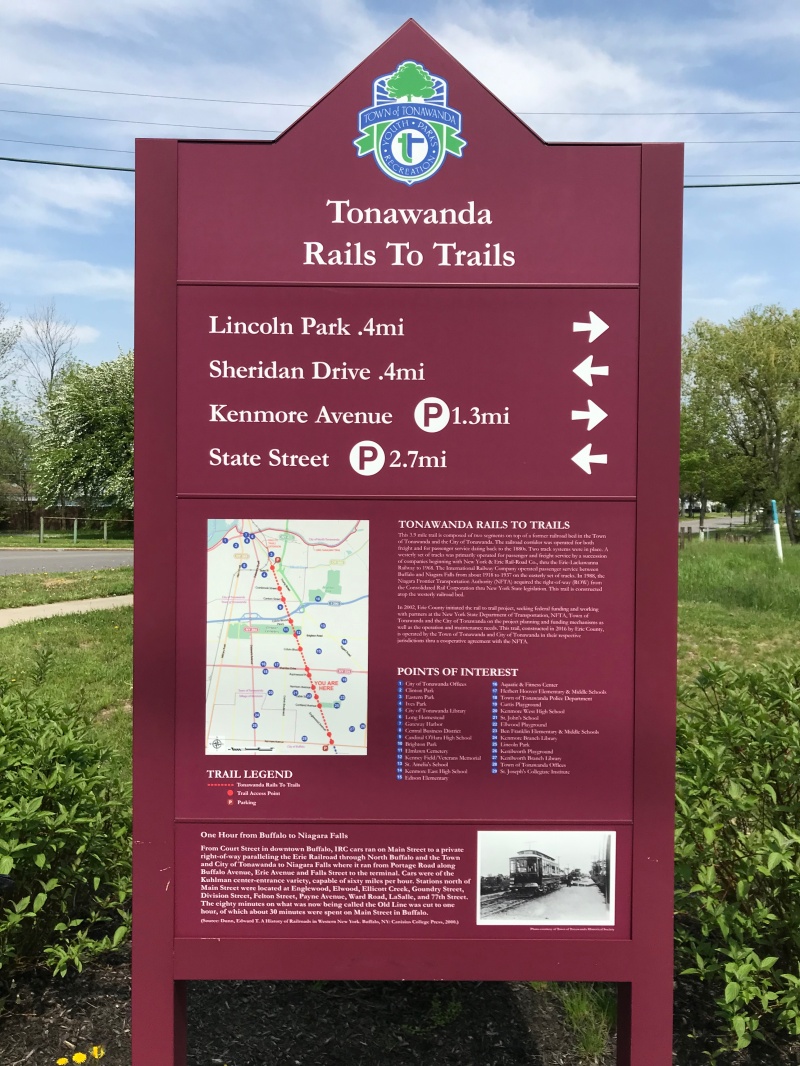 The Niagara Frontier Transportation Authority, the public successor to the IRC, retained ownership of the Tonawanda corridor, planning a spur line of the new Buffalo Metro LRT. But local opposition and a lack of funds derailed those plans; happily, it is now a wonderful trail with safe, signalized crossings at every major cross street.

Once in Buffalo, there are many bike lanes, and lower levels of traffic. Not once was I honked at or felt threatened by motorists. The city is mostly flat, and there are many neighbourhoods and landmarks worth checking out, with great restaurants, bars, and breweries. There are many hotels and bed and breakfasts in Downtown Buffalo and in the Allentown area. 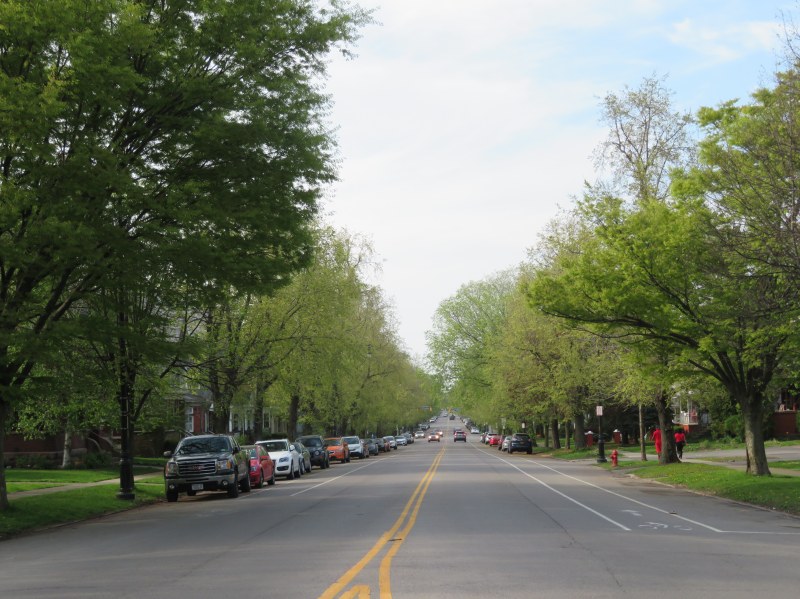 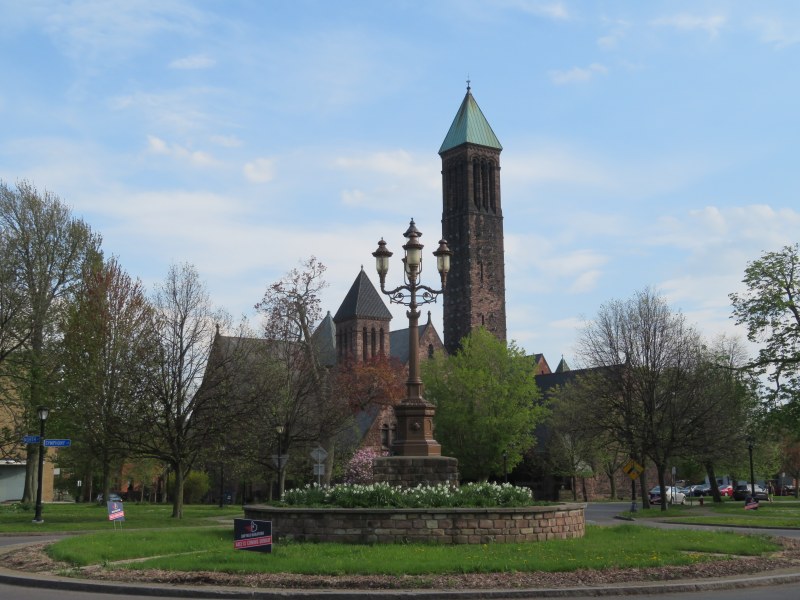 Symphony Circle, one of many traffic circles as part of Fredrick Law Olmsted’s parkway system developed for Buffalo

Visiting Buffalo on a Sunday/Monday of a Canadian long weekend also meant being in town on normal working day on Monday, where commercial and institutional buildings are open to the public. The view from the observation deck at Buffalo City Hall is fantastic, while the Council Chamber is an art deco masterpiece.

I had lunch in the Ellicott Square Building, which, when completed in 1896, was the largest office building in the world. The building was designed by Charles Atwood of Chicago’s D.H. Burham & Company, and its interior courtyard is spectacular. Several food vendors operate weekdays.

Buffalo is an attractive cycling destination because a back-up option exists. The NFTA buses are all equipped with bike racks; the Route 40 bus runs direct from Downtown Buffalo to Downtown Niagara Falls, New York. The Monday was cool, wet, and windy, and I was tired (I later found out I was coming down with a bad cold), so I opted to spend the extra time cycling around downtown and the Erie Canal Harbour area and take advantage of the bus service back.

The GO Niagara bike train operates every weekend until Labour Day, and again during Canadian Thanksgiving Weekend. The Buffalo-Niagara region has a lot to offer cyclists, and it is worth your consideration.

One reply on “Biking off to Buffalo”

This is a great piece, Sean. I’ve shared it with many Buffalo friends.