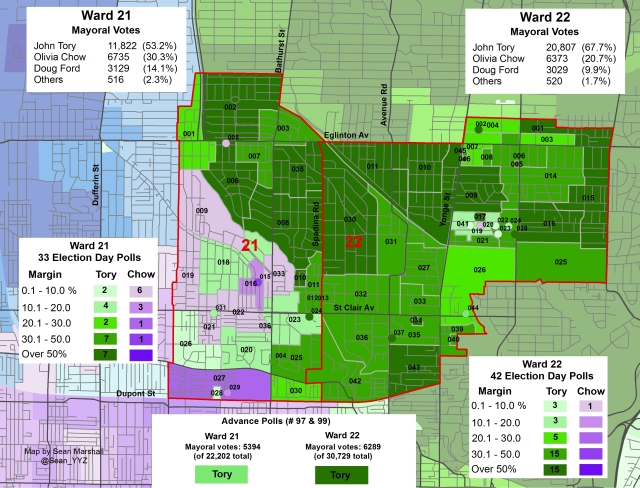 The Christmas Eve edition in my series of posts illustrating the results of the 2014 Toronto municipal election results is definitely not the most exciting. (If you want excitement on Christmas Eve, head to Yorkdale or the Eaton Centre before they close, or go watch Die Hard.) Newly elected mayor John Tory came in first place by over 50% in each of the three wards, and three popular incumbent councillors were returned to office by landslides.

In one of my earlier posts, I looked at Ward 16, the other Midtown ward. It at least had a very interesting race for councillor; the seat was up for grabs when Karen Stintz ran for mayor.

John Tory won all three wards by wide margins, but he was most popular in Ward 25  – Toronto’s wealthiest – winning with 69.4% of the vote there.

Olivia Chow came in first place in 11 polls in Ward 21, located mostly in Hillcrest Village and along Vaughan Road (where there are many older rental apartment buildings). Chow won one poll in Ward 22, a rental apartment building in the Davisville-Merton neighbourhood; she came in a close second place in neighbouring polls. In the affluent Forest Hill and Cedarvale neighbourhoods, Tory won polls by margins of over 50%.

Doug Ford came in first place just one poll – Poll 031 in Ward 25, a TCHC property on Yonge Street. Otherwise, Tory won by comfortable margins in most other polls in Ward 25, with the exception of the southwest corner, closest to Yonge and Eglinton, where Chow came in a close second place in several polls.

As all three wards had popular incumbent councillors that did not face any serious challengers, I did not create maps of the council races in Wards 21, 22, and 25.

In Ward 21, long-time city councillor Joe Mihevc won with 76.9% of the vote. Mihevc, who is one of the longest-serving members of Toronto City Council, is one of the best cases against term limits (he’s simply wonderful).

First term incumbent Josh Matlow in Ward 22 looked like he was going to be acclaimed. No other candidate registered in that ward until September, when three individuals – Sarfraz Khan, James O’Shaughnessy, and Bob Murphy put their names forward. It didn’t matter much, Matlow won with 86.2% of the vote. Matlow started off his first term trying to be a neutral centrist, with his own Sunday radio show on city politics (which was taken over by Rob and Doug Ford), but he eventually became a principled, effective representative at City Hall. I’m happy to see him back.

I’ll soon get to posting an article on Ward 26 –  the other half of Don Valley West. This ward is one of the most interesting; the only one in the last election where an incumbent was turfed; it’s also one of the most economically polarized wards in Toronto.