Note: On October 2, I wrote a follow-up to this post, including a few new maps, some additional insights. All three races  — Toronto Centre, University-Rosedale, and Spadina-Fort York, remain interesting and close Liberal-NDP battles.

As I mentioned on this blog previously, describing the “Drawing the Lines” ward boundary review now underway, there are new federal electoral district boundaries for the upcoming Fall 2015 election. Toronto will have 25 Members of Parliament (MPs) after the next election; Downtown Toronto and North York both get an additional seat and Scarborough gets half a seat (it currently shares a electoral district with Pickering).

As a downtown resident, I wanted to explore how the new electoral map might look like in the next election, and see whether the New Democratic Party (NDP) would have a chance at picking up one of those three downtown seats, as both Toronto Centre and Trinity-Spadina are currently represented by high-profile Liberals.

(An aside: my politics have long leaned left and towards the New Democrats; though I am not my any means a strict or loyal partisan. I have friends who are loyal Liberals,  New Democrats, and Greens; my own voting decision depends on the race – in the 2011 general election, I voted Liberal, as I lived in York Centre, a riding held by NHL Hall of Famer, lawyer and great Liberal Ken Dryden, who sadly lost to Conservative Mark Adler. I soon moved to Davenport, joking that I had traded Dryden for [newly elected NDP MP Andrew] Cash. Brampton West Liberal MP Colleen Beaumier earned my very first vote when I was 18 years old, but I have since voted NDP provincially and federally in most other elections.)

In the 2011 general election, in which Stephen Harper’s Conservatives won a majority government (and Jack Layton led the NDP to its greatest federal victory, winning 103 seats and official opposition status), both Toronto Centre and Trinity-Spadina re-elected their popular incumbents – Olivia Chow in Toronto Centre, former Toronto city councillor and Layton’s spouse, and Bob Rae, former New Democrat and Premier of Ontario, later a Liberal MP and leadership candidate. Chow won with 54.5% of the vote in Trinity-Spadina; Rae won with 41.0% of the vote in Toronto Centre.

As you can see in the map below, Chow placed first to most polls in in Toronto Centre, except for a few polls near the Waterfront (the Conservatives came in first in the Harbour Square condo complex), in the east Annex closest to Yorkville and a few condominium and seniors’ residences buildings elsewhere. Christine Innes, running for the Liberals, came in a distant second with 23.4% of the vote.

In Toronto Centre, Liberal Bob Rae won with 41.0% of the vote; the NDP’s Susan Wallace took a respectable 30.2%, while Conservative Kevin Moore took 22.6% of the vote. In Toronto Centre, the Conservatives took several polls in the wealthiest parts of the riding; the “old money” Rosedale neighbourhood and several polls in Bloor-Yorkville, home of many of the most expensive condominium high-rises in Canada. The Liberals did well in polls throughout the riding (in Rosedale, Yorkville, Cabbagetown and St. Lawrence), while the NDP came in first most polls in Church-Wellesley, St. Jamestown, Moss Park, and Regent Park.

Since the 2011 election, both Toronto Centre and Trinity-Spadina saw hotly contested by-elections, both were two-way races between the Liberals and the New Democrats.

After Michael Ignatieff led the Liberals from second place in a minority parliament to third place in a Conservative majority (losing his own Etobicoke-Lakeshore seat to the Conservatives), he resigned; Bob Rae, a former leadership candidate took over as interm leader until Justin Trudeau’s  selection as Liberal leader. In June 2013, after that leadership convention, Rae resigned as MP, explaining that his legal work was taking more of his time; he most likely tired of partisan politics after his many years in provincial and federal governments.  This opened up the Toronto Centre seat for a hotly contested by-election, held on November 25, 2013.

The Liberals nominated Chrystia Freeland, a writer and journalist (Globe and Mail, Financial Times, Thomson Reuters, author of Plutocrats: The Rise of the New Global Super-Rich and the Fall of Everyone Else). The NDP also nominated a well-known journalist/writer, Linda McQuaig, best known for her columns in the Toronto Star, and for books such as Shooting the Hippo: Death by Deficit and Other Canadian Myths and The Trouble with Billionaires.

On March 12, 2014, NDP MPP Olivia Chow resigned her seat to run for mayor of Toronto (despite a first-place start, she came in third behind John Tory and Doug Ford.) Like Bob Rae, Chow held the seat since the 2006 general election.

A by-election was called for Monday June 30, 2014, right before Canada Day and a day many people have off due to the long weekend. Not surprisingly, voter turnout was very low; only 31.9% of eligible voters turned out (compared to a respectable 68.8% in 2011). Adam Vaughan won, with 53.6% of the vote; Cressy came in a distant second, with the support of only 34.1% of electors who bothered casting a ballot. I suspect Cressy’s lack of name recognition, Vaughan’s personal popularity and Justin Trudeau’s own popularity at the time all contributed to his win, as well as the larger, condo-dwelling population. After all, the provincial NDP lost Trinity-Spadina in the provincial election that spring to the Liberals as well.

The map below shows the poll-by-poll results with the two by-elections. The Liberals did a pretty good job painting the town red.

The Conservatives’ support plummeted in both by-elections, but so did voter turnout. As mentioned, the Trinity-Spadina by-election (as well as three other by-elections; one in Scarborough-Agincourt, two others in Alberta) was scheduled in the middle of a long weekend. But Toronto Centre’s turnout fell from 62.9% to 38.2% as well despite media attention and two well-known candidates.

For the upcoming 2015 election, Toronto Centre and Trinity-Spadina get split into three new electoral districts; the population increase fueled by the condominium boom downtown necessitated the additional representation.

The new Toronto Centre loses the Rosedale and Bloor-Yorkville neighbourhoods, which make up part of the new University-Rosedale district. (It also loses part of the St. Lawrence neighbourhood south of The Esplanade, as well as the historic parts of the Distillery District). Trinity-Spadina is split at Dundas Street; the north section which includes the Annex, Little Italy-Palmerston Seaton Village and University of Toronto becomes part of University-Rosedale. South of Dundas becomes Spadina-Fort York, stretching from Liberty Village to the East Harbourfront near the mouth of the Don River and including most of Toronto’s new high-rise neighbourhoods (City Place, Liberty Village, the Waterfront, the Entertainment District). Spadina-Fort York’s population mostly lives in high-rises.

In Spadina-Fort York, Adam Vaughan will run as a de facto incumbent for the Liberals; as of this writing, the NDP has yet to nominate a candidate. I expect that at this time Vaughan will be easily re-elected; I also think he’s the kind of civic-minded, urban Liberal that the party needs, and a good constituency MP.

Toronto Centre Liberal incumbent Chrystia Freeland will run in University-Rosedale, while the NDP nominated Jennifer Hollett, a television personality and political activist who ran and lost the 2013 nomination to McQuaig. Hollett is a great candidate, but I suspect that it will be difficult (though not impossible) to defeat Freeland, especially in the east end of the new riding.

The race in the new Toronto Centre electoral district will be the most interesting. The conservative, wealthy Rosedale and Yorkville neighbourhoods have been decapitated from the new smaller riding; and there is no incumbent running. Linda McQuaig was recently nominated to run for the NDP here; the Liberals nominated Bill Morneau, a businessman (of Morneau Shirpell), former chair of the respected, but right-wing, business think tank, with other business and community service credentials.

I wondered why the Liberals would nominate a candidate in lower-income, urban Toronto Centre; I figure he’d be a better fit in say, Don Valley West or even Eglinton-Lawrence and run against (and hopefully defeat) a Conservative. (The same could be said about former Toronto Police Chief Bill Blair, who will be running for the Liberals against incumbent NDP MP Dan Harris in Scarborough Southwest.) But from what I heard, Morneau was interested in running in Don Valley West, but Liberal Rob Oliphant, defeated by John Carmichael in 2011, will be seeking to retake the seat in 2015.

It’s so hard to predict the outcome of any election; after all pollsters got it wrong in the last provincial elections in Alberta and British Columbia. I’m only an armchair amateur musing about maps that I make, but here’s some thoughts about the each party’s chances, interpolating the results of the 2011 election and the by-elections to the new riding boundaries.

If we were to go with the 2011 boundaries, the NDP would win all three. Votes for Olivia Chow west of University Avenue/Avenue Road (Annex, Palmerston-Little Italy et al.) would cancel out the Liberal and Conservative votes to the east. Toronto Centre would be the closest race, but the NDP would have won by just over 1%. (And Chow’s popularity wouldn’t be a factor; these were all votes for Susan Wallace.) 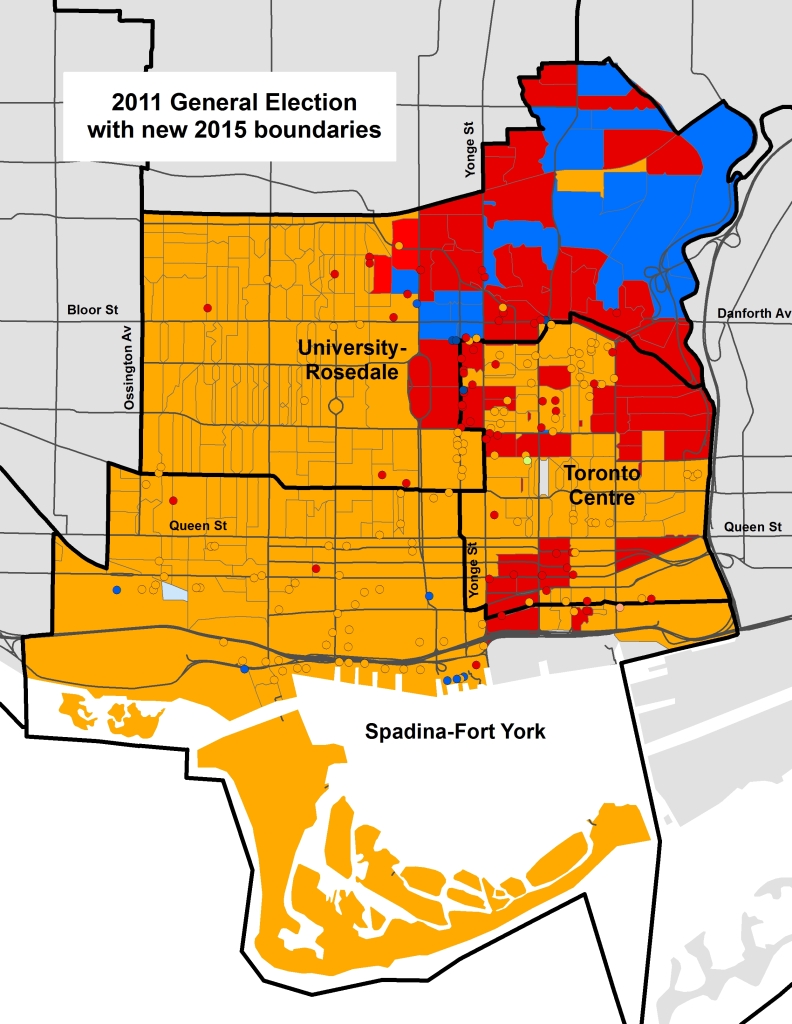 Going by the results of the 2013/2014 by-elections, the Liberals would sweep all three ridings, but again the closest race would be in Toronto Centre, where Freeland won by only 3.5 percentage points. The Liberals would win with majorities in University-Rosedale and Spadina-Fort York; and in 2015; the incumbents would be running there.

A lot can happen between now and October 19, 2015. Elections, even at the local riding level, can be decided by both the effectiveness of the national and local campaigns, voters’ moods, current events, scandals, the performance of the national leaders, popularity of the local candidates, and so on. I’m not going to get into that!

But I think Adam Vaughan will win in Fort York-Spadina, as will Chrystia Freeland in University-Rosedale, though the NDP’s Jennifer Howlett has an outside chance of taking it. I think Linda McQuaig has a very good chance of taking Toronto Centre, and would be a better fit for the constituency than Bill Morneau.

Needless to say, Toronto Centre will be a very interesting race to watch.

Thank you for this review! I’m a voter in, it turns out, the new University-Rosedale riding, and your site came up when I started querying the new electoral district structure in downtown TO. Work, work, work! Until I found this. Such an excellent, informative analysis – particularly the redistribution of historical votes by party into the new districts.

What do you think now that Ms Chow has declared for Spadina-Fort York, I wonder?

Yes, with Olivia Chow’s candidacy in Trinity-Fort York, I’m working on an update to this post. All three ridings are in play for both the NDP and the Liberals, which is pretty exciting for political junkies. Stay tuned!

[…] Due to riding redistribution, you may be voting in a different riding than 2011, even if you haven’t moved. This may […]