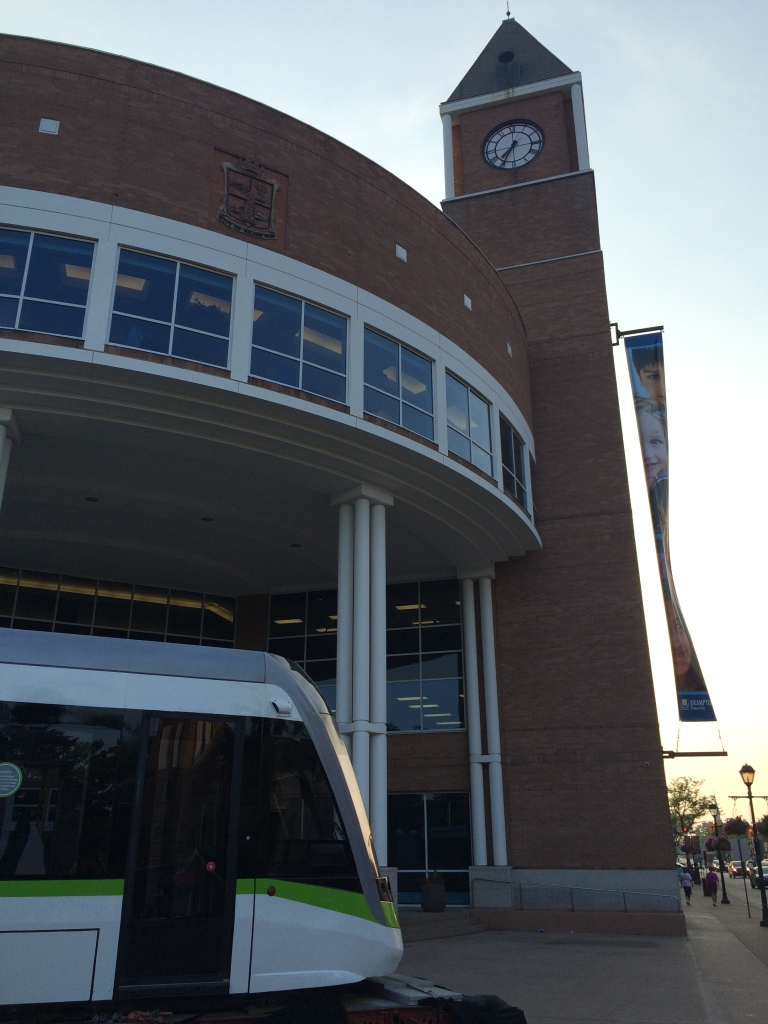 As of Tuesday, July 28, the Toronto Star has not published any letter to the editor responding to last Tuesday’s front-page article by San Grewal questioning the ridership of the northern section of the Hurontario-Main LRT, or any corrections. I find myself very much disappointed by this. I know I was not the only reader to submit a letter to San Grewal’s poor reporting, to which I link below.

I wish to express my disappointment with the publication of a badly researched and one-sided article by San Grewal on the opposition to the Hurontario-Main LRT.

The article starts with by getting its numbers wrong. In the second paragraph, it claims that the LRT’s capacity will be 15,000 riders per hour per direction (PPHPD). This is false. The City of Brampton’s own staff report, which recommended that council approve the funded Main Street LRT [which can be found here:http://www.brampton.ca/EN/City-Hall/meetings-agendas/PDD%20Committee%202010/20150622pis_H10.pdf], states that the maximum capacity of the LRT is 7200 PPHPD, less than half the figure Grewal claims.

The comparison to the Sheppard Subway, which Grewal appears to take at face value, is especially inappropriate. The Sheppard Subway cost nearly $1 billion when it was constructed 15 years ago. The section of the LRT between Steeles Avenue and Downtown Brampton will be built entirely on the surface, and comprise only a short section of the corridor’s entire length. It is worth repeating that the province will be funding the entire project; any deviation from Main Street would be more expensive and will cost Brampton taxpayers more.

The Hurontario-Main LRT is not only a transit project; it is a city-building exercise that will help direct investment and urban intensification in Brampton and Mississauga. The light rail project will connect three GO Station and several urban centres identified for growth, including Brampton’s Downtown Core.

San Grewal’s article is misleading, one-sided and irresponsible. I expect better from the Toronto Star.

In today’s edition of the Toronto Star, a front-page story with the headline “Brampton mayor’s LRT plan woefully short of riders” was published. The article was written by staff reporter San Grewal, who normally covers Brampton and Mississauga politics. Sadly, Grewal manages to take the case of anti-LRT politicians like Councillor John Sprovieri, who compares the Main Street alignment with the underused Sheppard Subway.

After a long special council meeting on July 8, council voted to defer a decision by six weeks on whether to proceed with the recommended Main Street surface alignment for the LRT between Steeles Avenue and the Brampton GO Station. The section north of Steeles Avenue was controversial as some local residents and businesses were concerned by additional traffic, and (in my opinion, ridiculous) heritage impacts of running a LRT through Downtown Brampton.

1. According to staff reports, the actual, maximum capacity of the Hurontario-Main LRT is 7200 passengers per hour per direction (PPHPD), if three-car trains are used. It will start with two-car trains, with a maximum capacity of 4800 PPHPD. The 450 PPHPD cited by Grewal (the assumed ridership of routes 2 and 502 on Main Street) does not count the ridership on parallel routes, such as 52 McMurchy, which may be diverted to an LRT. It also fails to take into account ridership growth on the corridor, attracted by a high-quality, rapid light rail corridor.

2. The section of the LRT under debate, three kilometres in length, is the northern extent of a much longer line; the section to Downtown Brampton makes the Hurontario-Main LRT part of a larger network, connecting an urban growth node and GO/VIA station with southern Brampton and Mississauga. The Bloor-Danforth subway is nowhere near capacity at the end of the line near Kipling or Kennedy Stations, yet they are part of an integral network.

3. Ridership has grown along the entire corridor; Brampton Transit has posted healthy ridership increases year after year that have exceeded Brampton’s population growth. The LRT will reduce the travel time by transit from Brampton GO to Port Credit GO from approximately 75 to 46 minutes; while most trips will not use the entire corridor, it does form part of a larger suburban network essential for connecting residents to employment areas throughout Brampton and Mississauga.

4. Comparing the last three kilometres of a surface LRT line to the Sheppard Subway is simply disingenuous. The Sheppard Line is a 5.5 kilometre subway line built for just under $1 billion (in 2000 dollars). The Hurontario-Main LRT will be 23 kilometres in length, will cost $1.6 billion, and fully funded by the province. Any changes to the Main Street alignment, such as other alignments will not be paid for by the province; Brampton taxpayers will be on the hook.

This is the second time San Grewal has written an article that sides with the anti-LRT councillors. On July 9, Grewal filed this story, titled “Brampton mayor accused of playing politics on LRT.” In that article, he wrote about complaints by Councillors Sprovieri and Elaine Moore that the show of support for the LRT at the July 8 the special meeting was “orchestrated” by Mayor Jeffrey.

I know many of LRT supporters in Brampton; this was certainly not the truth. But if you didn’t know better, Grewal’s reporting might make you think otherwise. The Toronto Star has two excellent transportation reporters such as Jennifer Pagliaro and Tess Kalinowski; this shoddy reporting does not look good on them nor on the Toronto Star as a whole. But it is making it harder to support this important transit corridor.

3 replies on “Updated: The Toronto Star’s shameful reporting on the Hurontario-Main LRT”

Why not just look at the HMLRT case studies…..the one that takes current ridership…..considers all of the intensification possibilities into account, takes into account the relative attractiveness of LRT over bus, and takes the modal split of various sections of the route (which are mostly sub 10% for transit) and inflates them all to around 70% and from that projects the ridership of the new LRT……and even at peak in 2031 gets a number that easily fits into what a full BRT can handle.

Why is nobody suggesting an underground section north of Nanwood to the station? Is it too costly? Does the 1.6 billion not cover that?

Tomas: The staff report (which I linked to in Point 1) specifically states that a tunnel would cost an additional $380 million; this would to be borne by the City of Brampton. It would most likely be built as a “cut and cover” tunnel, which would disrupt Main Street residents and businesses far more than a cheaper surface LRT. The costs might even be higher as we’ve seen cost overruns on other large transit projects in Toronto and elsewhere; complicating things further is that it would follow the old bed of Etobicoke Creek north of St. Mary’s Church.