Two weeks ago, I was out exploring Durham Region, the eastern end of the Greater Toronto Area. While south Durham Region is mostly made up of generic suburban sprawl, there are some interesting historic villages and new urbanist neighbourhoods. North of Highway 7, Durham Region is still mostly rural, though plans for a new airport in North Pickering may change that.

Sadly, Durham Region remains auto-centric in its outlook, even more so than other suburbs to the north and west of Toronto. The provincial government is constructing an eastern extension of Highway 407, with two new connecting highways to Highway 401 either nearly complete, or proposed. Oshawa, the largest city in Durham, is the birthplace of General Motors Canada, but while the auto industry declines, the city has been continuing to make many civic planning mistakes. And in Ajax, a small symbol of change – new bus and bicycle lanes – is still merely a token effort.

Pickering Village, located just off Kingston Road, is a an interesting geographic oddity: the historic village, incorporated in 1953, was joined with the Town of Ajax, instead of the City of Pickering itself when Durham Region was established in 1974 as the Province created regional municipalities throughout Southern Ontario. The heritage buildings in the village centre were mostly preserved as Kingston Road (Highway 2) was diverted around it in the 1950s. I wrote more about Pickering Village here. 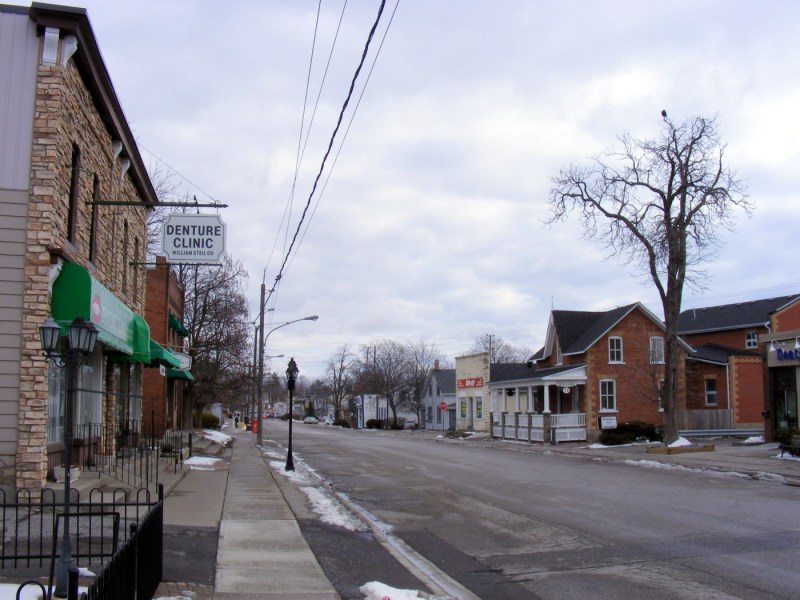 Oshawa’s downtown doesn’t have much going for it, and has been the victim of some unfortunate mistakes in the last few decades. The University of Ontario Institute of Technology, the province’s newest post-secondary institution, is a boon for Oshawa, but it was unfortunately located in the northern outskirts.  Local land use planning has also suffered. Just east of Downtown sat the old McLaughlin-Buick/General Motors plants; this was the site of important Canadian industrial and labour history. There was a famous 1937 strike here in which auto workers made important gains, despite the efforts of Premier Mitch Hepburn, who brought out strikebreakers (known as “Sons of Mitch’s”). General Motors later moved the assembly lines to modern plans south of Highway 401, but kept the historic factory as a fabrication plant, before it closed and demolished. Today, much of the site remains vacant, but big-box retail (including as a giant Costco store and gas bar) has taken up a large part of it; only a GM auto dealership remains as a discreet reminder of the area’s history.

Wouldn’t have this large parcel of land, right next to Downtown Oshawa, been an ideal location for a university campus? Instead, auto-centric big box retail occupies the site. Maybe that’s a fitting legacy, considering how Sam McLaughlin’s carriage company helped to foster a car culture in this country. As General Motors cuts back production in Canada, and the high-wage, low-skill union jobs disappear, perhaps vacant brownfields, parking lots and low-wage retail work is some sort of urban poetic justice; there’s a great irony of banishing a university (and its often-car-less students) to the suburbs while building a Costco downtown. 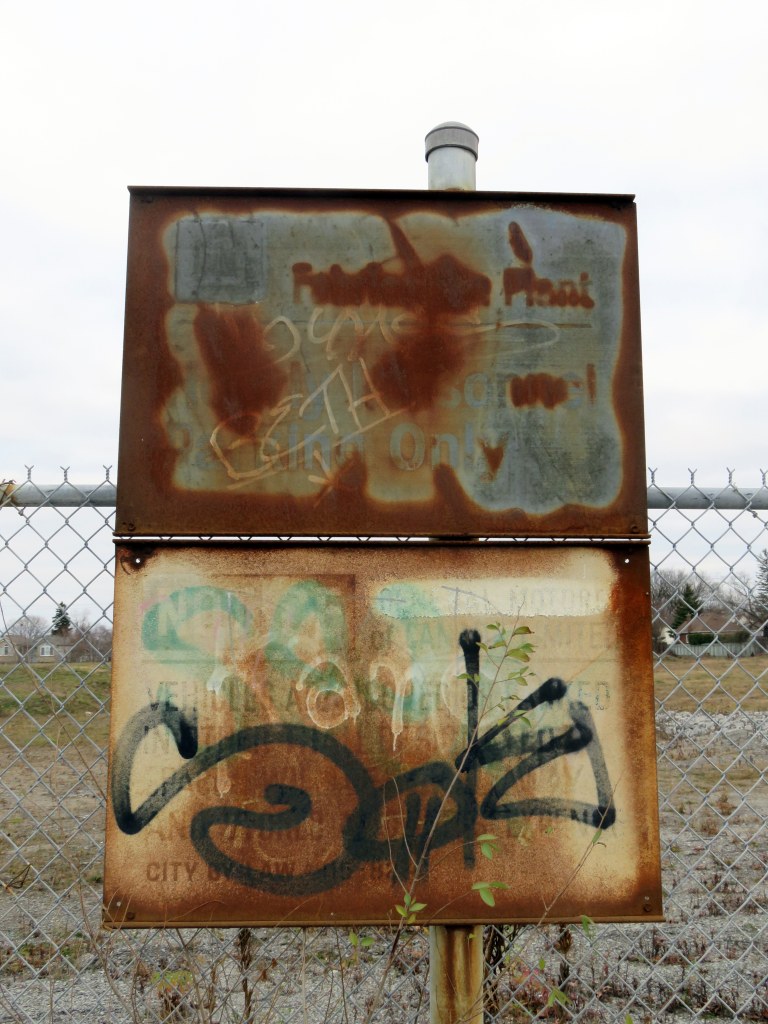 This rusted-out sign, posted at a vacant parking lot, is one of the only reminders of General Motors Canada’s historic operations at Oshawa

That said, despite Oshawa’s mistakes, there are some positive developments here, such as a downtown arena (the GM Centre), which hosts the local Ontario Hockey League team, the Oshawa Generals; even UOIT has located some of its teaching spaces here. Downtown Oshawa has a long way to go before coming a vibrant, attractive place to be, but there are some encouraging signs of change. 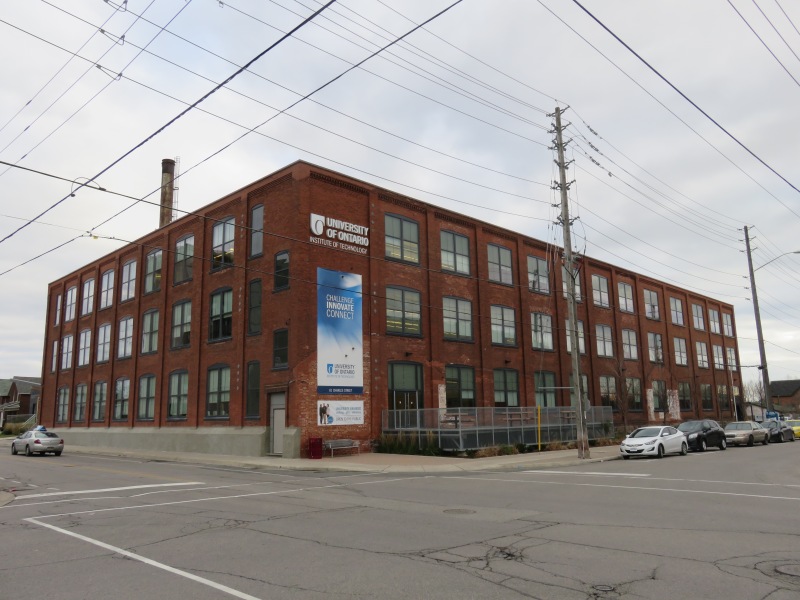 UOIT has taken over an old factory in Downtown Oshawa. If only UOIT located its entire campus here when established over a decade ago.

In Ajax, on a 1.1 kilometre stretch of Kingston Road, there are new bus and bike lanes along a busy suburban corridor, part of a greater plan to implement bus rapid transit along the Highway 2 corridor (known as Dundas Street in Whitby, and King and Bond Streets in Oshawa). Durham Region Transit introduced Pulse, a separately-branded bus service to operate along this corridor. 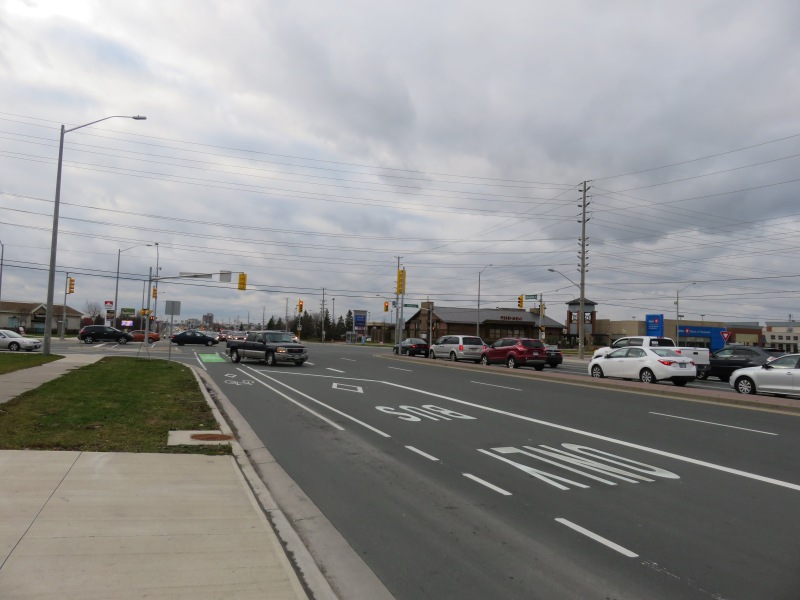 New bus and bike lanes in Ajax, at Kingston and Salem Roads.

But I found myself unimpressed. The new bike and bus lanes don’t yet connect to any other transit or cycling infrastructure; the surrounding land uses include only shopping plazas, more big-box retail fronting massive parking lots, and the backyards of single-family houses, hardly an environment conducive to transit and active transportation. There are no buffers, never mind barriers for the bike lanes, even though this is a major, high-speed suburban arterial.

One might expect that DRT Pulse would be comparable to other Toronto-area “BRT-lite” services such as Viva in York Region and Zum in Brampton. But in Brampton, Zum buses on Main and Queen Streets operate every 7-15 minutes at most times of the day (every 20 on Main Street on Sunday), but Pulse, the supposed transit backbone of Durham Region, runs only every 30-60 minutes on evenings and Sundays; and it makes all local stops. Maybe it should be called DRT Flatline. I’m not sure why a bus service with such poor frequencies needs a dedicated lane.

Yes, there are examples of good urban planning in Toronto’s suburbs; but then there are one-offs like bike and bus lanes Kingston Road that might look good on paper, a check-mark to cross off on a list of “urban” things to have. But without a bigger plan, a true commitment to urban intensification and placemaking, the check-marks mean little. 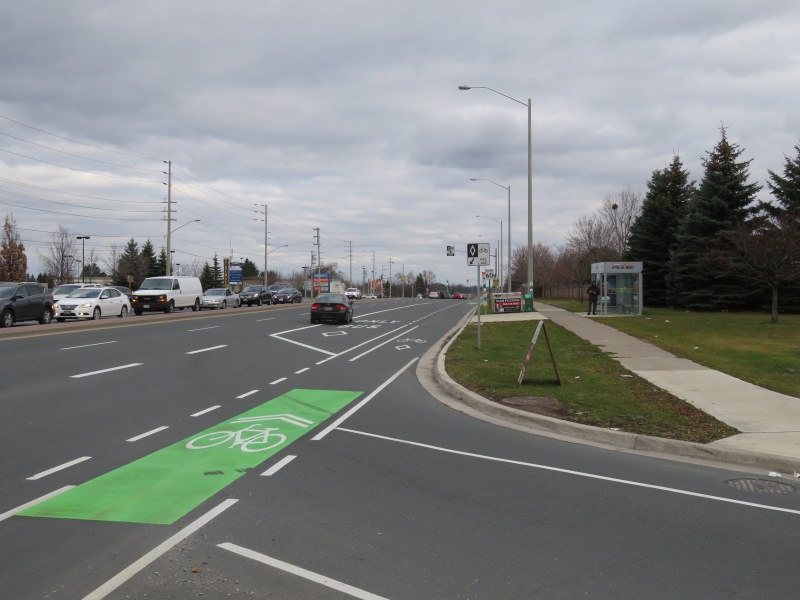 On December 6, 2014, I started this blog. At first, I wanted a place to host the maps from the 2014 municipal elections, but I had no idea what I would end up doing with it. Since then, I’ve delved into politics, transit, even travelogues from my day trips or overnight bike rides. I want to thank you for following along, and I look forward to an interesting 2016.