Toronto can do better for cyclists at construction sites

For years, cyclists in Toronto have not been getting enough respect. In 2011, City Council voted to remove bike lanes on three streets — Jarvis Street, Pharmacy Avenue, and Birchmount Avenue. Major off-road cycling routes are closed for months or years at a time, while additional funds are found to accelerate road closures and construction on the Gardiner Expressway. Mayor Tory is committed to spending $1 billion to maintain the eastern section of the Gardiner, despite low traffic volumes and lost opportunities for the revitalization of the eastern Harbourfront. Yet funding for a comprehensive grid of safe cycling routes remains hard to come by.

There have been some positive news, however. The new Bloor Street bike lanes — officially a pilot project — between Avenue Road and Shaw Street were recommended for retention by the Public Works and Infrastructure Committee this month. New bike lanes were added on Woodbine Avenue this year. And the Toronto Police Services’ parking enforcement officers have been targeting cars and trucks stopped in bike lanes.

But one problem that still needs to be addressed is proper messaging at construction sites where bike lanes or general-traffic curb lanes are closed for construction. Too often, cyclists are told to dismount and walk their bikes, despite their status as vehicles, entitled to use the road as any other vehicle. (There are, of course, exceptions such as freeways and some high-speed roads where pedestrians and cyclists are expressly not permitted.)

For example, cyclists heading west from Danforth Avenue over the Prince Edward Viaduct were greeted with a sign reading “bicycle lane closed – cyclists dismount and use sidewalk.” Next to that sign was a “sidewalk closed” sign, directing pedestrians to the south side of the viaduct.

The Ontario Highway Traffic Act says that cyclists are to ride as close to the right of the roadway as practicable. But this does not necessarily mean cyclists must ride right next to the curb either, especially if there are blockages, debris, or other hazards. Motorists must also pass cyclists at a distance of at least one metre, and must wait for a safe opportunity to pass.

147 (1) Any vehicle travelling upon a roadway at less than the normal speed of traffic at that time and place shall, where practicable, be driven in the right-hand lane then available for traffic or as close as practicable to the right hand curb or edge of the roadway.  R.S.O. 1990, c. H.8, s. 147 (1).

(6.1) Every person in charge of a motor vehicle on a highway who is overtaking a person travelling on a bicycle shall, as nearly as may be practicable, leave a distance of not less than one metre between the bicycle and the motor vehicle and shall maintain that distance until safely past the bicycle. 2015, c. 14, s. 42.

After several complaints, new signage directing cyclists and motorists to yield and share the lane was installed on Danforth Avenue approaching the viaduct.

On Yonge Street, where construction between Wellington and Richmond Streets has reduced the road to two lanes, “cyclists dismount” signs have appeared as well. While this part of Yonge does not have bike lanes, the signage is still wrong. Cyclists have the same right to take the lane. I complained to a construction worker nearby after spotting these signs, who complained about cyclists riding through anyway, not getting my point.

Signs telling cyclists to dismount are generally ignored, like those on multi-use paths in suburban Toronto. They’re placed at intersections and at narrow pinch-points for safety (drivers not expecting cyclists to cross; conflicts with pedestrians on sidewalks), but they are poor substitutes for solutions such as traffic calming, painted cross-rides at road crossings, and gentler, more effective measures to slow fast-moving cyclists, such as speed humps and barriers where necessary. At construction sites, it is far better to remind motorists to yield to cyclists and share the road, than expect cyclists to get off their bikes and walk around the construction zone. That said, “cyclists dismount” signs and enforcement is necessary and useful in pedestrianized zones, such as street festivals and pedestrian malls.

Signage telling cyclists to dismount at construction areas is lazy, de-legitimatizes cycling, and sends the wrong message to motorists. I hear enough complaints about “cyclists who break all the rules.”

At a construction site on Simcoe Street, confusing signage and a poorly marked diversion endangered northbound cyclists, forced out of the separated northbound lane and into oncoming traffic. This resulted in at least one close call.

On a recent visit to Chicago, I came across a sign that delivers the right message. It read: “bike lane closed ahead — shared lane — yield to bikes.” The large orange sign was mounted in the road, in a way that it would be seen by motorists. It also makes it very clear that cyclists not only have the right to use the general traffic lane, it also makes it clear that motorists must give way to cyclists detouring around the closed bike lane. Toronto would do well to follow this example.

The City needs to develop mandatory standards for bike lane and curb lane blockages, in order to reduce confusion, as well as promote the safety and legitimacy of cycling in this city. It must also enforce those standards vigorously. 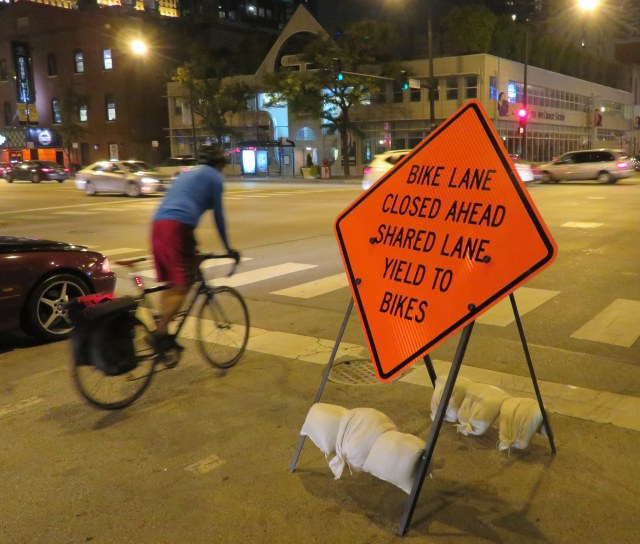 This entry was posted in Cycling, Roads and tagged Chicago, Construction, Cycling, Toronto. Bookmark the permalink.