Previously on this blog, I wrote about Shoppers World Brampton, a shopping mall that slowly declined despite being located in a high-growth suburban city. I wrote that RioCan Real Estate Investment Trust (REIT), the owners of the mall, were interested in developing the property by reducing the retail footprint and adding new residential uses. Some of those details have now been revealed.

Shoppers World opened in 1969, on the outskirts of the Town of Brampton, which was transitioning from a county service centre and industrial town to a suburb of Toronto. The mall expanded twice: once in 1973-74, and again in 1980-81.

It was where I got my first paying gig: returning stray shopping carts to K-Mart for a few dollars apiece. I lived within walking distance of the mall, though I joked that the best thing about it was the bus to Square One.

But many of those national retailers left by the mid-1990s. Square One, a 15 minute drive south, was expanding, and Bramalea City Centre had renovated and expanded as well. But when RioCan REIT purchased Shoppers World in the late 1990s, it made some long-needed improvements, including new flooring over the old terrazzo, a new food court, and removing some of the dead retail space for new big-box retailers like Canadian Tire, Staples, and Winners. When The Bay (successor to Simpson’s) closed, it was replaced by more exterior retail.

Meanwhile, Zellers replaced K-Mart, and briefly became a Target store during the American company’s disastrous foray in the Canadian market. Rio-Can carved that into spaces for smaller retailers, including Giant Tiger. Finally, the bus terminal moved, from a distant corner facing Steeles Avenue, to a central location right at the corner of Main Street and Steeles Avenue, designed for easy transfers to the Hurontario LRT. 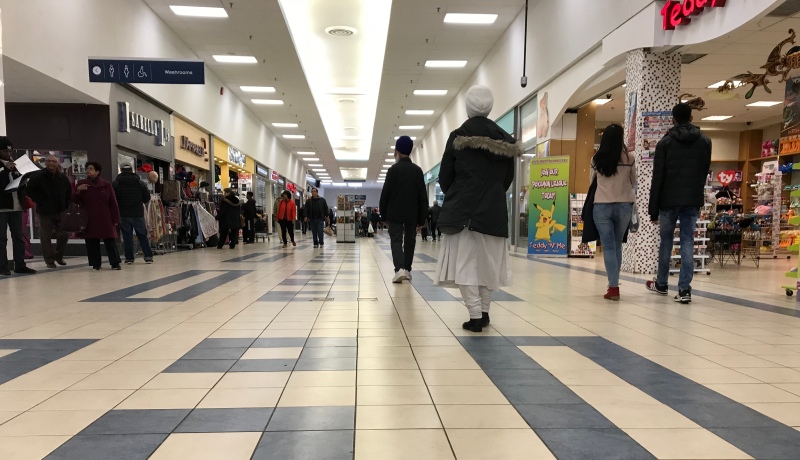 The interior of the mall is still busy, but nearly all chains let their leases expire, with independent retailers taking over. Even so, there are many vacant storefronts.

Earlier in October, RioCan submitted their plans to the City of Brampton, and were also presented at an open house at the mall on October 22, 2019. The redevelopment proposal includes new roads, residential towers with at-grade retail, underground parking, among other features.

Details from RioCan’s submission include: 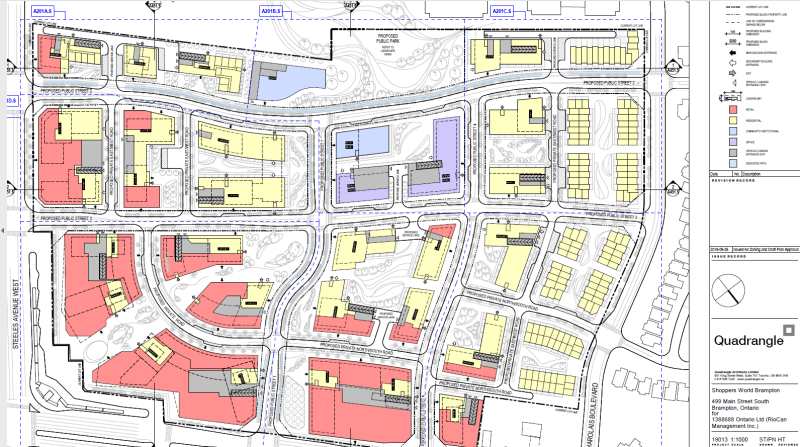 Site plan from RioCan’s submissions to the City of Brampton. Click to enlarge.

The first phase of the redevelopment will be 27-storey tower on the southwest corner of the site (where the abandoned Brampton Transit terminal now sits). This will be constructed before the mall itself is touched. Further phases will see the mall slowly demolished, though they are dependent on market conditions.

RioCan hired Quadrangle and SvN architects to develop conceptual renderings for the development, indicating that RioCan is serious about this development. Given the City of Brampton’s own plans for urbanizing this part of the city, I am optimistic this will be built. The area already has good public transit access, with Zum express bus service to Downtown Brampton, Mississauga City Centre, Sheridan and Humber Colleges, as well as local service. This will also be at the terminus of the Hurontario LRT line (construction will begin shortly as the contract was just awarded), which may yet continue to Downtown Brampton.

This is the largest shopping mall redevelopment in the Greater Toronto Area, following work now underway at the Galleria Mall in Toronto, and proposed for the Promenade Mall in Vaughan (though much of that mall’s structure will remain intact). As the mid-market gets squeezed by discounters, internet shopping, and high-end shopping centres, more malls of Shoppers World’s size will see similar development.

I was surprised to see such urbanity proposed for suburban Brampton, but it may finally be the time for the Flower City to bloom. Despite my nostalgia for Shoppers World, I am excited for its future. 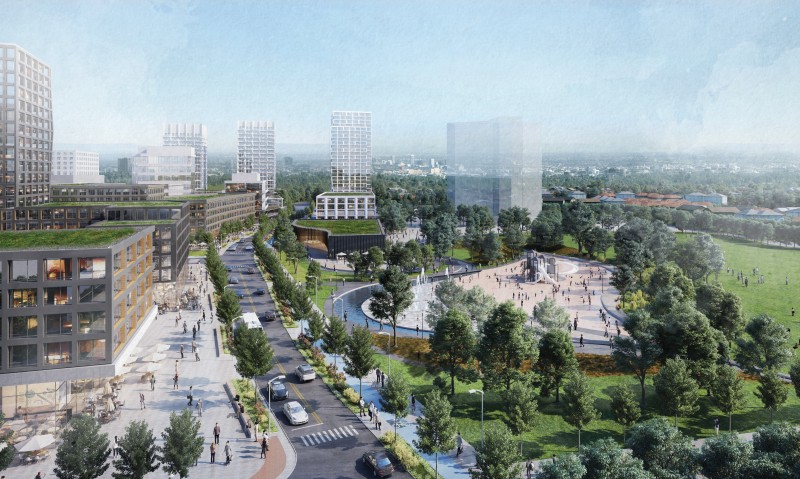 Looking south on Mill Street towards the park expansion and Steeles Avenue. The first phase tower is shown in the middle background.

One reply on “The death and life of Shoppers World Brampton”

I see the tremendous growth in the G.T.A. and all the planned redevelopments of Malls, Shoppers World , Meadowvale Town Centre , Cloverdale , etc. etc. I just keep thinking in the effort to draw out all the potential of these sites the developers have erased all the history and character of these areas, While you have to embrace change in life myself and a lot of other people I’m sure can’t see the vision!!!! I can’t help think that over in the U.K. and Europe
they value what’s gone before more than they do here in North America!!!! It’s so easy to bulldoze everything and start afresh , rather than selectively utilizing some of the best aspects of the existing concepts and build on them – that’s really hard!!!!! I’m not an Urban Planner but I do think it would be nice to embrace and celebrate these very vital places by paying homage to what has gone before!!!! I wonder what the residents of Peel Village feel about this intensification of this area right on their doorstep!!!!!