The long way to Pembroke

Greyhound’s Peterborough-Pembroke route only operates a few days a week, on Friday, Saturday, and Sunday. It is one of the last rural bus routes operated by Greyhound Canada as most remaining routes operate on highways between large urban centres. The bus follows Highways 28, 62, and 60, stopping at small towns such as Bancroft, Maynooth and Barry’s Bay. North of Lakefield, the route passes through the Canadian Shield, with its lakes, rocks, and trees.

As I traveled on last Friday in September, the fall colours were almost at their peak in the Haliburton Highlands, making this an especially scenic ride. There was an informal fifteen-minute stop in Barry’s Bay, enough time to get a decent coffee and a snack.

The view from Highway 28 near Bancroft, September 27

At Bancroft, we passed by the old Central Ontario Railway Station. Passenger service ended in the 1950s, while the tracks were torn up in the 1980s. The station was preserved and is now a local museum. In front, a dozen citizens took part in a local climate strike that took place across Canada, part of the Global Week for Future. It was nice to see residents take part, even in small town Ontario. 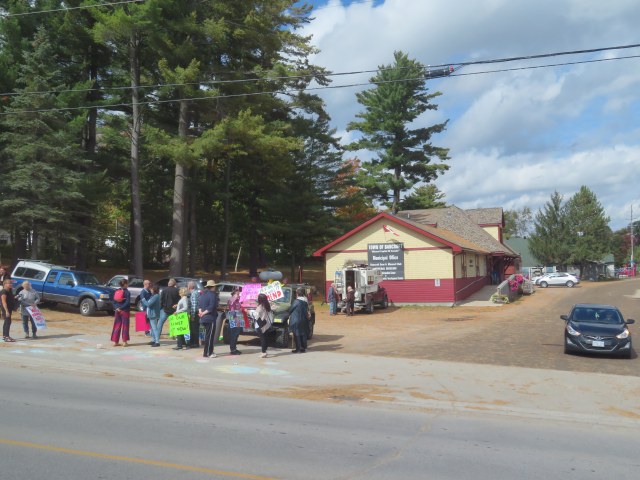 Climate strikers in Bancroft. The former railway station stands behind

At Pembroke, I had several hours before the Ontario Northland bus departed for Ottawa. While Pembroke’s downtown core could use some TLC, it has great bones and a great collection of heritage buildings, including a late Victorian post office, its late Art Moderne replacement, the historic Renfrew County courthouse, solid commercial blocks, and a fascinating library. 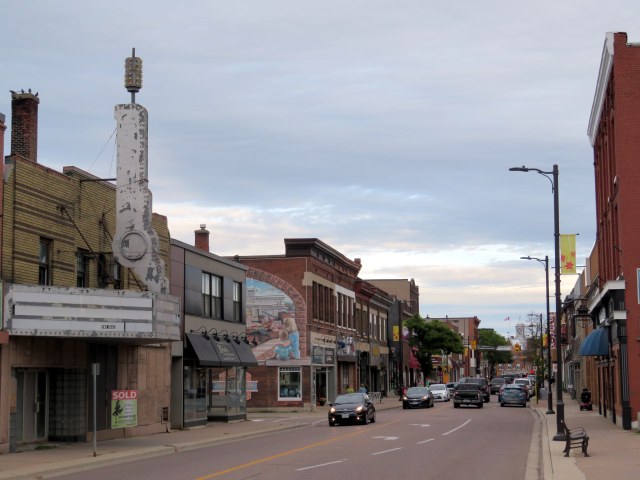 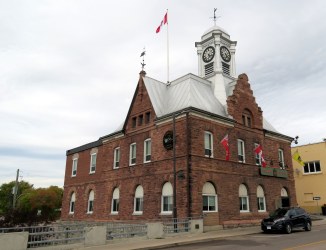 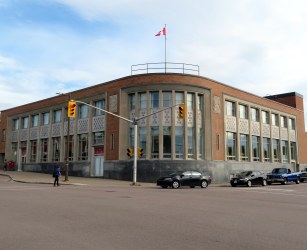 Pembroke’s public library is especially unique, as it looks like it could have been designed by Frank Lloyd Wright. Built in 1914, it was designed by Francis Conroy Sullivan, a Canadian-born architect who studied under Wright in Chicago before establishing his firm in Ottawa. Expansions and renovations have remained faithful to the Prairie Style architecture.

Entrance to the Pembroke Public Library

Though Pembroke was served by three different railways — the Canadian Pacific transcontinental mainline, a branch of the Canada Atlantic that operated between Montreal and Parry Sound, and the Canadian Northern — all tracks were removed by 2013, when Canadian National ripped up the Beachburg Subdivision. None of the station buildings survive, but the abandoned rights-of-way are still intact. At the west end of town, a long trestle now carries a snowmobile trail where the CN mainline once crossed the Indian River.

The removal of the CN and CP routes through the Ottawa Valley were especially unfortunate, as all through freight and passenger traffic across Canada must now pass through Greater Toronto. This was the result of cost-cutting and the loss of local rail customers, such as lumber and pulp industries. The Commonwealth Plywood plant in Pembroke still stands as a reminder of the industrial past of the Upper Ottawa Valley.

The last passenger train, VIA’s Canadian, called at Pembroke in 1990. But there are two daily bus trips in each direction between Ottawa and North Bay/Sudbury, one operated by Greyhound, the other by Ontario Northland. From Pembroke, I was able to take a Northland bus that left at 9:00 PM, arriving in Ottawa by 11:00 PM. This gave me plenty of time for dinner after a long walk around town.

My trip to Pembroke made for a pleasant detour, giving me a chance to see another part of Ontario.