I was recently browsing Urban Toronto‘s forums (a great resource if you’re interested in keeping up with construction updates and development proposals here in Toronto), when I came across a post written by “AlvinofDiaspar” in a thread discussing SmartTrack.

Alvin’s post linked to an interesting report written by the Strategic Regional Research Alliance, a consulting group based in Toronto that I had never heard of until recently. The report, entitled “The Strategic Case for the Regional Relief Line,” was published in October 2013, just before the mayoral race began for the 2014 election.

John Tory unveiled his “SmartTrack” plan, promising a “London-Style surface rail subway” (whatever that meant), on May 26, 2014. The transit service, using frequent, electric multiple unit trains (like those used for commuter/regional transport in many European cities) would mostly follow existing railway corridors from Markham to Mississauga, via Union Station.

To the west, the line would follow GO’s Kitchener Line from Union Station as far as Mount Dennis (Eglinton Avenue, near the western terminus of phase one of the Eglinton-Crosstown LRT), with stops at Spadina, Liberty Village, the existing GO/UP Express station at Bloor, and at St. Clair Avenue. At Mount Dennis, the SmartTrack corridor follows a routing via Eglinton Avenue into Mississauga’s Airport Corporate Centre office district, which of course has no existing rail infrastructure to capitalize on.

Tory promised to have SmartTrack operational in seven years, by 2021, putting other approved and/or proposed transit projects (the Downtown Relief Line, the Sheppard East and Finch West LRTs, among other plans) on the back burner. 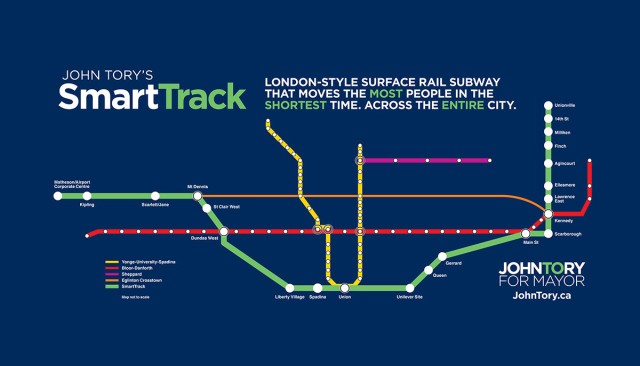 Back in 2014, transit observers were taken aback by this new “bold” transit idea (John Tory kept using that word to describe SmartTrack), as his campaign had recently taunted Olivia Chow’s hesitancy to prioritize the Downtown Relief Line (DRL) in her transit platform. At the time, Chow, the presumed front runner in the mayoral race in April 2014, promised to increase TTC bus service and build the Scarborough LRT while planning for the DRL continued.

The DRL is a long-proposed subway line under review by the City of Toronto and by Metrolinx that would connect downtown Toronto to the Bloor-Danforth Line east of the Don River, thus relieving the the Bloor-Yonge subway interchange from overcrowding, while offering improved transit access to east end Toronto, and addressing overcrowding on Yonge subway trains. Further extensions to the north, towards Thorncliffe Park, Flemingdon Park and Don Mills, would re-direct many current and potential transit riders from the Yonge Subway, allowing for an extension of that line from Finch to Richmond Hill.

But to some degree, Tory’s promise of frequent, regional electric rail on GO’s corridors dovetailed with provincial plans for electrification of part of GO’s services and the Airport Rail Line (now branded as the Union Pearson Express). Improved services on GO’s corridors, if paired with fare integration with local transit (GO’s fares are very expensive for short trips), would provide useful rapid transit to many areas not served by the subway, and could provide some relief to the existing subway network. John Tory was endorsed by many provincial cabinet ministers; it appeared that he had the support of the Liberal government itself, though Premier Kathleen Wynne never endorsed any mayoral candidate directly.

The only hint of this SRRA report that I could find in the mainstream media was in an interesting article written by Tess Kalinowski, the transportation reporter at the Toronto Star after Tory’s win on October 27, 2014. In an article published on November 17, entitled “The evolution of SmartTrack,” a report entitled “The Business Case for the Regional Relief Line” was mentioned. Also mentioned in the article was John Duffy, a political strategist who worked on the provincial Liberal leadership campaign of former transportation minister (now environmental minister) Glen Murray, and had ties to Wynne’s leadership and election campaigns. Kalinowski wrote that Duffy also was acquainted with Iain Dobson, a property developer and Metrolinx board member. Other people involved in putting SmartTrack together and mentioned in the article were the Canadian Urban Institute’s Glenn Miller (who is listed as a SRRA contact on its website, as is Iain Dobson, a real estate executive and Metrolinx board member), former Toronto chief planner Paul Bedford and businesswoman and urban expert Anne Golden.

Transit advocate and friend Steve Munro picked up on this report before I had – you can read his posts which are more detailed and far better than my short analysis in this post:

It’s unfortunate that John Tory decided to make this concept the centrepiece of his transit platform. Easily, the biggest flaw, mentioned by others, including Steve Munro and mayoral rival Olivia Chow, is the Eglinton section between Mount Dennis and the Airport Corporate Centre. The corridor already had a proposed rail transit project, the western leg of the Eglinton-Crosstown LRT line, a project first proposed in 2007 as part of a larger city-wide LRT plan known as Transit City, and confirmed in 2009 when the provincial government announced funding for it and three other LRT lines. (In 2010, funding was deferred for the section west of Weston Road). The once-available right-of-way that would have allowed for a surface-running heavy rail transit project was already disappearing.

But in the SRRA-authored report, we see why Tory went along with the problematic Eglinton routing, rather than having SmartTrack continuing along the GO Kitchener/UP Express corridor towards the transit desert of northwest Toronto. It was part of a larger plan to connect suburban office parks to Downtown Toronto.

The Regional Relief Line, as envisioned by the SRRA, would have included a third phase, from the Airport Corporate Centre to Meadowvale Business Park, another large, although sprawling, employment centre near Highway 401 and Mississauga Road. The “Phase Three” of this proposed regional rail route would follow Highway 401 on a new alignment.

The map from the SRRA report, published on page 4. Note the use of Google Maps to create the map.

The SRRA planning exercise appears to be one where well-educated planning experts were engaged in a game of “connect the dots.” Sure, the Regional Relief Line connected several major employment nodes in Markham, Toronto, and Mississauga, with the nodes in Mississauga lined up along Highway 401. But this error on page 6 of the report makes me wonder how many of the facts and assumptions the authors simply got wrong or didn’t fact-check:

This phase will take a little longer to complete than the Markham phase because there are no tracks on the section from Mt Denis to the Airport Corporate Centre. This right of way will take longer to design and obtain approval in an EA process. It is owned by the Province and was intended to be an expressway. There is ample room for the dedicated right of way.

In fact, the Richview Corridor, the right of way mentioned, was owned by the city, not the province, reserved in the 1960s for an expressway linking Highways 401 and 427 to the proposed Highway 400 extension, part of a much larger highway plan for Metropolitan Toronto. The 400 extension was cancelled and the at-grade Black Creek Drive was built instead; the Richview lands along Eglinton Avenue West in Etobicoke remained dormant for decades. But in 2011, the city started selling off the land for residential development, making the right of way unusable for any transportation corridor. (This did not matter in plans for the Eglinton-Crosstown LRT connection to the airport; there was still room to build a median LRT corridor along this section.) In 2013, pre-eminent local transit and planning experts should have been aware of this development and be able to identify the proper owner of this former right of way.

It also strikes me as a little backwards looking to link auto-dependent office parks together with a new transit line, especially without a detailed origin-destination study. Shouldn’t urban planners be promoting dense urban employment clusters in areas well-served or potentially well-served by transit? Does it make sense to build expensive transit lines to serve low-density office complexes that come with large parking lots and garages, such as those in Mississauga’s Airport Corporate Centre? Or am I confused?

In December 2014, mere weeks after Tory’s election, Council voted 42-1 to accelerate the work plan for the rail line, awarding up to $750,000 for early analysis and modelling work. The consultants awarded the funds? A group from the University of Toronto and Strategic Regional Research Associates. In February, council approved an additional $1.65-million towards studying SmartTrack, at least taking a closer look at the Eglinton West section of the corridor.

To me, it seems just a little bit odd that Tory’s campaign advisers were awarded this contract to study a project, that until Tory’s election, wasn’t even on any transit planning maps. Steve Munro picked up on this as well, questioning whether  Iain Dobson, a member of the Metrolinx Board, has a conflict of interest due to his involvement with the SRRA and a member of the Advisory Board to the University of Toronto Transportation Research Institute. After all, Metrolinx is supposed to be the expert, disinterested provincial agency charged with evaluating and implementing various transit plans. Meanwhile, the need for a Downtown Relief Line hasn’t gone away.

Tory and his connections in academia and the private sector have managed to change the course of Toronto’s short-term transit planning, and I can’t help but feel a bit suspicious of the behind-the-scenes planning that went into SmartTrack. This is a story very much worth following.

1 Response to The genesis of Mayor John Tory’s SmartTrack