Updated with a link and discussion of the Scarborough Transit Planning Update, released earlier today.

It’s been an eventful few days for transit watchers. Late last week, we found out that John Tory’s SmartTrack plan will be clipped to an initial phase between Mount Dennis and Kennedy Station, and the Eglinton-Crosstown extended in the west to the Airport Corporate Centre and probably Pearson Airport itself. The section north from Kennedy Station to Unionville Station in Markham has been deferred to a later Phase II. And the announcement of a preferred alignment to the Gardiner East “Hybrid” was announced on Tuesday.

Back in December, 2014, I suggested that there was no need for the Scarborough Subway extension, and that a good transit plan had already been developed in the last ten years. A combination of the Scarborough RT replacement and extension to Malvern, the Transit City light rail plan, and GO Transit Regional Express Rail (RER) would have served the eastern part of Toronto quite well.

But then, in 2010, Toronto elected Rob Ford as mayor, who ran on a transportation platform of “subways, subways, subways” and ending the so-called “war on the car.” The Scarborough RT replacement was dropped in favour of a subway, planning and construction work on the Finch and Sheppard East LRT routes was suspended, and the TTC surface network was cut back. For a while, it looked like maybe the Scarborough LRT line would be resurrected. But then municipal and provincial politicians, looking for votes, pushed the more expensive and shorter subway option. Candidates in a by-election in Scarborough-Guildwood all claimed to be “subway champions,” even the NDP’s Adam Giambrone, the TTC Chair at the time Mayor David Miller put forward the seven-line Transit City LRT plan. The three-stop Scarborough Subway extension would cost over $3.5 billion.

John Tory, who won the 2014 mayoral election, ran on a platform that included “SmartTrack,” a single-line regional rail concept that he claimed would provide relief to the Yonge Subway, completed by 2021. Tory’s campaign claimed that SmartTrack would carry  200,000 riders a day, and be fully integrated with the TTC, including fares. Tory also promised not to re-open the Scarborough LRT vs. subway debate, committing himself to the three-stop subway. Tory never showed much commitment to the Finch West and Sheppard East LRTs, which were funded by the province, but left dormant.

The trouble with committing to SmartTrack and the Scarborough Subway was having two new parallel transit lines three kilometres from each other between Eglinton and Sheppard Avenues, as depicted in the map below. The Eglinton-Crosstown LRT, currently under construction, the Bloor-Danforth Subway and the SmartTrack line would intersect at Kennedy Station. 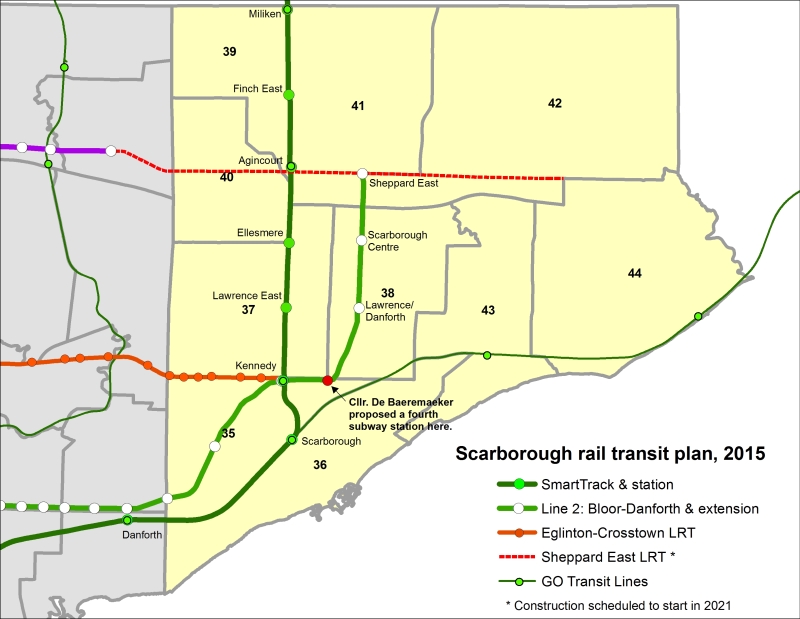 Active rail transit proposals in Scarborough, as of 2015

But on Wednesday, January 20, Oliver Moore and Marcus Gee at the Globe and Mail and Tess Kalinowski at the Toronto Star broke news on a City of Toronto planning report that would re-allocate part of that $3.5 billion from the subway to extending the Eglinton-Crosstown line to the University of Toronto’s Scarborough Campus (UTSC), and reducing the number of stops on the subway from three (excluding Councillor Glenn De Baeremaeker’s proposal for a fourth) to one. The subway, therefore, would run five or six kilometres, non-stop, between Scarborough Centre and Kennedy. The 12-kilometre, 17-stop extension of the Eglinton-Crosstown line resurrects most of the proposed, but unfunded Scarborough-Malvern LRT.

I created this map below based on a map tweeted by the Star’s Tess Kalinowski on Wednesday afternoon: 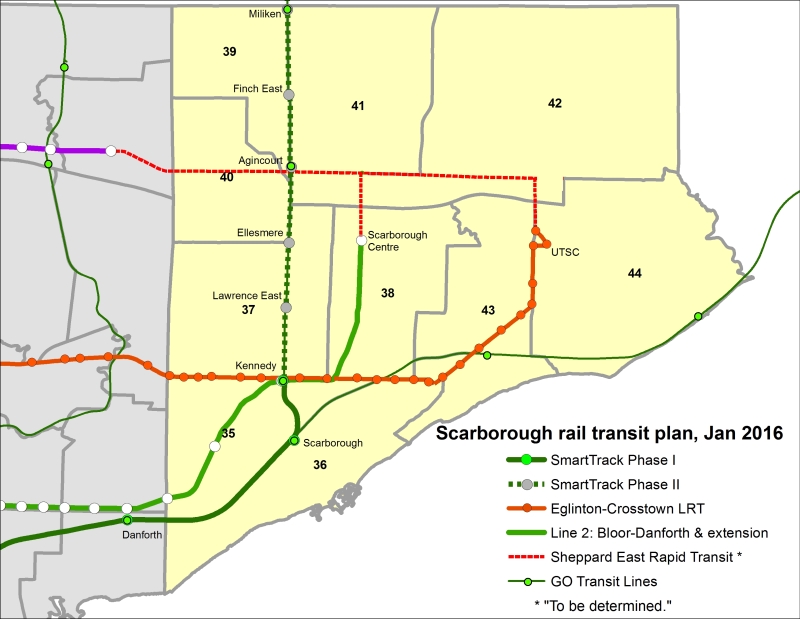 The Latest plan for Scarborough, including the one-stop subway extension and the additional 17 stops planned for the Eglinton-Crosstown LRT, as well as SmartTrack Phases I and II, as recommended in a separate study.

It’s worth noting that the Sheppard East LRT, which won’t start construction until 2021 (essentially leaving it in limbo) is marked on the staff report map as “rapid transit to be determined.” Maybe it will connect to the subway at Scarborough Town Centre. Maybe it will connect to the Eglinton-Crosstown. Maybe it will remain a bus route. In the original Transit City plan, Sheppard East was to be started first; indeed construction did start on the Sheppard Avenue rail underpass at Agincourt GO Station; an empty median is where the LRT tracks are planned to go. The Scarborough-Malvern LRT was supposed to continue north of UTSC to Sheppard Avenue (and potentially further north along Morningside), but this isn’t part of this latest study.

Transit City planned for a LRT maintenance and storage facility (MSF) on Sheppard East at Conlins Road, near Morningside Avenue. The Conlins MSF would have served three routes: the Sheppard East LRT, the Scarborough RT replacement, and the Scarborough-Malvern LRT. The MSF has been scaled back due to the deferral or cancellation of the other two lines, but will be essential if this latest plan goes through. So the ECLRT is built to UTSC, a rail connection from Sheppard will probably be necessary, and maybe the Sheppard and Crosstown lines were converge here.

What makes the least sense for me is the long, non-stop section of the subway between Kennedy and Scarborough Centre. There was clearly a problem of having two prioritized high-capacity rail proposals serving similar markets: SmartTrack, and the Scarborough subway extension both championed by the mayor. Cutting out the Sheppard and Lawrence stops delivers passengers to SmartTrack. That is, of course, SmartTrack makes it north of Kennedy Station.

A separate study by Metrolinx staff, recommending a shorter SmartTrack line between Mount Dennis and Kennedy, along with a western extension of the Eglinton-Crosstown LRT,  was reported in the Globe and Mail last Friday, with the Unionville-Markham section part of a later Phase II. It appears that the City-led Scarborough Transit Planning Study is assuming a full build-out of SmartTrack, at least on the east end.

I’m happy, though, to see LRT seriously considered as a solution for intermediate transit needs. What I find somewhat ironic, though, is that the Eglinton-Crosstown LRT is becoming what SmartTrack was eighteen months ago: a single line that solves all transit planning problems. Of course, my wish is to go back to building the Scarborough LRT extension, the original Scarborough-Malvern line, and letting Metrolinx and GO Transit do their thing with implementing RER.

This is why improving the local transit network – be it streetcars or buses – is so important. We’re often fixated on moving commuters long distances, but we never pay enough attention to short-distance commuters as well. For all the “subways, subways, subways” hot air we’re still hearing from some Scarborough councillors, most of their transit-riding constituents rely on buses. As a friend pointed out, since most of those local trips are by car, we need to ask whether this new plan will make transit more competitive for trips within Scarborough.

Will we see yet another proposal for Scarborough? I bet we will. Maybe SmartTrack could be routed to a spur to Scarborough Centre (has anyone looked at that?). But at some point, fatigue will set in, and we’ll have to pick something – anything – and build it in order to avoid looking indecisive. But I believe that these planned revisions to SmartTrack, LRT, and the Scarborough subway are steps in the right direction.

2 replies on “Yet another transit plan for Scarborough (Updated)”

Great map – but I think you should add a key element of the one in the photo, which is the LRT connecting with the Lakeshore GO (future RER) line in two locations. That will be really useful for creating a rapid route to downtown for people along the LRT route. It should also be a priority for city planning and Metrolinx to create intensification hubs with services and residents who can walk to transit.

Hi Dylan, good point. We’re so focused on SmartTrack that it’s easy forget about the rest of the GO Regional Rail network. Guildwood in particular can be better designed as a transit hub – the walk from Kingston Road to the station itself is through a hostile GO Transit parking lot. I’ve of course spoke about GO Transit parking earlier!