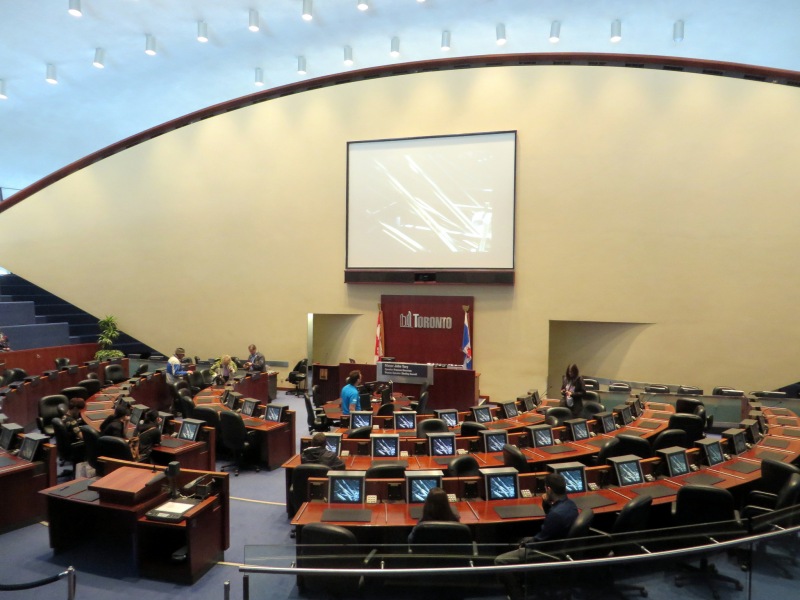 September 10, 2018
This morning, the Ontario Superior Court ruled against Bill 5, finding that the bill  “substantially interfered with the municipal candidate’s freedom of expression that is guaranteed under [Section 2(b) of the Charter of Rights and Freedoms.]”

Barring a successful provincial appeal (or invoking Section 33 of the Canadian Charter of Rights and Freedoms, also known as the Notwithstanding Clause), this is once again the map of council candidates for the October 22 election.

September 12, 2018
Oh, never mind. We’re back to the 25 wards because its not as if Doug Ford has anything better to do than override a judicial finding with the Notwithstanding Clause and re-introducing the vindictive legislation. And we may not even get to vote in advance polls.

Once the new law is passed, there will be two days for council candidates to sign up to run in the 25 wards.

Bill 5, the so-called “Better Local Government Act,” passed third reading on August 13, 2018, and was given royal assent on Tuesday August 14, despite vigourous opposition from the New Democratic Party. Bill 5 passed without any public consultation that usually takes place with any government legislation, as the Progressive Conservatives used procedural tactics to push through the bill as quickly as possible.

This means that legally, the City of Toronto must follow the province’s edict and elect only twenty-five councillors, with wards based on the current provincial riding boundaries. Scarborough Councillor Glenn De Baremaeker has already announced that he will no longer seek re-election.

I have no intentions of removing the map below, but I will be creating a new 25-ward map and populating it once nominations re-open. I suspect that many council candidates will not re-register, and that there will be many more incumbents facing off against each other.

There’s a faint hope that a legal injunction could suspend Bill 5. Council candidate and lawyer Rocco Achampong is seeking one, the courts will hear arguments by the end of the month.

With nominations now closed, I have made the final updates to the map of the 47 wards. I was already out of town on Thursday night when I found out about Premier Doug Ford’s plan to unilaterally cut the number of wards by nearly half, to 25, matching the federal and provincial ridings that came into effect in 2015 federally and 2018 provincially. Today, Ford’s Progressive Conservative government introduced the “Better Local Government Act” to make these changes, which only affect the City of Toronto.

There are many things wrong with this sudden announcement, which was made the day that nominations closed. It’s vindictive and mean-spirited, targeted only at the City of Toronto, which rejected Ford’s 2014 mayoral bid. It’s disrespectful to the 293 candidates who have stood for election in good faith. It also hurts fast-growing downtown most of all, which is already under-represented by the provincial and federal boundaries, which are based on the 2011 Census. It also makes it much harder for young and racialized candidates to seek office where incumbency provides a huge advantage.

I followed the ward boundary review closely. The process took several years, it went through two rounds of consultation, and passed a council vote and a legal challenge led by rookie councillor Julian Di Ciano. The 47 ward solution finally addresses inequities in population, and helps to address an unequal workload borne by city councillors. It’s extremely frustrating that Ford would chose to spend so much political capital resurrecting old battles.

Fifty-four candidates signed their nomination papers on Friday July 27. There were a few surprises in the last day of nominations — the biggest surprise is that former chief planner Jennifer Keesmaat registered to run for mayor (the mayoral race is not affected by the proposed legislation), but also that former councillor Chin Lee (who resigned earlier this year to run in the provincial election) will run against Jim Karygiannis in Ward 43. Conservative councillors David Shiner and Di Ciano (both of whom back Ford’s actions) never registered to run, either.

I’m hopeful that the City is able to fight the changes — the City of Toronto Act, 2006, specifically provides Toronto exclusive power over changes to its wards. There’s very little time to implement these changes, and the nominations have closed.

For now, at least, the 47 wards still stand.

I was going to make a few updates to the map tonight. This afternoon,  Lucy Trosi registered to run in Ward 23 (despite her appointment to replace the late Pam McConnell with a promise not to stand for election), and there were a few other updates.

But that might not even matter with tonight’s news that Premier Doug Ford is planning to blow everything up by overriding Toronto’s democracy by suspending the election campaign and unilaterally reducing the number of council seats from 47 to 25. I updated the map tonight, but I may not make any more updates until Monday. By then, nominations will have closed, and hopefully Ford’s vindictive move will be challenged.

Until then, I’m going to try to enjoy my long weekend.

I am continuing to update my map of candidates by ward. Recent changes include the sudden withdrawal of incumbent councillor Josh Colle and the last-minute nomination of his father, former Liberal MPP and municipal councillor Mike Colle, new candidates in Ward 20 including defeated Liberal MPP Han Dong and former CTV journalist and Ontario PC candidate Karlene Nation, and Kyle Ashley’s run against Jaye Robinson in Ward 27.

With only 26 hours before nominations close, incumbent councillors Michael Ford, Joe Mihevc and Josh Matlow are still without challengers and may be acclaimed. Councillors Justin Di Ciano and David Shiner still have yet to register for re-election or declare their retirement from city politics.

With less than two weeks left before municipal election nominations close in Toronto, all of the new 47 wards have at least one candidate running for city council. As the deadline to register looms closer, the council races have become more interesting.

As of July 14, only four incumbent city councillors — Justin Di Ciano, Glenn De Baeremaeker, Mark Grimes, and David Shiner — still have yet to register for re-election. Mike Layton and Neethan Shan, also late to register, did so this week.

Shelley Carroll, the long-time North York city councillor, resigned her seat earlier this year to run for the Ontario Liberals in the June 2018 election. Unfortunately, she lost that election (she would have been a great MPP and would have made a great contribution to the rebuild of the provincial Liberal Party). I am pleased that she filed her nomination to run in Ward 37.

It remains a possibility that other unsuccessful provincial candidates will run. Deanna Sgro (also known as Deanna Natale), the Liberal candidate for Humber River-Black Creek, will be running against incumbent Anthony Perruzza in Ward 8. There’s a possibility that other former city councillors that ran in the provincial election, including Chin Lee and Peter Milczyn, could still run in the municipal election.

There is still the possibility that former morning television host Ann Rohmer will run for council, likely against John Matlow in Ward 26. It was there that Mayor John Tory launched his re-election campaign. Matlow has been an outspoken critic of Mayor Tory’s policies, particularly the Scarborough subway extension, and Tory would probably like to see a friendlier councillor representing that ward.

On Monday, October 22, 2018, Torontonians will be electing a new city council. Even though incumbent mayor John Tory faces no high-profile challengers, the municipal election is very important. Council — not the mayor — holds most of the power. Changes to ward boundaries and newly open council races will make this an interesting election. It is my hope that citizens will take notice of these local races and turn out to make an informed choice. City council decisions impact the lives of every single city resident, everything from policing, libraries, and the fate of multi-billion dollar transit projects and road conditions. The mayor only holds one vote.

When the new council is formed on December 1, 2018, there will be 47 wards, up from 44. As I mentioned previously, Downtown Toronto will gain three new seats, and North York will gain one, but one seat is lost in Toronto’s west end, in an area currently represented by Wards 14, 17, and 18. Only seven wards remain unchanged.

Several city councillors have announced that they will not be running for another term in 2018. Janet Davis (Ward 31), John Filion (Ward 23), and Mary-Margaret McMahon (Ward 32) will not be seeking re-election, while Shelley Carroll (Ward 33) and Chin Lee (Ward 41) resigned their council seats to run for the Liberals in the recent provincial election. Ron Moeser (Ward 44) and Pam McConnell (Ward 28) died in office and were replaced by appointed caretakers who are not supposed to stand for election.

This means that at least ten new councillors will be elected this term.

The deadline for candidates to file nomination papers or withdraw from the election is Friday July 27, a mere five weeks from now. As of June 20, 2018, there were 11 candidates for mayor and 118 candidates for city council. Four of the new wards do not yet have  nominated candidates (Ward 2, Ward 8, Ward 19, and Ward 26).


Map of the new 47 wards and registered candidates in each

As I go through the list of candidates, what worries me are several crowded fields of challengers against ineffective or divisive councillors running for re-election.

In the old Ward 16 in 2014, a long list of candidates allowed Christin Carmichael-Greb, one of Toronto’s most invisible and least-working municipal officials, to win with only 3949 votes, 17.4% of all ballots cast. Carmichael-Greb had name recognition (the daughter of the local Conservative MP at the time) and support from John Tory’s campaign. In 2018, there are already four challengers in new Ward 14 against Councillor Carmichael-Greb, making her re-election bid much easier than it should be. There are nine candidates against Scarborough Councillor Michelle Holland-Berardinetti.

Ranked ballots — which would allow voters to chose first, second, and third-choice candidates could negate this problem. But another scandal-ridden councillor, Justin Di Ciano (who is currently under OPP investigation), moved a motion at council in 2015 to not ask the provincial government to permit the city to institute this democratic change. Unfortunately, a majority of councillors — including Mammoliti, Carmichael-Greb, and Holland-Berardinetti — voted with Di Ciano.

Incumbents — especially mediocre ones — know that they have the advantage in municipal elections, especially when voter turnout is low, there are no party labels and name recognition is a huge asset. A crowded field of challengers is even better for them.

I admire the courage and hard work necessary to run for office. But I wish there was a better way of electing good local representatives and holding our politicians to account.

Great page! Thanks for your efforts. Question: On the Toronto.ca Elections page, the dropdown tab for Withdrawn Candidates does not show the chap who was running in Ward 2 vs. Michael Ford. Do you know whether there is a reason for this? Do you happen to recall his name? Regards, Patricia

I do not recall any other candidate running in Ward 2. I wish there was someone willing to challenge Ford – if for no other reason than to keep an incumbent councillor answerable to their constituents. The same reason why I’m glad there are now challengers to Joe Cressy and Jaye Robinson.

Thanks for the speedy reply. A colleague who lives out that way was glad when someone registered to challenge the Ford. I also recall seeing someone listed in Ward 2, and in the Withdrawns, if only for a few days. What would be the best number at the City to call to enquire, do you think?

PS. Good luck to Michelle Garcia, who seems to have just registered in Ward 2.

Thanks for the helpful map – I’ve been confused about the new boundaries. Obviously some of the candidates are too. I live in Ward 19 and got a some campaign literature in my mailbox from a candidate who is actually running in Ward 20. Curse you Doug Ford for making a mess of our election!