When Toronto adopted a 47-ward model for the 2018 election, North York was going to get one of the three additional wards. North York Centre, the section of Yonge Street between Highway 401 and Steeles Avenue, is one of the fastest growing parts of the city. New condominium towers have gone up along the Yonge and Sheppard Subways, bringing in thousands of new residents.

John Filion, councillor for old Ward 23, was one of Toronto’s hardest-working politicians. Not only did he have to represent thousands more residents than most of his colleagues, he also had to keep on top of dozens of planning applications. It was probably with relief that he announced his retirement in June. He endorsed two successors for the new wards comprising his old turf:  Markus O’Brien Fehr (his executive assistant) in the new Ward 28 and Lily Cheng (a local community organizer) in the new Ward 29.

Meanwhile, it looked as though fellow council veteran Shelley Carroll was also leaving City Hall. Earlier this year, she resigned as councillor in old Ward 33 to run as a Liberal in the June provincial election, creating a potential opening in new Ward 31. Fellow Liberal Dan Fox was poised to make another run against David Shiner in Ward 30. It looked like things were going to get interesting in North York.

But then the Progressive Conservatives were elected to Queen’s Park, and Carroll lost in Don Valley North. At the end of July, Doug Ford’s provincial government introduced Bill 5, reducing the number of wards from 47 to 25.

The four wards drawn up for the part of North York east of Bathurst Street and north of Highway 401 was reduced from four to two. While David Shiner retired from municipal politics, it left hopeful Dan Fox without an open seat to run in. Much of former Ward 24, where Fox ran in 2014, was encompassed by Ward 17, Don Valley North. This is where Carroll was going to try to return to council.

The council appointee that replaced Carroll in old Ward 33, Jonathan Tsao, had promised not to run for re-election. Challengers to Carroll in Don Valley West included former TDSB trustee Ken Lister and anti-sex education activist Christina Liu. In total, there were eight candidates running in Ward 17.

Carroll won easily, netting just over 40 percent of all votes cast. Liu placed second with 29 percent of the vote. Carroll did very well in the southern part of the newly enlarged ward, though Liu won 14 polls, mostly in the northwest, and tied Carroll in Poll 32. 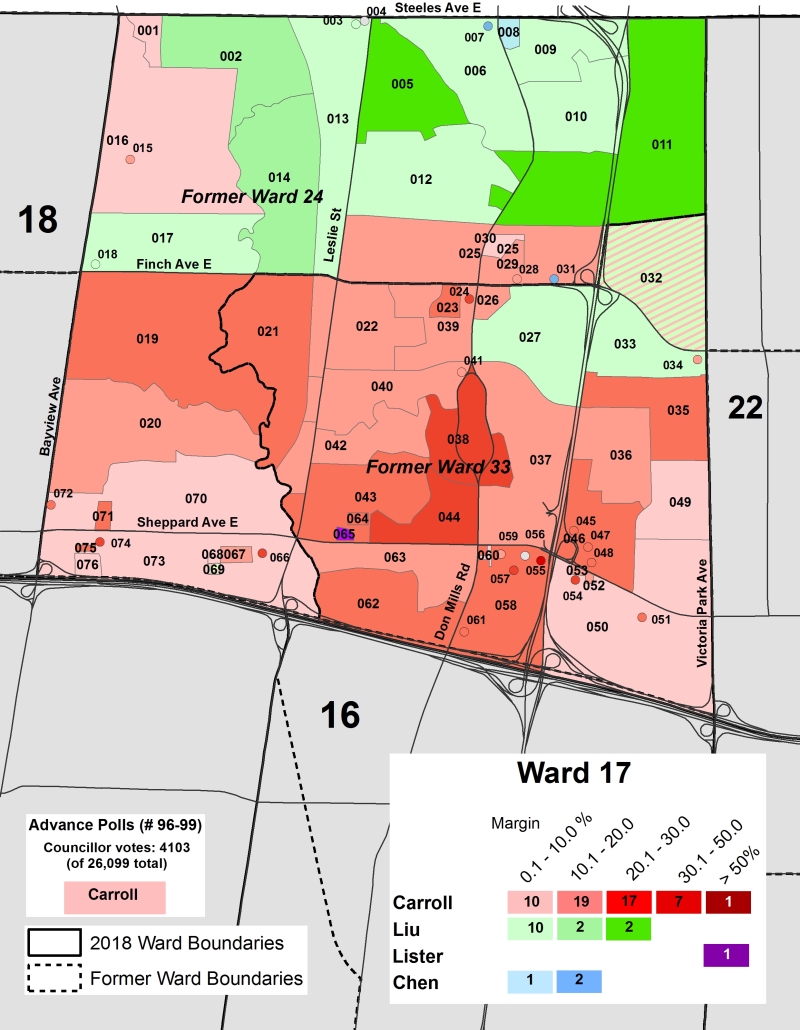 In Willowdale, John Filion jumped back into the race, claiming that the lack of an incumbent would allow a candidate tied to land speculators to win. While Markus O’Brien Fehr stepped aside, Lily Cheng did not.

Other candidates in Willowdale included Norm Gardner, a former Metro councillor and police board chair; Saman Tabasinejad, the New Democratic candidate for Willowdale in the provincial election; businessman Sonny Cho; Sam Moini, a pro-Doug Ford candidate who was known for his advocacy on behalf of taxi owners and drivers; and David Mousavi, a lawyer who came in second to Filion in the 2014 election. There were 18 candidates in total.

Filion came in first place, with just 31.1 percent of the vote. Cheng placed second with 19.7 percent, and Cho came in third with 12 percent. Cheng placed first in 25 polls, especially along the Yonge Street corridor.

While John Filion has been an effective progressive councillor, especially during the Rob Ford years, his decision to jump back in the race, threw Cheng under the metaphorical bus. Had he committed to retiring but made a strong effort to support her campaign, I believe that she would have won. Conservative candidates like Mousavi and Moini were unable to get more than 10 percent of the vote; it appears that Filion’s fears were unfounded.

Also, with that many “viable-esque” candidates, there’s bound to be a few clustereffed poll results–indeed, in that far-NW former-Ward-10 enclave, both Polls #1 and #4 (the latter being the only poll De Santis won) were “won” with only 16% of the vote–and combined, those two would have been won by Gardner (who won neither) with under 15%. (But that entire former Ward 10 portion was won by Gardner with 18%, thanks to a particularly good result for him in #2. For some reason he also won #63 in a landslide, the Atrium II condo at Doris & Spring Garden–does he live there?)

Of note in Ward 17 north of Finch

Liu did Ok among the largely Chinese speaking house / condo / townhome owners.
Where she got no traction was apartment and townhome renters along Finch & on Ruddington – they skew younger and more diverse.