Earlier this week, the Toronto Transit Commission (TTC) released its agenda for the next board meeting, to be held on March 23. Among the items to be discussed are updates on the delayed Line 1 subway extension to York University and Vaughan, plans for the Line 2 subway extension to Scarborough Centre, the new MiWay/GO Transit terminal at Kipling Station, the planned new 514 Cherry streetcar line and other Waterfront bus improvements, and a ridership update.

As always, Steve Munro is on top of it all, and I encourage you to read his post.

I wanted to make a few observations about ridership, especially in Toronto’s suburbs. Growth in the TTC’s ridership has slowed down in the last three years, from a 2.1% annual increase in 2013, to a much more modest 0.5% increase in 2015.

Ridership figures are not detailed enough to know at what times of the day ridership is changing, nor on what routes. But ridership growth has fallen (or even declined) for other major Canadian transit systems, including Vancouver, Montreal, and Ottawa. There are many causes for changes to ridership — population and employment growth or decline, fare increases, service improvements or cuts, even the cost of gas, which has been declining in the last two years. Much of the employment growth within the City of Toronto has been in the downtown core, but so has the population growth due to new residential highrises. (I’m one of thousands who live and work in or near the downtown core — my TTC use is now mostly during the evenings and weekends as I mostly walk to work).

Hopefully, the Commission and the city don’t use this short-term trend as  an excuse to hold back on needed service improvements or projects such as the Relief Line — for one thing, many buses, streetcars and subway trains are already overcapacity, and it is impossible to know whether slower ridership increases represent a long-term trend, or a short-term blip.

There was one table in the TTC ridership update that caught my attention. The table, on page 5, shows the ridership for every Greater Toronto and Hamilton Area transit system (though excluding Milton Transit). I reproduced that table below.

While the TTC’s ridership growth has slowed, ridership in many suburban municipalities have either flatlined or declined. Only Mississauga and Brampton show consistent, positive growth over the last three years. MiWay, previously known as Mississauga Transit, hasn’t expanded transit operations that much in the last few years, but that city continues to enjoy modest employment growth and improved connections to the airport, Brampton Transit and the TTC. It is currently building a new bus rapid transit (BRT) line, the Mississauga Transitway (more on that in a later post), and city council is backing the Hurontario LRT line, which would largely replace bus service on its busiest corridor.

Brampton’s growth has been, by far, the most impressive. That suburban municipality is growing thanks mostly due to new sprawling subdivisions, but since in the last decade, Brampton Transit has been introducing annual system improvements, including the Zum “BRT-lite” network of limited-stop bus routes. Brampton’s ridership is now almost that of the Hamilton Street Railway (HSR). Unlike Hamilton, Brampton doesn’t have two major post-secondary educational institutions, nor a dense urban core, though it serves Humber College, York University, and two secondary Sheridan College campuses in Brampton and Misssissauga.

In Hamilton, ridership dropped by 1.8% in 2015. Most ridership in Hamilton is concentrated in the lower city, as well as a few trip generators in the suburbs, including Mohawk Collage on the Mountain, and Lime Ridge Mall. Many parts of the lower city have been hit hard by job losses in that city’s major industries, though new subdivisions (and, to a lesser extent, downtown gentrificaton) have contributed to modest population growth. Hamilton is going ahead with a provincially-funded east-west light rail line that will connect McMaster University, Downtown Hamilton, and the east end.

Elsewhere, transit ridership growth has been quite disappointing. Burlington Transit saw a drastic 13.3% decline over the last three years, Durham Region, which I recently visited, saw a major decrease in 2015. However, there is lots of promise in its five-year service strategies, which will improve and simplify the agency’s route structure and provide enhanced service. 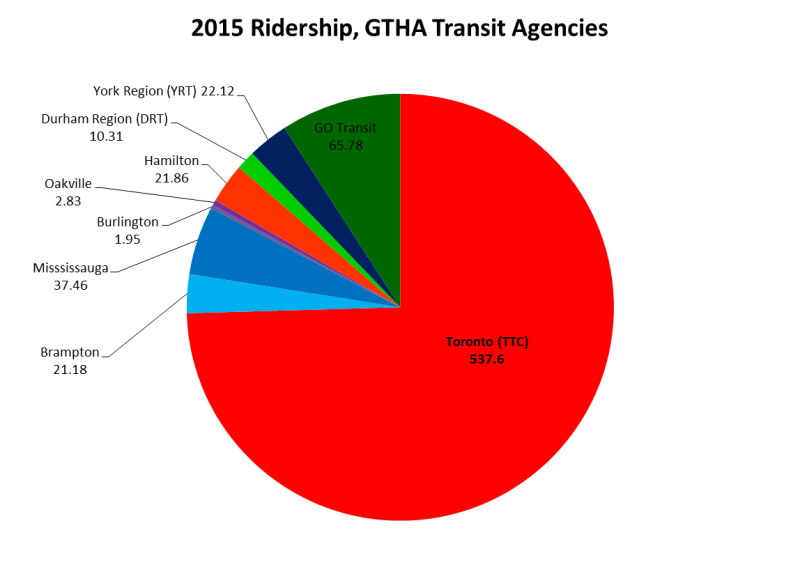 York Region Transit, serving a population of 1.2 million, has only 1 million annual riders more than Brampton, whose population is nearly half of York’s. And despite adding new subdivisions (and a few new residential towers), ridership declined in the last two years. As illustrated in the table below, YRT’s ridership per capita is less than half of Hamilton’s or Mississauga’s. 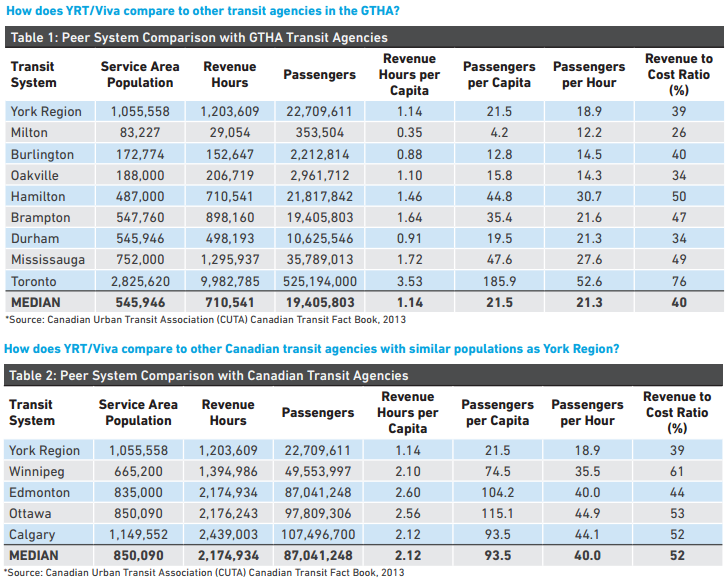 It’s interesting that despite poor transit ridership (amid York Region Council-mandated service cuts and steep fare hikes) York Region, with senior government assistance, is spending $1.4 billion on dedicated median busways on Highway 7, Yonge Street and Davis Drive. York Region will get the Spadina subway extension in 2017, and it pines for an extension of the over-burdened Yonge Subway to Richmond Hill Centre.

In York Region, there’s a troubling disconnect between spending money on capital projects and funding the services that will use the shiny new infrastructure, or feed ridership to it. Brampton has proven that growing service, not necessarily fancy infrastructure, will grow ridership. That said, it remains disappointing that the suburban municipality with the best record for ridership growth in the Toronto region rejected a funded light rail transit line to its downtown core.

One reply on “On transit ridership in the GTHA”

Maybe the York Region government & YRT should be “told” that Toronto and the TTC will not be running subway service into York Region at a frequency greater than that for YRT’s VIVA lines. In other works we will be applying the same standards to the transit service we provide in York Region that you have established for your top level of transit-VIVA BRT