Earlier this week, I took a train from Union Station to Bramalea, as I was preparing for a walk that I will hosting on Sunday exploring Canada’s first satellite city.

Bramalea Station opened in 1973 when the Georgetown GO train service — GO Transit’s second commuter rail line — was inaugurated. The station is located at the southwest corner of Steeles Avenue and Bramalea Road, surrounded by factories, warehouses and busy roads and highways.

There’s little to fault GO Transit for locating its station where it is. In 1973, GO was still in its infancy, launching its first rail services along the Lakeshore Line in 1967. It wasn’t anything more than a commuter rail service, offering downtown-bound commuters an alternative to driving all the way in; free and ample parking was part of that successful model. In 1967, GO Transit was created to reduce the need to upgrade provincial highways; it allowed Downtown Toronto to become a bustling global financial centre without needing huge parking lots and garages and more freeways feeding into it; .

The GO station is located in Bramalea’s south end, next to the CN mainline, surrounded by land designated for industrial development since 1959, when work began on that new suburb. The station is located near a waste-to-energy plant (an incinerator), and is located under Pearson Airport’s flight paths. Since GO insists on providing free parking to its customers, Bramalea (unlike, say, Downtown Brampton) isn’t a bad place to put lots of parking spots; in total, Bramalea has 2,377 parking spots. And since Bramalea Station is adjacent to Highway 407, it’s a major transfer point for GO bus routes to York University, Hamilton, Guelph and Kitchener.

But like too many GO stations, Bramalea is needlessly hostile to pedestrians and cyclists, and is even hostile for many local transit users. As Metrolinx, the agency responsible for GO Transit, pursues Regional Express Rail (RER), it has a responsibility to improve Bramalea Station. As it exists right now, Bramalea is a terrible transit terminal.

Regional Express Rail promises to change GO Transit’s rail system from a commuter rail service to a true regional rail network. It promises frequent, electric train services serving Toronto and many inner-905 suburbs. But the initial plans focus on tracks owned by Metrolinx. This poses a problem for Brampton. Bramalea, not urban Downtown Brampton, will be the terminus of most GO trains.

Map of GO Kitchener Corridor showing proposed GO RER rail services between Union Station and Kitchener. Frequent, 15-minute services will only go as far west as Bramalea Station; no rail services at all are planned during evening and weekend hours west of Bramalea. [Source]

Metrolinx owns the rail corridor between Union Station and Halwest Junction, which is located just east of Bramalea Station. Between Halwest and Silver Junction, near Georgetown, the tracks are owned by CN and makes up part of its main freight corridor between the United States, Toronto, and eastern Canada. Either major rail expansion through Downtown Brampton will be required for additional GO services, or the construction of a new rail corridor, known as the “Missing Link,” will need to be built.

Bramalea Station has a bus loop adjacent to the train platforms which makes many bus-train connections relatively painless. But not all Brampton Transit routes serve the station directly: Routes 11 Steeles and 511 Zum serve stops on Steeles Avenue, while Route 115 Airport Express only stops on Bramalea Road.

To get to these Brampton Transit stops, the vulnerable pedestrian must first cross Bramalea Station’s gigantic parking lot, then make their way across up to 14 traffic lanes at the intersection of Bramalea Road and Steeles Avenue, including channelized right-turn lanes on all four corners. With heavy car and truck traffic, the intersection is very intimidating to cross on foot or by bicycle. 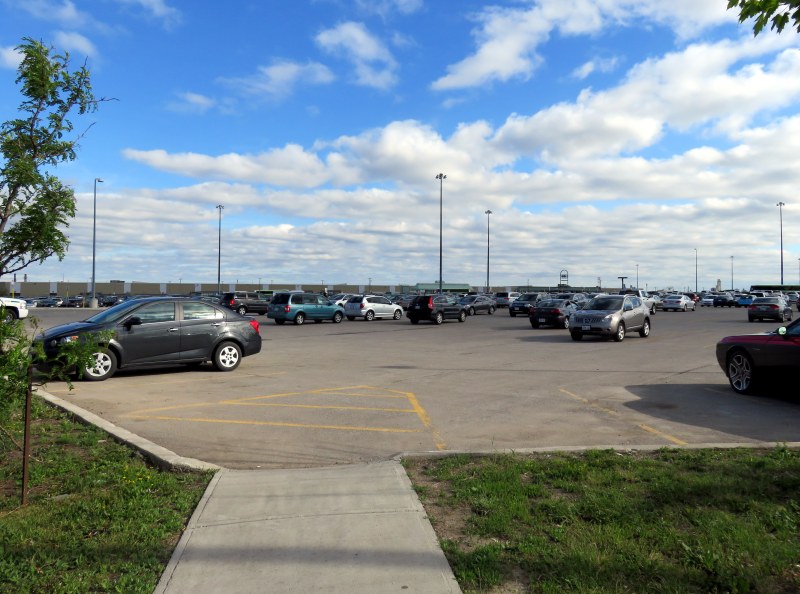 The corner of Steeles Avenue and Bramalea Road

There is a well-worn, yet not legitimate path between the signalized crossing at the GO Transit parking lot and Steeles Avenue to Orenda Road to the north. The path crosses an industrial rail spur and cuts across vacant land. To the north are two new rental high rise towers, and the residential A and B Sections of Bramalea.

A well-worn, yet unauthorized path is probably the safest pedestrian route to nearby residential areas to the north.

The path is clearly visible between Steeles Avenue and the corner of Orenda Road and Victoria Crescent.

Unless Metrolinx is determined to extend GO RER through Brampton, where better transit connections and more passengers can be properly served, many modifications should be made to Bramalea Station to improve bus connections and promote active transportation.

Bramalea Station should be treated a temporary, not a permanent terminus for GO RER. It’s a bad location, distant from high-density residential and commercial development, and it’s a far distance from most of Brampton’s population. But at least Bramalea is useful for parking and bus connections, so it is, and should remain a logical and important stop on the Kitchener corridor.

In the meantime, there’s plenty that Metrolinx, the City of Brampton, and the Region of Peel can do in the short term to make some lemonade out of a lemon of this railway station.

Except that this “well-worn” path exits onto private property in the industrial zone that exists on Orenda Road. The City does not OWN that land. The folks who use it are, technically, trespassing. Further, if you are intimidated by the necessity of crossing a large parking lot, perhaps you need a refresher with Elmer the Safety Elephant. Same goes for crossing the Steeles/Bramalea intersection. If you follow your lights, where is the problem? As someone who passes through that intersection twice a day during the peak times, I can tell you that the traffic moves through those corners at a snail’s pace. It is NOT the 401.

First of all, I acknowledged that the path is not legitimate and unauthorised. But there are also no fences or signs posted despite the path’s use.

I don’t think a land sale or formal encroachment agreement is unreasonable in this case.

Furthermore, Bramalea is a transit station, and I don’t think it’s fair to pedestrians that there aren’t many safe and comfortable paths to the station. Have you been to a GO Station when evening trains arrive? Most drivers are in a hurry to leave. It’s not terribly safe no matter how many safety messages you were exposed to as a kid.

I just expect Metrolinx and the local municipalities to recognise the problems here and do better. That isn’t too much to ask.

Yes! Thanks for your detailed post. I make the Union-to-Bramalea counter-peak journey once or twice a week, and am always appalled by the hostility of the place. Crossing the parking lot and the street is quite terrifying, and certainly not suitable for someone with a mobility challenge.

Regarding the ‘unauthorised path’ and its nearby bus stop, I wish you had a photo of trying to cross the street there toward the station — there’s a pedestrian crossing, but there’s nowhere to go once getting to the other side. The crosswalk is blocked by a large vehicle barrier; pedestrians need to walk on the road to get around it. Bramalea GO desperately needs some wide, safe sidewalks leading from the street (including the on-street connections) to the station.

I’m not sure I agree with re-routing Brampton’s grid-based buses into the station, as that adds an unnessessary detour for everyone else. A couple of well-designed pedestrian connections would do wonders.

University of Toronto wants to build a campus in Brampton. The Canadian Tire lands may be the only option given that the Hurontario LRT will terminate at Steeles rather than downtown Brampton as originally planned.

As a driver who uses that station, I agree with your points. It’s a dangerous place for pedestrians because hundreds of people exit the trains and then bottleneck up to the exits, fighting for every inch of available space. I’ve seen many a close call between a vehicle and someone navigating by foot, and we all know how that collision would end.

Interesting article. Other than passing through in the train, I’ve only ever had to access Bramalea by bus, and it struck me as being reasonably direct as a bus hub, but highly impersonal as a place of interest. Functional and nothing more. The other side of it, accessing it from the parking lot, has only been apparent by viewing it from the upper floor of a bi-level coach, and it looked barren and bleak. From reading this, I now have an appreciation of the looks matching reality.

I doubt that the Canadian Tire warehouse can/will become “office and mixed-use development”….but, it could be the ideal site for Pickering station style multi-level parking structure with a bridge to the station…..freeing up that massive (and better located than the CT site) piece of land that the surface parking lot currently occupies……that land has far more potential for a mixed use development.