A new low for the Scarborough Subway champion

Note: a version of this article has been cross-posted to Spacing Toronto

For 2016’s annual Torontoist Heroes and Villains feature, I nominated Toronto Councillor Glenn De Baeremaeker (Ward 38, Scarborough Centre) as villain of the year. (“Pedestrian blaming” won that dubious honour.) But I remain proud of my choice. As I wrote back in December:

De Baeremaeker’s record of environmentalism has been overshadowed by an increasingly antagonistic tone, pitting supposedly downtrodden Scarborough against the rest of the city in his one-track quest to build a one-stop subway extension to his ward. In his myopic support of the subway, De Baeremaeker is opportunistic and vindictive, takes the low road, insults critics who engage in good faith debates, and in the process does a disservice to the community he represents.

Yesterday, May 10, the City of Toronto held a public consultation at Scarborough Civic Centre on the next phase of planning for that one-stop, 6.2-kilometre subway extension, which is estimated to cost $3.35 billion, and open no earlier than 2026.

I wish I was able to attend last night’s meeting, as disgruntled Scarborough residents questioned the merits of that transit plan. And Councillor De Baeremaeker shamelessly blamed “downtown councillors” for the shortcomings of that one-stop subway. For a councillor who is rightly proud of his past environmental advocacy, it was surely a low point. 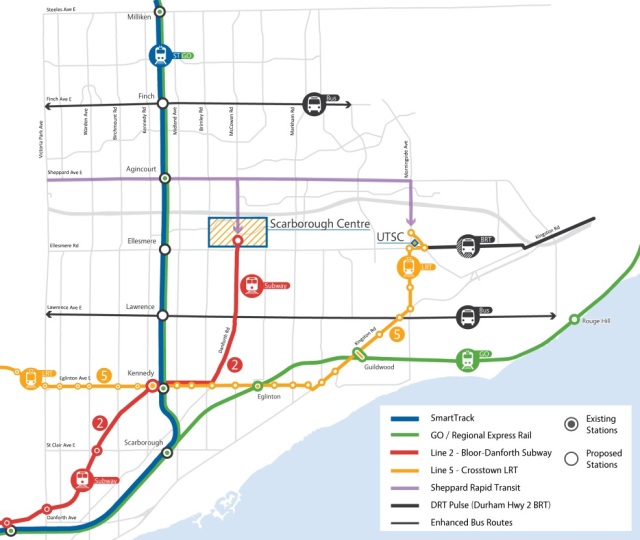 City of Toronto map from February 2016 illustrating current plans for the Scarborough Subway and connecting transit.

At the public consultation, TTC and City planning staff answered queries from members of the public, many questioning the utility of the single-stop subway. There are no additional funds to rough in future stations, such as at McCowan Road and Lawrence Avenue, where the line would intersect the busy 54 Lawrence East bus and serve Scarborough General Hospital. As building future stations later would require an extended shut-down of the line, the one-stop subway extension will likely be forever a one-stop subway.

(The eastern extension of the Eglinton-Crosstown LRT from Kennedy Station to University of Toronto’s Scarborough Campus is also part of the new plan for Scarborough, but the LRT component is unfunded.)

Shameless as ever, Councillor De Baeremaeker resorted to strawman arguments, talking up a “suburban/urban divide”:

[De Baeremaeker] blamed “downtown councillors,” who represent the most densely populated wards in the city, for not wanting to fund more frequent transit stops like their residents enjoy.

Yes, it is true that all councillors representing central Toronto opposed the subway extension, but so did several suburban politicians, most notably Councillor Paul Ainslie (Ward 43 – Scarborough East). Yet not one of those councillors wanted less transit for Scarborough. Instead, they backed a seven-stop LRT replacement for the ageing Scarborough rapid transit line, including an extension to Centennial College and Sheppard Avenue in Malvern. That less-expensive line was fully funded by the provincial government, which would have permitted scarce funds to be spent on other transit projects across Toronto.

Meanwhile Mayor John Tory was most interested in pushing SmartTrack, a fantasy rail project that got pared down as parts of the line were found to be impossible to build, and costs increased. The eastern end of SmartTrack conflicted with the Scarborough Subway extension. The three-stop subway plan was cut to a single stop at Scarborough Centre, to keep costs down and to not cannibalize SmartTrack.

It is also worth noting that until 2012, De Baeremaeker supported Transit City, the transit plan championed by David Miller that would have delivered three new light rail lines to Scarborough.

I am not surprised by De Baeremaeker’s shameless politics. But his performance last night was especially crass and dishonest. Backed into a corner, faced with angry local residents, he lashed out at imaginary villains. But subway backers largely have themselves to blame; despite winning every recent vote on the subway plan, they have only one stop to show for it.