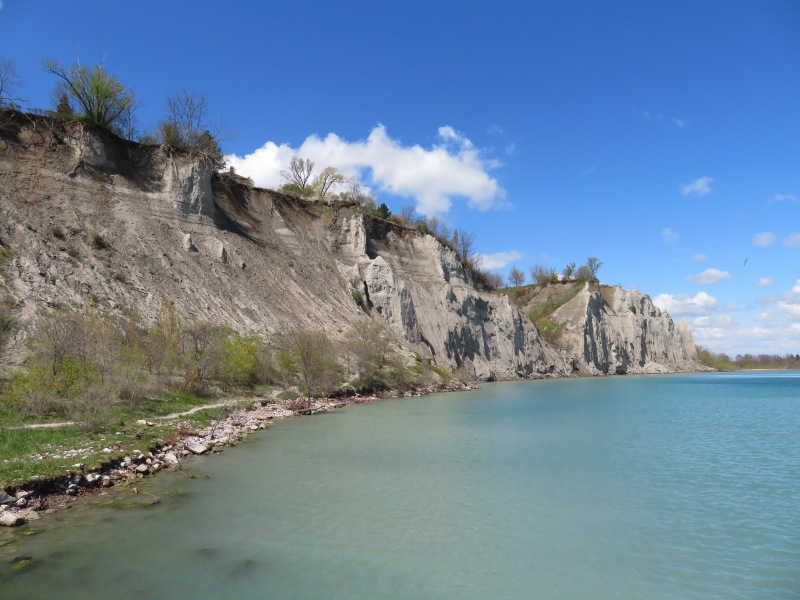 At the bottom of the Scarborough Bluffs, west of Bluffer’s Park

Lake Ontario, like all five of the Great Lakes, is more a freshwater sea than merely a lake. It’s over three hundred kilometres long, from Hamilton to Kingston, bordering two countries, with several inhabited islands, and features a varied and fascinating landscape. Lake Ontario’s vastness is best appreciated from its shore, whether it be the Toronto Islands, on the east side, on the beaches at Presqu’ile or Sandbanks Provincial Parks, or from the top of the Scarborough Bluffs.

The Waterfront Trail, at least in theory, is a wonderful way to explore these varied shorelines of Ontario’s vast Great Lakes on foot or by bicycle. Founded in 1995, the trail now extends from the Quebec border, west along the St. Lawrence River, through Niagara, along the north shore of Lake Erie, and up the Detroit and St. Clair Rivers to Lake Huron. I cycle the Waterfront Trail between Toronto and Hamilton several times a year, an 85-kilometre trip. GO Transit’s trains and buses follow the Waterfront Trail from Durham Region to the Niagara River, making it easy to walk or cycle one-way, returning by train and/or bus.

But the Waterfront Trail is dependent on municipal infrastructure, or the lack of it. Most of the trail’s route winds through rural areas, following country roads and highways where segregated multi-use trails aren’t built: in many places, the Waterfront Trail is neither close to the water, nor is it a ‘trail’ of any kind. At least in Northumberland County and Niagara Region, paved shoulders and bike lanes are found along the busier country roads. But this is not always the case.

In urban areas, though, like the City of Toronto, there is both the demand and the resources for safe pedestrian and cycling infrastructure along the waterfront. In the old city of Toronto, the Waterfront Trail follows the Martin Goodman Trail, and is nearly completely segregated from motor traffic.

But in Etobicoke and in Scarborough, much of the trail is routed via on-street sections; in sections, pedestrians must follow sidewalks next to busy sections of Lake Shore Boulevard and Kingston Road; for cyclists, there aren’t even any bike lanes — they have the choice of either riding with traffic, or illegally riding on the sidewalks.


Route of the Waterfront Trail within the City of Toronto

A few weeks ago, on a lovely May weekend, my fiancée and I walked along the Lake Ontario shoreline from Woodbine Beach to Bluffer’s Park. We got to see the very best, and the very worst, Toronto’s section of the Waterfront Trail has to offer.

Woodbine Beach — along with much of the Lake Ontario shore — has been inundated with floodwaters due to a wet start to the year. The Toronto Islands are closed to visitors, and so are some of the multi-use paths along the waterfront in Toronto and Hamilton. The pedestrian-only Boardwalk along the Beaches is always popular, especially with dog-walkers; it is separated from the multi-use Martin Goodman Trail. The grounds of the RC Harris Water Filtration Plant, on the old Toronto-Scarborough border, are open to wander as well.

The Waterfront Trail east of the Beaches mostly follows residential streets, as well as Kingston Road near the Toronto Hunt Club. The sidewalk on the south side of Queen Street East comes to an end at Fallingbrook Road. Ironically just beyond the end of the sidewalk (and the Waterfront Trail marker) is one of those “slow down: kids at play” signs, this one sponsored by a luxury car brand. (On Fallingbrook, there is a sidewalk, but on the west side of the street only.) Some of the residential streets have sidewalks, some do not. Views of the lake are limited between the RC Harris Plant and Birchmount Avenue.

Where Queen Street — and the sidewalk — ends

West of Birchmount Avenue, the Waterfront Trail once again lives up to its promise, with stunning views at the Harrison Properties and at Rosetta McClain Gardens (though bicycles are prohibited within the gardens.) Here, we spotted turkey vultures, tree swallows, cardinals, and other birds. 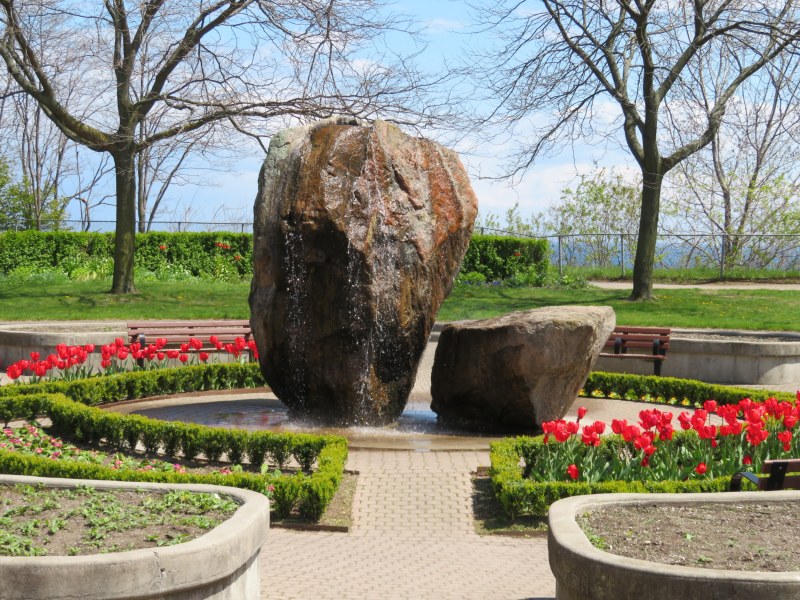 At Scarborough Heights Park, there’s an informal trail down to the water’s edge, but it is subject to periodic closures (the Toronto and Region Conservation Authority posts notices at these access points about potential dangers or construction activity; use appropriate caution and always stay back from the cliff edge.) The views here are as good, if not better, than those in Bluffer’s Park.

Between Scarborough Heights Park and Bluffer’s Park, the Waterfront Trail follows more residential streets; many of those do not have sidewalks either. On Midland Avenue South, local residents resisted new sidewalks in 2015, even though the relatively busy collector street connects several parks. The city did install a new sidewalk along the part of Midland that hosts the Waterfront Trail, but it suddenly ends just short of Romana Drive, at a planted bush, without a curb cut at the corner. This might be the worst new sidewalk installation in the city. 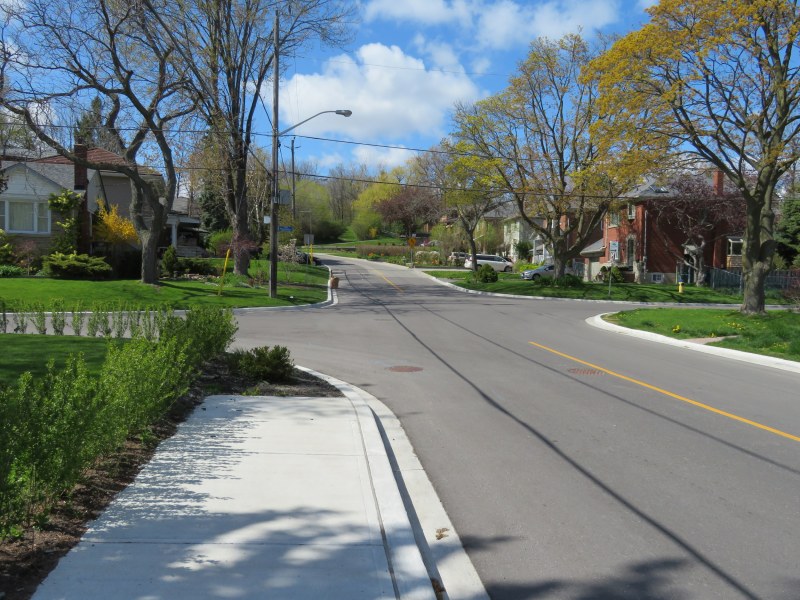 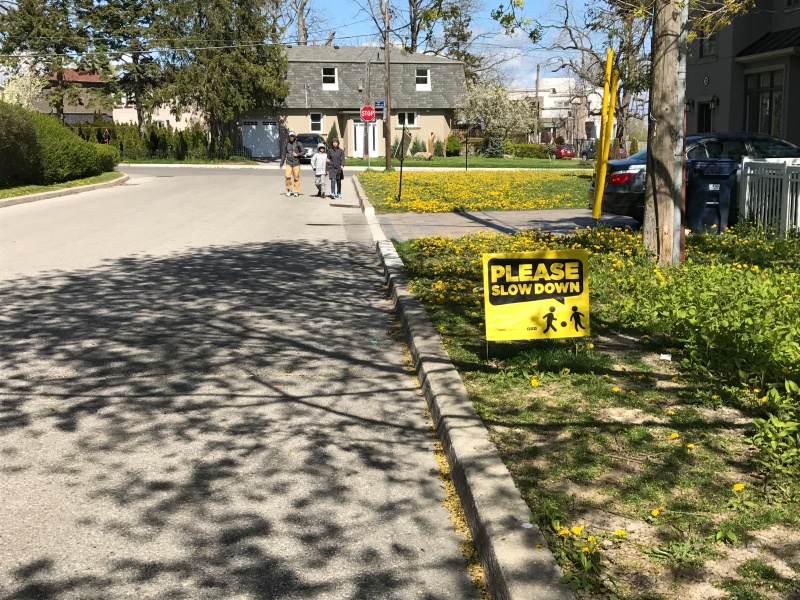 Family walks along the Waterfront Trail approaching a “please slow down” lawn sign on Romana Drive.

Finally, we reached Bluffer’s Park. The popular park is only accessible via a two-lane road, Brimley Road. The closest TTC buses are at Brimley and Kingston Roads, meaning that anyone without a car must walk down the roadway. There is a paved trail half-way to the bottom, but it still requires navigating a steep hill, shared with motorists.

Multi-use path, half-way down the hill

Toronto has an amazing waterfront, all the way from the Rouge River in the east to Etobicoke Creek in the west. Natural features such as the Scarborough Bluffs are popular places, but can be difficult to get to without a car. While the Waterfront Trail strives to connect the lakefront parks together, it is not always safe for pedestrians or cyclists. There’s so much more that can be done to promote Toronto’s greatest natural resource, especially outside of the downtown core.