VIA Rail train at Brampton Station, on the Toronto-Kitchener rail corridor

Today, Premier Kathleen Wynne announced the commencement of an Environmental Assessment on bringing high-speed rail to Southwestern Ontario, connecting Toronto and Pearson Airport with Guelph, Kitchener, and London, with Phase II continuing to Windsor, with a potential stop in Chatham.

Former federal Transport Minister David Collenette was assigned to write a report on building the corridor; it is now public on the Ministry of Transportation’s website. It proposes operating speeds up to 250 km/h, making it a true high speed line (though slower than many lines in Europe and East Asia, which have cruising speeds between 270 and 320 km/h). The estimated cost of the project is estimated to be $21-billion, reducing travel times from Toronto to Windsor to a mere two hours. 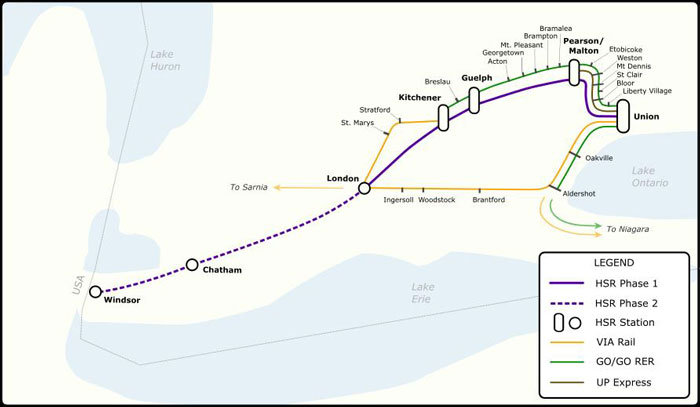 An option for a 300 km/h HSR service was studied, but found to be even more expensive, requiring more dedicated tracks. The 250 km/h option will allow it to use most of the existing Toronto-London and London-Windsor corridors.

For southwestern Ontario, high speed rail could be a boon. Kitchener-Waterloo is a major educational and technological hub; faster and more frequent rail service will benefit university students, tech workers, and other commuters, perhaps those priced out of the Toronto housing market. London’s economy has taken some hits in recent years, so bringing it within commuting distance to Toronto and K-W gives residents there more options.

Between Toronto and Kitchener, the report assumes two off-peak HSR trains an hour, and one GO train every hour, making local stops. It also assumes that GO RER service will continue to terminate at Bramalea, a poor location to terminate regional rail services; Downtown Brampton is one stop away. Building the “missing link” along Highway 407 will allow many more trains to pass through Downtown Brampton, which would allow for local RER trains to be extended to west Brampton, at Mount Pleasant GO. It would be a shame if the HSR plans (which, in principle, I support) pushed aside regional and local needs.

Statford and St. Marys, which are only served by VIA trains (and no intercity coach service) will also have to be considered, as they will be bypassed by HSR. As well, towns and cities elsewhere in southwest Ontario, such as Simcoe, Tillsonburg, Wallaceburg, and St. Thomas, have no bus or rail access. For less than the $15 million pledged for the HSR EA, the province could fund several years’ worth of basic intercity bus service to connect these communities together.

Unless assumptions change, Brampton residents will see twice as many trains speed by their downtown core than stop, which I think is unfortunate. In the original post below, I was worried that high speed rail dreams would distract from more immediate needs. I’m now afraid that I was right.

When have I heard this one before?

According to CTV News, the provincial government is looking to build a new high-speed rail line between Toronto, Kitchener, and London. The new plan, to be announced next month, is based on the work of former federal Transport Minister David Collenette.

During his time as Transport Minister under Prime Minister Jean Chretien, Collenette backed incremental VIA Rail improvements, as well as VIA-FAST, a higher-speed train service between Toronto, Ottawa, and Montreal. Those proposed improvements were cancelled when Paul Martin became prime minister; currently VIA is pushing for a revised version of that previous plan. Collenette also pushed hard for a rail link between Toronto Pearson International Airport and Union Station, a fundamentally flawed proposal known as “Blue 22.” That airport rail link proposal was later relaunched as a provincial project and opened as UP Express in 2015.

Ontario Transportation Minister Steven Del Duca was not especially clear about the plans for such as high-speed rail service, saying “…there are multiple definitions for high-speed rail depending on what you’re looking at.” Del Duca cited “geographical limitations,” while hoping that the federal government would contribute funds towards the project.

Interestingly, only a week ago, Deputy Minister Deb Matthews (and London MPP) was downplaying the province’s plans, saying the province only promised to study, but not necessarily build, the high-speed rail corridor.

I worry that high-speed rail is a distraction. In Canada, we have an abysmal record of proposing high-speed rail projects, but never following through. Even VIA’s less ambitious plan for dedicated tracks and new equipment to provide more frequent and reliable service, with somewhat faster travel times, is not yet secure.

There is already a Toronto-Kitchener-London service; two VIA trains operate daily in each direction along the entire route, while GO Transit operates more frequent weekday trains to Brampton and four weekday round trips to Kitchener. Before the 1990 Brian Mulroney-era VIA cuts, there were five round trips on this line. In the 1980s, the fastest VIA train between Toronto, Kitchener, and London took 3 hours, 2 minutes; today, the fastest train is 3 hours, 22 minutes.

This Rick Mercer Report video will never get old

All that I want for the Toronto-Kitchener-London corridor in the short-to-medium term is the same as what VIA is proposing between Toronto and Montreal:

Some of these improvements can be started within the next year, before the 2018 provincial election. If the province wants to show that it’s serious about providing effective rail service to Kitchener and London, there’s no need for another high-speed rail study. Simply continue the work on the “Missing Link,” plan for GO RER to continue west of Bramalea GO, improve the existing rail infrastructure, and acquire the optimal fleet for medium-distance rail services. Once that is complete, planning for even higher speeds, possibly with a new purpose-built alignment, should begin.

Canadians have been teased with high-speed rail proposals that never get anywhere, meanwhile existing rail infrastructure is neglected and intercity services are cut. It’s time to get moving with a sensible plan that can start right now.

8 replies on “A need for high-speed rail reality (Updated)”

[…] month. Sean Marshall notes how significant improvements and speed could be accomplished with conventional rail service, while Mike Farwell laments how our futile obsession with continuously widening highways instead of […]

I’ve always felt that high-speed rail is premature in Canada, we barely have a functional conventional passenger train system, the absence of which makes any high-speed services of limited use. Your proposals for that corridor are good ideas and I would also like to see some effort towards reviving rail services that have been cut (EG, Toronto-Owen Sound) that can act as local feeders for future high, or higher-speed (see: https://en.wikipedia.org/wiki/Higher-speed_rail)
rail corridors. When I visit a country with high-speed rail, I’m less impressed with that service itself and more with the conventional rail network that supports it. Canada does not have this at the present time.

You bring up a good point that I mentioned before, but not in this post: a network of rail and bus routes to connect with higher-speed rail. The intercity bus system in Ontario has been decimated over the past three decades; high-speed rail to London or Windsor won’t be as useful as it could be without connections to places like St. Thomas, Goderich, or Fergus/Elora. A 300 km/h high speed railway might skip Brampton and Guelph altogether, limiting its utility.

I was just reading the Preliminary Business Case, and pdf pg 7, immediately ran into the Missing Link issue. I could barely believe what I was reading, and at least in this part of the report, they avoid mentioning it as such. (I’ve yet to read the entirety in detail) I’ve searched the PBC in both Adobe and and Document Viewer for “missing link”, and get no hits.

So I Googled the web, “high speed report missing link” which is never an exact science, but none-the-less, the only hit I got was for your article here. And yet this is the massive elephant on the tracks. In a way, it’s good that this comes up, as every time this report is now bandied, the obvious precursor to it must be ‘The Missing Link’. And at the estimated by IBI Group of $5B for the Link is a fraction of the HSR’s $21B,

The Missing Link pays for itself many times over by rendering many projects deemed otherwise necessary for GO as almost redundant. It also will increase freight efficiencies many times over, and release swathes of land for development along present freight corridors in Toronto.

HSR must walk before it runs. Now the really tough question: How to get something as ‘un-sexy’ as the Missing Link back in the news?

Caveat: The Missing Link may indeed be mentioned in the report, I’ve just failed to find it so far, and Googling fails to show a hit for it.

I may have posted a bit too soon, now reading the final report, and the term to search is “bypass”.
That renders:
[GO RER and ultimately HSR services will require a significant increase in the capacity and efficiency of the Kitchener corridor and will only be possible if the majority of freight traffic bypasses it or is removed, allowing it to become a predominantly passenger corridor. The government’s preferred option is to build a freight bypass in return for Metrolinx assuming ownership of the portion of the Kitchener line currently owned by CN. This proposed solution has been termed “rail rationalization.”

On June 14, 2016, the Province announced an agreement-in-principle with CN that began technical analysis and planning for the construction of a new freight line. When built, the bypass will separate the majority of freight and passenger services, allowing CN to shift its traffic between Georgetown and Bramalea to the new freight line, as there is insufficient space in the corridor to provide for both freight and passenger services. Once it is complete, Metrolinx will own the entire Kitchener corridor and have sufficient flexibility to meet its GO RER commitments. HSR will also be able to successfully operate on the corridor once the majority of freight traffic is removed.]
– pdf pg 26

It appears that by mentioning that, and that there’s been no progress visible on even the “agreement in principle” with CN alone, QP has provided a loaded condition to be leveraged with to promote the Missing Link to the federal Infrastructure Bank or a PPP arrangement of some other sort (Infrastructure Ontario?) to build the basement before flashing pictures of the grandiose new helicopter pad for the roof.

[…] people have raised concerns about the proposal, and I recommend reading John Michael McGrath and Sean Marshall on this. You can also read the whole plan, which was completed in December and released last month. […]

There used to be high-speed rail travel between Toronto and Montreal during the 1960’s. I think it was called a Turbo Train or something like that. It didn’t last very long because it cost too much to maintain the track to the standard required to enable the train to travel at top speeds, as I recall. When the train was achieving full speed it was difficult for people to get up and walk. I think it could travel at speeds of over 100mph ( it was the 1960’s).

Yes, the Turbo Train. It wasn’t really a high-speed rail service as it used conventional tracks. In later years, it had mechanical problems and was replaced by new VIA LRC equipment, also capable of higher speeds (up to 125 MPH) but kept to 95-100 MPH because of track conditions and the many level crossings en route.