The streetcar returns to Detroit – but who benefits? 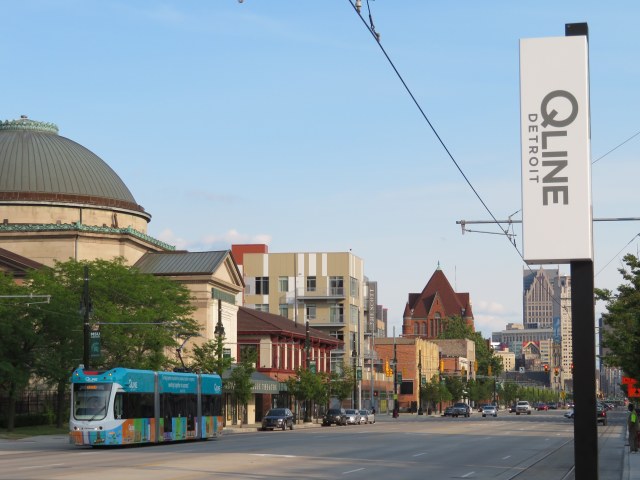 I grew up in Brampton, a suburb of Toronto. Our family could not justify long, expensive vacations, but we did make several trips to Detroit and the region, usually to visit the Henry Ford Museum and Greenfield Village. We’d stay at a hotel outside Detroit, usually one with a swimming pool. Besides the museum visit and the pool, my parents would usually include a stop at an outlet mall. We’d also drive through Detroit itself, sparking my enduring fascination with the city.

Since my first visit in the mid-1980s, the Hudson’s Department Store has been demolished, the Michigan Central Station has been permanently closed and allowed to deteriorate, and several downtown skyscrapers have closed and been abandoned. The city itself continued to lose population as more auto plants closed in the city and surrounding suburbs, and city services declined.

But on recent trips, on my own or with friends, we started to see the beginnings of what looked like a comeback. New downtown baseball and football stadiums, followed by new office buildings, the re-opening of the long-abandoned Book-Cadillac and Fort Shelby Hotels, the opening of the Detroit Riverwalk and Dequindre Cut multi-use paths, and new residential development Downtown and Midtown.

On the last trip to Detroit, my wife and I stayed downtown, at a hotel in the David Whitney Building, a formerly-abandoned office tower. We walked around Downtown Detroit and Eastern Market, visited the famous Art Deco Fisher Building, and went to several museums, including the Charles H. Wright Museum of African-American History, and the Detroit Historical Museum, both of which had special exhibitions marking the 50th anniversary of the 1967 Detroit Rebellion (also known as the 12th Street Riot). We ate at great local restaurants as well.

And I went back to the Henry Ford Museum and Greenfield Village, both of which were as fun and as interesting as I remember.

We also took the new QLine Streetcar. It was a fun ride, and I’m happy to report that the service was well used by both residents and tourists alike. But I have some serious concerns as well.

I’ve been skeptical of new streetcar lines that have opened in the United States. In early 2015, I drove down Interstate 75 to Miami, stopping at four cities that were either in the process of building new downtown streetcar routes (Detroit, Cincinnati), or had already completed their own systems (Atlanta, Tampa). I was especially disappointed by Atlanta’s streetcar, a new, modern line that was slow, infrequent, and not very useful. I also wrote a similar article with these thoughts for the Guardian.

I was a little more hopeful for Detroit’s new streetcar project for several reasons: it operates in a straight line along an existing major corridor (unlike those in Cincinnati or Atlanta), serving several major trip generators, and because it would be a symbol of Detroit’s efforts at an economic comeback. At one time, Detroit had an extensive and well-used municipally-owned public transit system, but due to the construction of new Interstate highways, the suburbanization of Detroit, and the pressure of the auto industry, the last streetcars ran on the 53 Woodward Line in 1956.

From then on, transit cuts continued as the city’s population declined; a fragmented bus system (many Detroit suburbs have poor or non-existent transit services) has resulted in stories like James Robertson’s. He walked 21 miles (34 kilometres) a day between his Detroit home and his suburban job, using Detroit and suburban buses for only parts of his trip.

The QLine Streetcar, which opened in May 2017, runs for 5.3 kilometres (3.3 miles) on Woodward Avenue — Detroit’s main street — with twelve stops north from Congress Avenue, near the riverfront and financial centre — to Grand Boulevard, at New Center. Fares are $1.50 one way, or $3.00 for a day pass. Hours of operation are somewhat limited — it operates only until 11:00 PM most nights of the week, and until 8:00 PM on Sundays, operating every 15 minutes on average.

The majority (60%) of the QLine Streetcar operates off-wire, using lithium-ion batteries; only the central section has overhead power, and several stations also have overhead charging stations. There are six streetcars in the fleet; the Brookville-built low-floor streetcars themselves are 20 metres long, slightly shorter than the TTC’s older articulated ALRV streetcars.

The QLine was built by a private, not-for-profit firm backed by local business leaders like Dan Gilbert of Quicken Loans, and other private corporations such as Olympia Development (part of the Illitch Family empire that owns Little Caesar’s Pizza as well as the Detroit Red Wings and Tigers).

The QLine at Campus Martius in Downtown Detroit. Note the overhead charging station

The QLine corridor along Woodward Avenue serves many of Detroit’s most famous and important cultural and educational institutions, including the Detroit Institute of Arts, Wayne State University, and the Detroit campuses of the University of Michigan and Michigan State University. It will also stop at all of Detroit’s major league sports venues, once the Red Wings and Pistons move to the new Little Caesar’s Arena this fall.

Detroit’s streetcars are definitely more useful and are certainly faster than Atlanta’s, and better used. But I still have many concerns and criticisms.

Firstly, the QLine does nothing to help Detroit’s public transit problems. In Metro Detroit, there are no rapid transit lines, despite a metropolitan population of over 4 million. The buses that do exist are not properly integrated, often requiring a transfer at a municipal border. Municipal governments do not cooperate with each other. The legacy of racial segregation lives on, fifty years after the 1967 Rebellion.

Currently, transit services in the Detroit area are provided by four separate systems:

A certain level of fare integration exists between DDOT and SMART (a 50-cent transfer charge between the urban and suburban systems), but there is no fare integration with either the People Mover or the QLine streetcar.

There have been some efforts to improve the situation over the years, with very limited results. In 1967, the State of Michigan created the Southeast Michigan Transportation Authority (SEMTA) which operated a commuter rail line as well as the suburban bus network that was later renamed SMART. But it never fully integrated with DDOT, partially owing to mutual distrust between the various municipal governments and the state. Also, SEMTA did not have the same authority given to other state transit agencies such as New York’s MTA, Philadelphia’s SEPTA, or Boston’s MBTA to provide a common transit system. 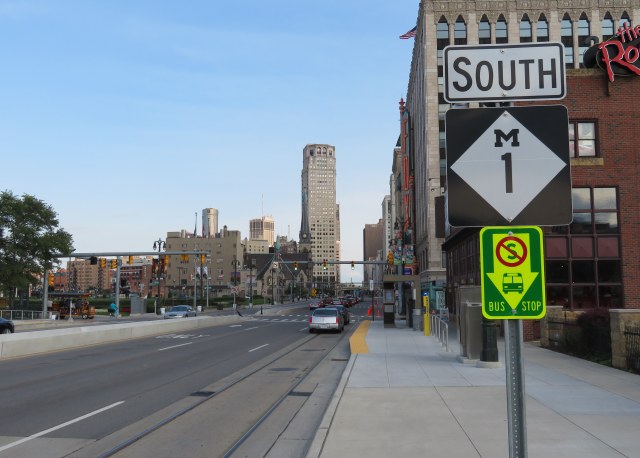 The QLine Streetcar shares the curb lane of Woodward Avenue with DDOT and SMART buses, but is not at all integrated with those services.

In 2012, the Regional Transit Authority of Southeast Michigan (RTA) was created by the State of Michigan, again to coordinate transit services. The RTA proposed bus rapid transit on four major corridors, commuter rail between Ann Arbor and Detroit, new local and express bus routes, including improved transit to Detroit’s international airport, and better paratransit services. In the 2016 election, voters in four Detroit-area counties rejected the tax measure required to fund these proposed services by a narrow margin (a majority of voters in Wayne County, which includes Detroit, and Washtenaw County, which includes Ann Arbor were in favour; suburban Oakland and Macomb Counties voted against).

Currently, the only visible evidence of the RTA’s existence can be found on three limited-stop RelfleX bus routes on Woodward and Gratiot Avenues. These two routes, operated by DDOT and SMART, operate seven days a week, connecting Downtown and Midtown Detroit with suburban regions, but run every 45-minute frequencies between buses.

The QLine Streetcar is subject to traffic disruptions and blockages

The QLine, which operates on a small section on Woodward, competing for riders with DDOT, does not help solve Detroit’s fragmented transit system in any way. Because it runs mostly along the curb, it is subject to traffic delays, and unlike legacy streetcars, it can be blocked by illegally stopped vehicles. It is not possible to develop the short streetcar line into a rapid transit LRT system given the existing infrastructure.

A northbound QLine Streetcar loads at Grand Circus Park, near the Fox Theatre

What the streetcar can do is attract young, and more affluent riders that would not consider taking the bus. That is not necessarily a bad thing if it helps drive overall transit usage, but since it is not part of the municipal system, it cannot serve most transit users. And it’s part of a potentially disturbing trend: as Downtown and Midtown Detroit see new private investment, and new younger and more affluent (and white) residents move in, the neighbourhoods outside of these areas remain ignored. Government subsidies might pour in to help build a new hockey and basketball arena, but Detroit Public Schools continue to be in crisis. That’s not healthy for Detroit’s renaissance.

I have mixed feelings about the QLine Streetcar. On one hand, it does link most of the city’s most vibrant neighbourhoods, many important employment areas, and its main post-secondary educational institutions. For some residents, it may make taking transit more attractive. But it is not integrated at all with the rest of the transportation network, and is of little use to most Detroiters. The streetcar was built by and for private interests, who may or may not care about the wider needs of the Motor City.

The QLine does little for Detroit’s neighbourhoods, which have been neglected for over fifty years.