On the CBC radio program Metro Morning on March 28, Toronto Mayor John Tory spoke about his concerns regarding Premier Doug Ford’s plans to upload the city’s subway system, as well as Ford’s intentions to build new subway extensions to Richmond Hill and Scarborough Centre, bury the Eglinton West LRT, and start the long-planned Relief Line. Instead of a conventional subway, the Relief Line envisioned by the province would use a “new technology,” despite planning and engineering underway for a subway, using an existing subway yard for Relief Line train storage.

But Tory, who has been passive so far about the province’s plans, was hopeful that the unspecified new technology proposed for the Relief Line would be a “fantastic bonanza” for Toronto, but he added that he didn’t know for sure what would come of the new plan.

Mayor Tory tells @metromorning he's prepared to hold out hope that the province's unspecified new tech for the Relief Line is a "fantastic bonanza for us. But I don't know."

It is curious that Tory called this hostile takeover a “fantastic bonanza.” Bonanza was a long-running Western television show, starring Lorne Greene as the patriarch of the Cartwright family, owners of a vast ranch on Lake Tahoe. Bonanza was famous for its theme music and opening credits, which featured a burning map of the Cartwrights’ Ponderosa ranch before introducing the cast.

Bonanza’s burning map is a great metaphor for Toronto’s transit planning. Newly elected mayors and premiers burn the maps left behind by their predecessors, and time is wasted on new feasibility studies and engineering reports, ready just in time for someone else to get elected with yet another idea. Plans come and go, but hardly anything ever gets built.

There’s plenty of blame to go around. After a prolonged spurt of subway construction in the 1950s, 1960s and 1970s, momentum was lost. In the 1980s, Bill Davis’ Progressive Conservatives insisted on a novel linear-induction rail system for Scarborough, rather than the light rail project already underway. The Liberals, under David Peterson, proposed several subway lines, though it was scaled back under NDP Premier Bob Rae. In 1994, work started on the first phases of the Eglinton and Sheppard subways. When Mike Harris’ government was elected in 1995, they cancelled Eglinton, filling in a hole already dug for the tunnel boring machines.

There was new hope in 2003, when a new Liberal provincial government was elected, and David Miller, an urban progressive, became mayor of Toronto. While the province’s top priority was the extension of the Spadina Subway to York University and Vaughan, it was willing to help fund major improvements to GO Transit, along with new light rail systems in Ottawa, Kitchener-Waterloo, Hamilton, and Mississauga-Brampton. It also committed to Miller’s proposed Transit City LRT network, including a fully grade-separated replacement of the ageing Scarborough RT.

There were valid criticisms of Transit City — there were too many transfers to get around the top of the city, there was no Relief Line, and a few of the proposed lines, like parts of the Jane and Don Mills LRTs, were too difficult to build as surface rail projects. But because of Miller, the Eglinton-Crosstown LRT is well underway, and preliminary work continues on Finch Avenue West.

Work would have also started on the Scarborough RT replacement and expansion and the Sheppard East LRT, had Rob Ford not been elected in 2010, promising “subways, subways, subways” and burning the transit maps for which new projects were planned and being built. Seven funded LRT stops in Scarborough became three unfunded subway stops. Overestimating Rob Ford, and hoping to keep seats in Scarborough, the Liberal government folded to his demands, and work stopped on the LRT replacement.

Rob Ford’s disastrous term was followed by John Tory’s twin obsessions of SmartTrack and an austerity agenda, at a time when the Yonge and Bloor-Danforth subways were overwhelmed by demand caused by a growing population and a booming economy — hardly the conditions that demanded low spending on civic services and infrastructure and yet another half-baked transit plan.

Tory promised that it would only take seven years to build SmartTrack, which would mostly use existing railway infrastructure, along with a new section of track in Etobicoke, on land already sold off for development. Tory’s insistence on SmartTrack further delayed momentum on the Relief Line. Though Tory remained committed to the Scarborough subway extension over the approved and funded LRT, it was reduced to a single stop as costs ballooned, while the subway and SmartTrack threatened to cannibalize each other. We don’t hear much about SmartTrack anymore, but at least Tory has come around on the Relief Line.

But Doug Ford’s latest musings make it clear why the planned subway upload is so dangerous. 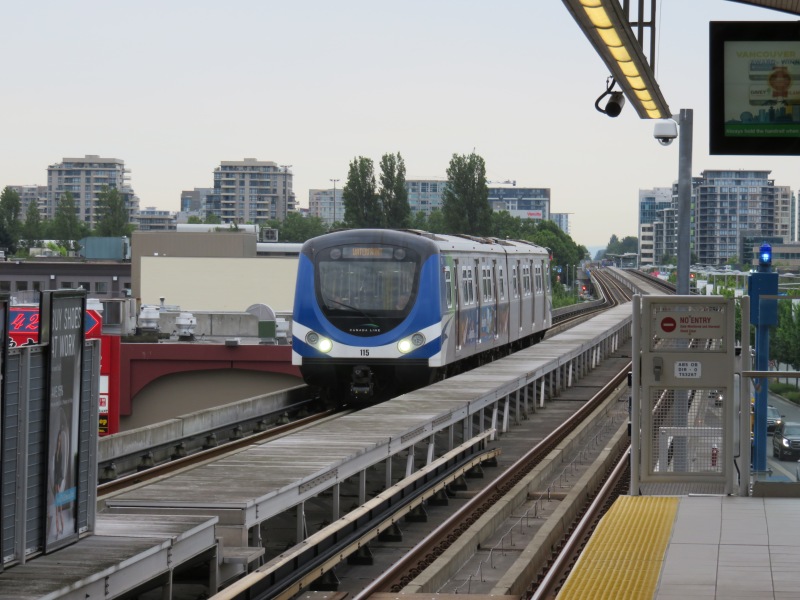 So what now for the Relief Line?

Despite the inevitable Simpsons monorail jokes (Doug Ford did promise a monorail on Toronto’s waterfront when he was a city councillor in 2011), the new technology the province is considering is likely an automated light metro line, similar to the Canada Line in Vancouver. The Canada Line links Vancouver’s city centre with the international airport and the suburb of Richmond. It was built as a private-public partnership (P3) project, in which a private company was contracted to design, build, and operate the line. It’s an attractive option for a conservative government: P3s promise to be cheaper to build and operate than a conventional public project.

But the Canada Line has problems. Though trains are frequent, it was built too small to accommodate growth. The outer terminals at Vancouver airport and Richmond-Brighouse are both single track/single platform. Station platforms are too short — only 40 metres long — to increase train sizes. And as many stations are underground, it’s too expensive to extending platforms to fit larger trains. Some relief is coming, but even then, the maximum capacity of the Canada line is 15,000 persons per direction per hour, far less than Vancouver’s SkyTrain lines or Toronto’s subway. If this is the route Toronto takes, it won’t be long before the Relief Line itself will need relief.

Once again, I fear that Toronto will continue to spin its wheels thanks to the Ford circus. And it’s a shame — though sadly not surprising — that Mayor Tory isn’t fighting back.