On February 26, 1920, Ontario’s provincial highway network was born. That year, 16 highways were established across southern Ontario, between the Ottawa and Detroit Rivers. These highways, previously maintained by townships and counties, connected the province’s largest cities and provided important links to Quebec and the United States.

In 1925, these highways were assigned numbers 2 through 17, in rough order from west to east. There was no Highway 13; instead, the Port Hope-Peterborough Highway was assigned Route 12A. Highway 2, alternatively known as the Trans-Provincial Highway, extended from Windsor to the west to the Quebec border in the east, continuing eastwards as Quebec Highway 2. (That province renumbered its entire highway system in the 1960s and 1970s.) Meanwhile, Highway 15, connecting Kingston and Ottawa, took a deviating “S” shaped route via Perth. Highway 7 only went as far east as Brampton. While the province used triangular highway markers at the time, in 1930, they were renamed “King’s Highways” and assigned crowned highway shields still in use today.

The map below illustrates the highway system at the time. 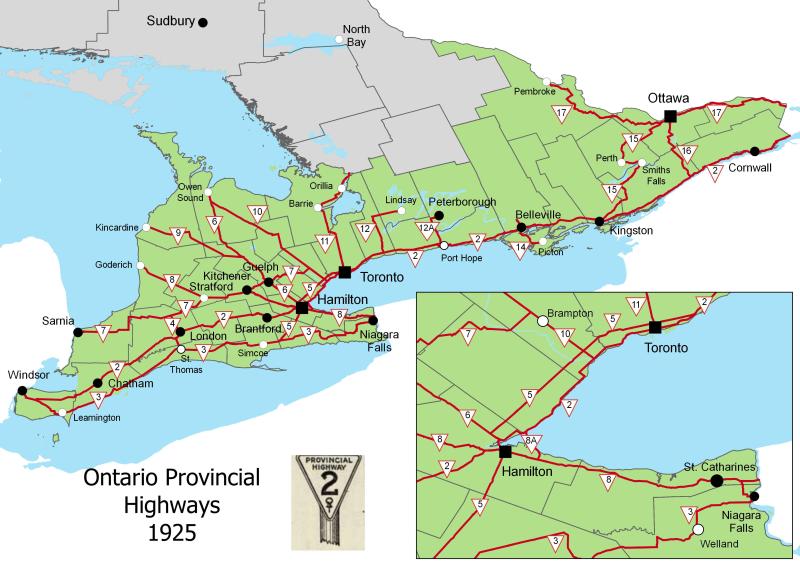 Several of Ontario’s first highways no longer exist. Highway 12A was later renumbered to Highway 28; that first section was later downloaded to Northumberland and Peterborough Counties. The first section of Highway 14, which originally ran between Foxboro and Picton via Belleville, was later integrated with the longer and more important Highway 62. The short stub of Highway 14 between Foxboro and Marmora was also downloaded in the 1990s.

But Highway 11, formed out of Yonge Street and the Barrie-Muskoka Highway, eventually became the province’s longest and one of its most famous highways (even if it never was the world’s longest street). To mark the occasion, I wrote about Highway 11’s history for TVO.

If you’re interested in learning more about Ontario’s highways, nearly 100 years of digitized provincial road maps are available on the Archives of Ontario website. I also suggest visiting The King’s Highway website, which contains histories and photographs for most of Ontario’s highways.