On Sunday, December 17, 2017, the TTC opened the long-awaited $3.2 billion Toronto-York Spadina Subway Extension to York University and the City of Vaughan. The extension of Line 1, which included six new stations, opened over two years behind schedule largely due to construction-related delays. It was the first subway to extend beyond Toronto’s boundaries; York Region is now pushing for another subway extension up Yonge Street to Richmond Hill.

Unfortunately, fare integration between the TTC and suburban transit agencies was never completely worked out, despite many years’ notice that this would be an issue once the subway extension was opened. A new GO Transit terminal was built at Highway 407 Station, meant to handle GO Transit’s many buses currently serving York University. York University and York Region Transit (YRT) signed an agreement that YRT would remove its buses from campus after the subway opened. There was an assumption that transit riders destined for York University would simply transfer to the subway, but measures to prevent those riders from paying a second fare were never worked out.

And now York Region is withdrawing its buses from the campus as of September 2, 2018. While Brampton Transit won’t be withdrawing completely from York University, it will reduce some of its service. For now, GO Transit will not be making any changes to its bus routes serving the campus, and will continue to serve the York University Commons.

Many YRT passengers will have to pay the whole $3.00 each way, or be required to make a new transfer and/or walk a farther distance from the north terminal at Pioneer Village Station.

The fact that there’s no fare agreement to allow YRT passengers to ride the subway from Vaughan Centre to York University without paying a full TTC fare is indicative of the failure to fully coordinate regional transportation in the Greater Toronto and Hamilton Area. And York Region’s complete abandonment of what used to be one of its most important hubs is indicative of that region’s lack of commitment to funding transit operations adequately, despite its ambitious capital spending and lobbying for subway extensions.

Previously on this blog, I wrote about some of the issues with the subway extension that remained unresolved in late 2016. York University was (and remains) eager to remove the hundreds of buses from its central University Commons area; the expensive Highway 407 Station was built with the sole purpose of providing a transfer point between GO buses and the subway. At that time, there was not yet any fare integration between the TTC and connecting transit agencies such as GO Transit and YRT.

It was expected that most passengers headed to York University would have to take the new subway extension, yet no one knew if GO, YRT, and Brampton Transit customers would have to pay a TTC fare for what was a one-seat, one-fare ride.

By October 2017, two months before the subway opened, there appeared to be some answers. YRT and Brampton Transit would continue to operate bus routes into York’s campus, on the Ian Macdonald Boulevard ring road, so that university-bound passengers won’t be required to transfer to the subway and pay an additional fare. The province announced a new $1.50 TTC fare discount for GO Transit passengers paying by Presto card. GO Transit also announced that it would not be making immediate changes to its service.

For many years, York University has been a transit hub for the TTC, GO Transit, YRT and Brampton Transit. The campus is located just south of Steeles Avenue, the boundary between the City of Toronto and York Region, and is a major trip generator, with thousands of students, faculty and staff taking transit daily to and from the university. The 501 Züm Queen route, opened in September 2010, is a major reason why Brampton Transit now has the fastest ridership growth of any transit agency in central Ontario

The subway extension eliminated the need for the 196 York University Rocket, a busy bus express route that connected to Sheppard West Station. The extension has also benefited many commuters in northwest Toronto and Vaughan. It connects with seven TTC bus routes, including the busy 36 Finch West, as well as GO Transit buses on the Highway 407 corridor, nine YRT routes, and Brampton Transit.

But for YRT, GO Transit, and Brampton Transit passengers, the subway hasn’t saved any time. For the first eight months after the subway opened, those agencies’ buses continued to serve York University rather than terminate at the new subway stations as was originally intended. Last October, GO Transit wanted to assure their customers that services would continue, and that both York University and GO Transit would provide lots of notice of any future changes. For GO Transit riders, the status quo will continue for now, as they are working on a long-term plan.

But for YRT passengers and some Brampton Züm customers, this will change in September. YRT will be removing all of its buses from the campus property, as well as cutting back its Viva Purple route from York University to Richmond Hill terminal. It also eliminated the planned express Route 100 that would replace the western portion of Viva Purple to the campus from Richmond Hill Terminal, citing a budget reallocation. 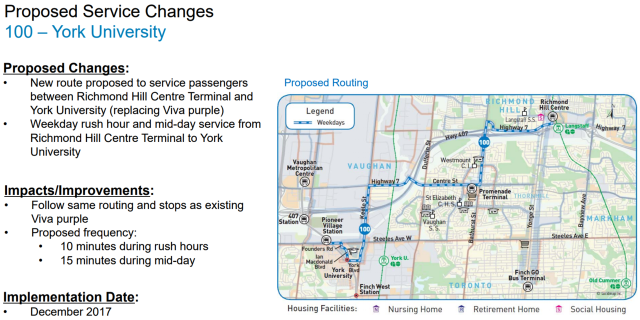 The planned YRT Route 100 that would have provided a direct service from the Richmond Hill Centre terminal to York University. In September, passengers must make two transfers to make the same trip to Pioneer Village Station.

YRT’s changes will require York Region commuters to either pay a TTC fare to get to campus, or make an additional transfer and walk 10 to 15 minutes from the Pioneer Village Station bus terminal on the north side of Steeles Avenue. Brampton Transit will continue to serve York University, but only the 501A and 501C branches, reducing service to York University by half on weekends and late weekday evenings. This will affect Woodbridge residents who ride the 501 to campus.

It’s clear that York Region has abandoned its riders, especially with the “restructuring” of Viva Purple, an euphemism for a service cutback. There’s no reason why Viva Purple couldn’t continue to Pioneer Village except that York Region has been stingy with funding transit operating costs despite building expensive new bus infrastructure.

It’s also worth noting that York Region is not providing any operating funds towards the new subway. It should not be up to the City of Toronto, which is stuck with any operating deficits, to solve this problem.

York Region’s service cuts would have been less of an issue if there was  proper regional fare integration. A double-fare should not be necessary to access York University — after all, there wasn’t one before. With Presto fare cards, it should be simple to facilitate discounted fare or free transfers from stations within York Region (Vaughan Centre, Highway 407 and Pioneer Village) to York University with a tap-off capability.

The last Liberal provincial government promised some fare integration — a discounted fare when transferring between TTC and 905 systems — in the 2018 budget, paid for by proceeds from the new cap-and-trade program. But that plan was eliminated when the Progressive Conservatives moved to end cap-and-trade.

In summary, there is plenty of blame to go around once YRT commuters are stuck paying double or making long walks. There’s York Region, which has not properly funded YRT service, nor pushed for a fair fare agreement for York University commuters. YRT itself has continually cut service levels on many routes, and will be making yet another service cut with the “restructuring” of Viva Purple. York University has been eager to remove buses off its campus, but it hasn’t addressed the consequences of that for many of its students and staff. It is, after all, a commuter school. And, of course, there’s the provincial government and its agency, Metrolinx, which hasn’t come up with a solution before it was too late.